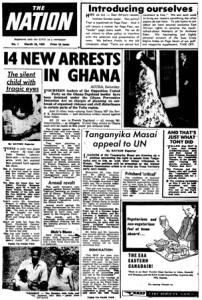 INSIDE STORIES
BY THE WAZEE

The word wazee means elders in Swahili. In some tribes they were the governing council instead of a chief. The elders were undoubtedly respected by all.

No.1 March 20, 1960
Here we are – East Africa’s newest, liveliest Sunday paper. Our policy? That is explained on Page Four. And it will remain a matter for Page 4, our “leader” page every week. For we do not intend to allow policy to interfere with the selection and presentation of news. We believe firmly in the old newspaper adage “Facts are sacred but comment is free.” We aim each week to bring our readers something the other papers do not have. To add lustre to our debut we have secured exclusive East African rights to serialise the much-talked-about Memoirs of Sir Anthony Eden. His fascinating and highly personal account of the Suez Canal begins today on Page Seven of our pull-out magazine section, TIME OFF.
This publication has been made possible by the articles provided by former Nation journalists and the writings and obituaries of colleagues who have gone before us.

I am indebted to an old friend (as in long-time)
Mike Parry for immense editing help and support. Thanks also to Gerry Loughran and Jack Beverley.

Dedicated to anyone who ever had anything to do with making sure The Nation stable of newspapers were published every day!
Once upon a time …
Gerry Loughran did quite a brilliant job with his celebratory tome Birth of a Nation The Story of a Newspaper in Kenya, produced to mark the 50th anniversary of the Nation which first rolled off the presses in Nairobi on 3 October 1960. Same day in 2020, The Nation will celebrate its 60th birthday.
With Gerry having covered almost every conceivable bit of the Nation story, you would think that there would not be much more to write about… wrong. As my old News Editor Mike Chester (he was sadly deported in clear case of mistaken identity) used to tell his charges: There is always a story to be found if you dig deep enough (after having done your homework, of course).
Individually, we have often remembered some of the men and women who collectively made up the Nation family, our colleagues, our friends, or just ships passing in the Kenyan night, a billion stars and all. I thought it might be an idea to bring as many folks as I could to come together with a story or two to remember in print some of the folks who once worked for the Nation.
The lists below are only an amateur attempt and rely mainly on the collectively memory of former Nation colleagues I have been in touch with over the years. The experiences related in these pages are those who answered the call. There were other who chose not to. I have restricted our memories of those who were there between 1960 and 1975… a little more than the time I spent there.
Enjoy.

How it all began … 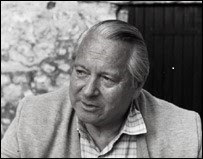