Thank you Goans, thank you world!

I apologise for the seemingly interminable stories and pictures about my book ... yes, I know it seemed to go on and on. Equally, I would like to thank the many, many people who responded. My only excuse is that for a first-time author it only happens once in a lifetime (the first time). So far, Yesterday in Paradise has taken on a life of its own thanks to the folks in Goa, India, Canada, USA, UK, and various parts of the world. I am humbled and grateful that so many of you have, and continue to, read my little effort. I could not have done it without you especially ... Braz Menezes (Matata trilogy), Mervyn Maciel (Bwana Karani and From Mzee to Mtoto), Sultan Somjee (Bead Bai and the recently released Home Between Crossings), Frederick Rico Noronha (publish and the unofficial patron saint of Goan literature), Vivek Menezes (the Goa contact, co-curator of the highly successful Goa Arts and Literary Festival, journalist and many other talents), Vijay Badhwar (who continues to push me along), Gerry Loughran (Birth of a Nation and other stories), the Goan media,Goan Voice UK, Alex Figueiredo for his courage and heaps, and heaps of other people who had anything to do with the book. However, there is one guy that I will always admire: Merwin D'Souza of the Dr Ribeiro Goan School Ex-students Association. Merwin and the Ex-students Association have been absolutely brilliant in promoting the book in Canada. I cannot thank them enough.
So will the never-ending story come to an end soon ... I hope not. perhaps there is life in it yet but I will try not to bore my faithful readers of this FB page and my blog. God Bless.
- December 28, 2016 No comments:

Cyprian Fernandes: The tribute to my late mother Yesterday in Paradise!

highlight and Open Link with right click
- December 26, 2016 No comments:

Goans, the utter radicals in Kenya Times of India

Goans dominated in the colonial administration of British-ruled Kenya, Uganda, and German Tanganyika.
The story of Goan migrants to East Africa is among the most astounding episodes in Indian diaspora history. A tiny percentage of migrants from the subcontinent (themselves never more than five percent of the overall population), pathbreakers from the Konkan, played an outsized role in colonial expansion, and then the anti-colonial push for independence. Aquino de Braganza was a crucial ideologue and negotiator for Mozambique's freedom fighters. A G Gomes invented the 'gomesi', now national dress in Uganda. But most incredible is the record and legacy of Goans in Kenya.

'Yesterday in Paradise' by Cyprian Fernandes is an elegiac but no-holds-barred chronicle of when "Goans dominated in the colonial administration of British-ruled Kenya, Uganda, and German Tanganyika...the colonial administration would have collapsed but for the skill and management of the Goan clerks and accountants. Later, doctors, chefs, musicians, dentists, motor mechanics, coolies, carpenters tailors and workers with other skills joined...In semi-tropical Kenya, Uganda, and Tanganyika they found an even larger paradise than they could have ever imagined. Until 1963, they enjoyed life with a gusto that could only have been found in their beautiful Portuguese-ruled Goa."

Fernandes deserves congratulations and lasting gratitude for 'Yesterday in Paradise'. It is a book only he could have written, including anecdotes and perspective, which remained unwritten for decades after being bullied out of Kenya. His wife was warned "dear lady, get him out of this country today. They are going to kill him. They have a bullet with his name on it". Happily, those anxious moments led to a happy ending. Now the veteran journalist is peacefully settled, counting blessings, "I have woken up each morning and my prayer has been 'thank you, Goa. It's great to be alive, in Australia. Thank you'."

It's little known - and even less understood - how important Goan migration was in the making of modern native consciousness across the British and Portuguese maritime empires. Fernandes correctly attributes this pioneering spirit to "eighteenth-century Pombaline Reforms and the sense of equality by which Goans regarded Europeans in the nineteenth century. Burton stated that it is 'No wonder that the black Indo-Portuguese is an utter radical, he has gained much by Constitution.' The Goan attributes of public philanthropy and community service grew out of the pre-Portuguese Goan concepts of communidade (community) and were revisited by the European enlightenment. This concept was very important to the community of Bombay and was carried to the segregated highlands of Kenya by such people as Dr Rosendo Ribeiro and Dr A C L de Sousa."
Recommended By Colombia


When the end of colonialism appeared on the horizon, a handful of Goans helped lead the way for Kenya. Pio Gama Pinto "broke the apartheid rules by entering European restaurants and hotels in Nairobi and Mombasa in the early 1950s. As a result of his efforts...non-whites were finally allowed access to such places." Gama Pinto was "an ultra-national Goan Kenyan freedom fighter. The other was Fitz de Souza, lawyer, constitutionalist, parliamentarian and deputy speaker." Son of a Goan father and Maasai mother, Joseph Murumbi Zuzarte was "freedom fighter, one of the architects of Kenya's constitution, the biggest player in the legal defence of the Kenyan leadership in detention during the Mau Mau insurgency, [set] up the network of the Kenyan diplomatic corps, Kenya's first Foreign Minister, Kenya's second Vice President."


Like other Indians in East Africa, Goans struggled to stay on in the post-colonial environment and the majority migrated to the West. A significant number came home to India. But Fernandes reports, "there is one group of people who deserves Kenya's collective applause: the Goans who remained. I am not sure that those who stayed after everyone else had left did it for reasons of commerce and business, or that they could not fathom living anywhere else, or because some of them were genuinely dedicated to the betterment of the country if not the people. Whatever the reason, the eternal survival instincts of the Goans have allowed them not only to prosper but also to become one with other Kenyans."


Wonderful irony that Goans who once pushed the colour bar in one direction - insistent on parity with Europeans - now tip scales in the other, conceding no ground in the definition of African. Much the same happens everywhere. Cyprian Fernandes - self-described "addicted to living by my wits and by the seat of my pants" - speaks for an entire community, "I am a man of many parts, from many places...Kenyan dust runs through my veins and resides in my DNA, which means my body will always be Kenyan but, while I have left my heart in Kenya, my soul belongs to my country of adoption, Australia." Yet, "the Goan in me will only die with that last sunset".

The second in the trilogy has just been published and is available on Amazon and Createspace:

Cyprian Fernandes: Maureen and Nev: celebrating art and literature, and life in Goa. 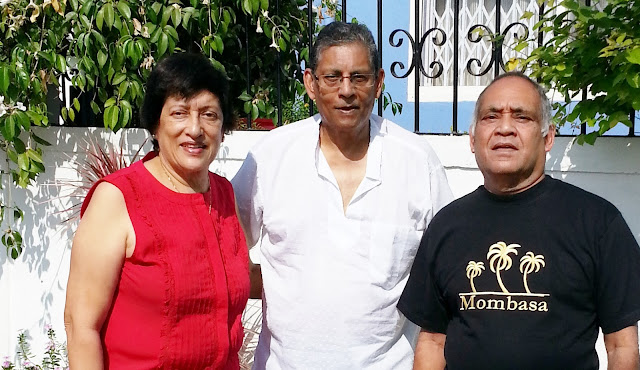 IN the early 1970s, the Goan community was shocked by a horrific motor car accident that claimed three young lives: young lovers Avena D'Sa and Derryck D'Mello and Shafu Butt (?). They were all vibrant members of the Railway Goan Institute.

As an investigative reporter I had come to handle death as just as another part of the job, nothing personal. On this occasion, however, I fell apart. I loved these three kids. We did so much together: with his sister Maureen (pictured) they were a part of everything we did together, the hugely successful anniversary variety show (everything, the scenery, the music ...) the picnics, the fishing trips, and all of the things young folk do. I was slightly older and they looked up to most of us seniors.

I could not handle it at all. Until the funeral, I locked myself up in my bedroom and was lost in a void of my own making. At the funeral, I could not condole with Derryck's wonderful mum and dad or put a consoling arm around Maureen. In fact, it was not long before I stopped going to the club somewhat. I never asked what happened or how it happened. Until now.

I found Maureen D'Mello in Pilerne with her terrific husband Nev (Nevett) D'Souza with whom she built a beautiful life for her children Leanne and Mark. On Wednesday for the first time I listened as Maureen with her heart breaking recalled that fateful evening. At last, I have closure on a nightmare that has haunted me for 46 years.

Nev, a former teacher, headmaster, a poco Italiano who taken Maureen and the children on the beautiful safari of his life as sought new challenges with Maureen who is a willing in any endeavor Nev undertakes. She developed her own skills: painting on canvas, or porcelain, on any material that takes her fancy. She is today a magical artist and she is still blooming because artists never stop flowering.

Nev has also developed a love of antiquity especially books and arts. He also loves modern classics and I had pleasure of listening and introducing me to some of the gems that continue to pleasure his senses of thought, imagination and discovery.

Mark who began designing computer games is now pursuing success in the advertising field at a very high level in London.

Leanne is married to a young hotelier genius Werner (?) and together they have built the Santana Resort on Candolim Beach which is today one of the premier attractions. Tell your friends, tell your folks, if you are coming to Goa, Santana is a little heaven for you. Next door used to be their world famous Calamari ... but the family still treated me to a dinner on the beach that was everything I wished (very Calamari) for and the second time I lovingly surprised by the cuisine. I had similar experience at Leila Athaide's where she served an enchanting vegetarian meal. I share Maureen and Nev's pride in their children and their grandchildren.

With a bit of luck I may get to see Olive, Maureen's mum in Panjim.

I can sleep a little easy and find solace in prayer for family and friends who have left us.
- December 15, 2016 No comments:

Very humbled by this report of the launch of my book!

Kul's take on the book

Emiliano Joanes Have camera, will shoot A Masai woman arrives to collect water during a drought and finds the river bed dry   Two Masai ...