Sultan Somjee: One who dares

to dream is a prophet

One who dreams is called a prophet 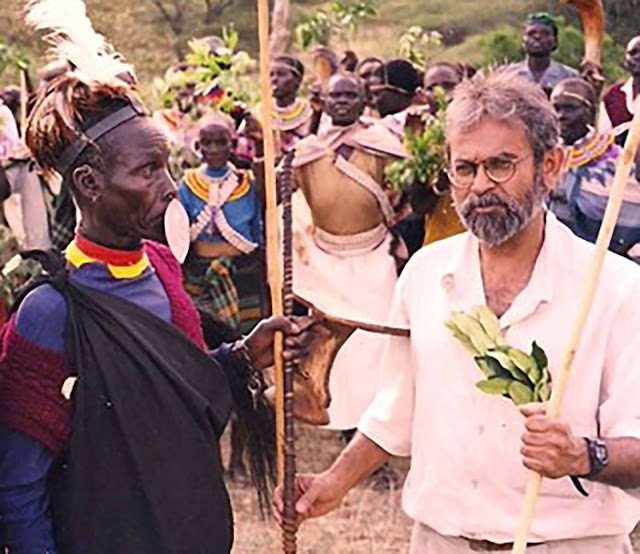 Author Sultan Somjee who now lives in Burnaby, Canada, accepting a peace staff and leaves of a peace tree from a Pokot Elder 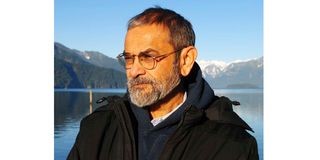 This book is not for peace sceptics or peace unbelievers. Academic Evelin G. Lindner sums it up quite nicely and others have given comments on Sultan Somjee’s work in similar voice, especially, the venerable author and academic Prof Ngũgĩ wa Thiong’o, who spoke in a glowing voice at the virtual launch of the book in November 2020.

Dr Lindner, the founder of Human Dignity and Humiliation Studies, writes: The book “is indispensable reading for every citizen of this world who wishes to work for a worthwhile future for our children. Somjee presents his profound insight into the peace building traditions of Africa (my words: particularly Kenya, Uganda, Tanzania, South Sudan) in a deeply touching narrative of dignity and humiliation. Reading this book is a life-changing experience.”

Even as child, a schoolboy at St Teresa’s Boys’ School in Eastleigh, Nairobi, Somjee was always a thinker. He was a quiet classmate and someone everyone called a friend. He was a dedicated student, too. However, he was not much into sports or the social hijinks some of his other friends got up to each day. He was special, but we did not know exactly just how special he was. He has Kenya’s red soil running through his veins, even though he now lives in Vancouver, Canada.

One Who Dreams is Called a Prophet is a work of fiction but anyone who knows that the protagonist, old man Alama, is Somjee or a representative of everyone who has walked the path of seekers of peace during conflicts, especially his assistants. Central to the Kenyan peace experience are the peace museums which are home to traditional cultural artefacts of peace such as the Pokot woman’s waist belt called leketyo, going back a long time. All these are described in the book.

Every page has a charm of its own. Here’s a little sample. “Alama was so excited that he forgot about the woman with the calabash. He would put his questions with caution lest he offended the wise one of the Council of the Sovereign Tree of Peace. When he was little his mother used to tell him. “If it is wisdom you seek from the elder, then ask as if you are eating hot ugali. If you plunge your hand in the middle of the steaming cake, you will get burned. You break hot ugali from the side, a little at a time.” Little by little I will draw wisdom from the Mukwe man, thought Alama.

“I beg you my age mate, please give me the knowledge of where peace exists.

“Let us walk west together. I must reach the Council of the Sovereign Tree of Peace before dusk,” said the Mukwe elder as he picked up his staff ready to walk. Alama’s finger tapped to count the four-notched bulges along the banded waist cloth that had the bills. Then he felt the sharp edge of his plastic identity card at his navel alongside the mother knife and horn container, all tucked into the folded cloth band. He was ready to walk now but he did not see Koko Kigongo at the spot by the fire that belonged to the woman with the calabash.

Alama looked around the bush, and around the fire again and again. He even went to the rock where had prayed just in case he had carried Koko Kigongo with him to the Dawn prayers …

Every page is filled with poetic wonder. It is another world that we did know existed. There is majesty in the simplicity in Alama’s mighty long search for peace. The good news is that Alama/Somjee found it and you can find the answers in 617 pages of a pure kind of magic.

For four decades, Sultan Somjee has worked on material culture. He introduced learning about indigenous knowledge through material culture in the Kenyan school curriculum (1985-1990). While he was the Head of Ethnography at the National Museums of Kenya, Somjee started village peace museums.

The museums highlight indigenous languages, material culture and the arts used over generations for reconciliation and social cohesion. Today, the peace museums have spread from Kenya to Uganda and South Sudan as a people-to-people civil society movement.

In 2001, the United Nations named Somjee one among the only twelve ‘Unsung Heroes of Dialogue Among Civilizations’ worldwide in recognition of his work. In 2002, Somjee was appointed on the Global Advisory Board of Human Dignity and Humiliation Studies.

One Who Dreams is Called a Prophet is inspired by the author-ethnographer’s journey into the world of material culture, storytelling, indigenous African knowledge and nature that describe Utu, Swahili for ‘being mtu’ or simply ‘being human’. All over traditional Africa, the principle of Utu or Ubantu is used in reconciliation and sustaining peace.

Somjee wrote a few years ago: “I started working on Kenya’s material culture in early 1970s at the Institute of African Studies, University of Nairobi. My work centred on collecting, exhibiting and teaching that did not involve the communities whose artefacts I was gathering and using. They were the subjects of research, not the participants.

“Then 20 years later in 1994, having collected thousands of objects, made over 20 exhibitions ranging from ten to 60 items, and having worked among many ethnic groups, and having taught and introduced the teaching of material culture in the school curriculum, I began working on a Kenyan Material Culture Project with a different goal. The difference was on the focus that changed to the role of material culture in inter-ethnic face-to-face meetings. The project covered eight pastoralist groups.

“It was at the National Museums of Kenya where I was the Head of Ethnography that we began exploring knowledge of peace building that inhabit cultural memories... This material became the nucleus to develop the new Kenyan Material Project that was initiated in 1994...We then documented this information, organised, and presented it back to the communities to foster conversations both within and across ethnicities.”

Many stories about reconciliation were told. In real life, the little boy from Eastleigh has walked many thousands of miles in search of peace heritage among the indigenous people, may he continue to do so many more thousands of miles to sustain his dream.

Somjee, In the beginning: In the mid-1970s while working with workers and peasants who were the backbone of the rural theatre at Kamirithu (Ngugi wa Thiong’o described this as bringing the theatre to the people as opposed to people coming to the theatre), I was confronted, as it were, by community-based knowledge, creativity and power of the collective intellect vis-a-vis the Western academy I was trained in. I came to understand how ‘grassroots work”, so often idealized in academic tests and workshops, was done. I became immersed in the embodied arts of the worker-peasant drama group speaking to itself and to the authorities at the same time.

Their bodies and voices expressed historical memories in their mother tongue questioning the misinterpretation of their culture, history and the legitimacy of the kinship rulers who kept them divided and poor. In that, it was a civil society formed around the arts. Jomo Kenyatta’s paramilitary razed the theatre, but they could not erase Kamirithu from our memory.

While setting up museums of peace during the conflicted times of the 1990s. I used the Kamirithu methodology. I remember Ngugi wa Thiong’o and Ngugi wa Miri, the writers of the banned play Ngahika Ndeenda. I remember Kimani Gecau, it is director and acknowledge the Kamirithu community with gratitude for setting me on a life-long journey where the community is the school.

It was not always an easy ride. Ngugi was Thiong’o spoke at length about Somjee’s heroism in the face of persecution by successive governments. Somjee may have even saved a few lives by helping frontline colleagues escape to nearby African countries. He writes: “Along the way we faced obstacles like sometimes the repressive government would not allow us to plant peace trees to manifest and commemorate a site of massacre.”

Secret police would monitor workshops and Somjee and the members of his team would often be followed by these secret policemen. However, many of his students and assistants continue the walk today despite enormous difficulties.

“The continue to dream and expand the project with occasional funding from NGOs ad through people-to-people efforts across cultures and borders. They are the proud curators and initiators of their own community museums of peace in Kenya, Uganda, and South Sudan,” Somjee writes.

Their journeys gather, save and pass on community narratives about wide-ranging found in material culture, storytelling, songs, dances, parables and riddles. For generations these varied indigenous arts and language traditions have informed villages how to live as communities with other communities, according to Somjee.

“This book is about my journey with my field assistants and student curators. It is told in one voice as one continuous journey that merges many voices and many journeys over a period of 30 years.”

According to Somjee: “The curators (of peace museums and other peace projects) are the true prophets because they dare to dream amid inequality and injustices, misrule and corruption that has gripped Kenya for decades and does not seem to go away.