A Star Next Door 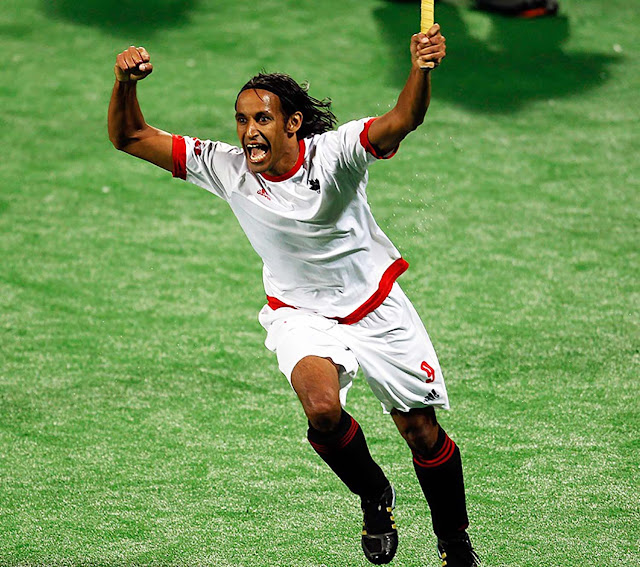 Ken is the son of Hubert & Audrey Pereira (originally from India, with relationships in Dar & Kampala).  Ken is also the nephew of Uganda star cricketer Charlie DeSouza. (Field Hockey Canada)

Field Hockey Ontario is happy to share the sixth of many posts in our new series of content titled "Where are they now?" This series will highlight alumni from FHO, their playing, coaching, and umpiring careers, and what they are doing now. We are happy to introduce our sixth individual, Ken Pereira. Please enjoy this write-up on Ken's Field Hockey experience and what he does in the present, as written by Ken himself.

Ken was first introduced to hockey through Charlie and Johnny D’Souza, Ken’s uncle and cousin. He was 16 and played for the GOA junior team. He continued playing with the GOA Golds, with his brother Chris, and then played for the GOA Reds. He began playing for Ontario at the U18 level. He broke into Team Canada via the indoor team, playing in the 1993 Glenfiddich International in Scotland. He was then given a shot on the outdoor team in 1994, at age 21, and never looked back.

Ken played in many major competitions, 1995 Pan American Games, 1998 Commonwealth Games, and 1998 World Cup, but the competition that really put him on the map for Canadian hockey fans was the 1999 Pan American Games in Winnipeg. In a quintessential Pan American final, it was a Canada vs. Argentina battle. Ken scored the game’s only goal, late in the first half, making no mistake with a loose ball in the circle. The photo of Ronnie Jagday and Ken celebrating his goal is a Canadian field hockey classic and was the inspiration for the Field Hockey Canada logo.

Ken went on to play in the Sydney Olympic Games, living out his childhood dream. Shortly thereafter, after playing in his second Commonwealth Games, Kenny picked up his indoor stick again, this time to play in the first Indoor Pan American Cup - the qualifier for the 2003 Indoor World Cup. Team Canada didn’t drop a point through the entire competition and sailed into the Indoor World Cup, where they finished 5th - the highest the Canadian Men have placed at a World Cup. Ken again competed in the 2005 Indoor Pan American Cup and, on home court in Kitchener-Waterloo, Canada won the tournament with a 5-3 win over Trinidad and Tobago in the final, securing their spot in the 2007 Indoor World Cup.

It was around this time that Ken moved to Holland to play in the Dutch League. Ken played for 5 years with top club HGC, and in his final year, secured the EHL Championship in 2011 with Canadian teammate Rob Short. Ken also played in the India Hockey League in 2012, captaining the Pune Strykers to the finals.

After a few more years of tours and tournaments, the 2007 Rio Pan Am Games couldn’t come soon enough for Ken and his Canadian compatriots. Canada squeaked out the narrowest of wins against Argentina in the final, with a sudden death penalty stroke victory, earning a spot for the 2008 Beijing Olympics. The Canadian team then went on to qualify for the 2010 World Cup.

It’s hard to find career highlights after five Pan American Games, four Commonwealth Games, one EHL championship, three Indoor World Cups, two World Cups, and two Olympic Games, but Ken managed to add a unique feat: he was the first member of a team sport to be named a Canadian flag bearer at the Commonwealth Games, leading Team Canada into the opening ceremonies of the Delhi Games in 2010.

Soon after in 2011, Ken, along with Rob Short, broke the legendary Bubli Chohan’s record for most international matches for team Canada. He finished his outdoor career with 348 international caps.

He captained the Canadian team at the 2014 Indoor Pan American Cup to victory and played another Indoor World Cup in 2015. Ken, at the ripe age of 47, continues to play indoor with the national team - they are currently waiting on COVID restrictions to lift to play in the next Pan American Cup, the World Cup qualifier.

Nowadays, Ken still plays hockey but has shifted gears with his day-to-day, working as a medical attendant/ patient transfer driver. Ken, along with his partner Leigh Sandison (another Ontario hockey vet), became parents in 2020, and are looking forward to their little boy picking up a stick. Ken has definitely missed his hockey coaching family (John Desouza, Lou Mendonca, Reg Pereira, Cass Mendonca, and Sean Pereira) during the pandemic. Over the last few years, Ken has been heavily involved with coaching all ages in the provincial outdoor program and indoor national program with this crew of coaches. Ken also coaches many schools in the Toronto area and his own club, OKD.

Ken looks forward to COVID restrictions being lifted and continuing to give back to the sport that gave him so much.

Thank you, Ken, for sharing your experience with the FHO Community. Now you know where Ken is now!