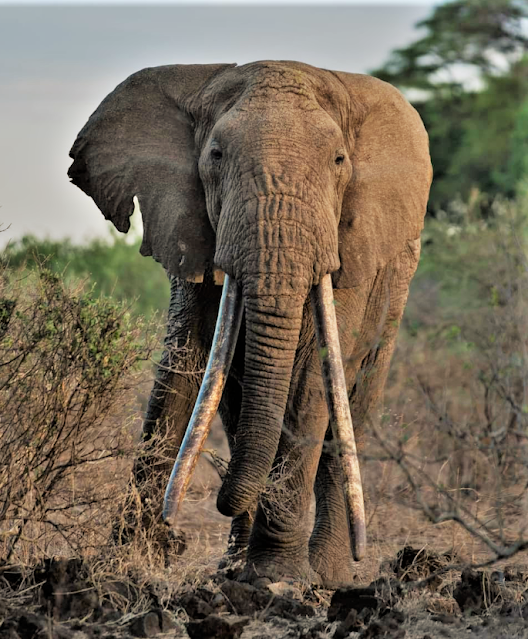 From a friend: A former student of mine who lives in Kenya sent me this sad item on the death of one of Africa's few remaining "Super Tuskers".

It is with great sadness that today we report on the death of IL Talal, one of Tsavo’s most iconic and well-loved super tuskers.  He was well known for his long symmetrical ivory that touched ground. He was a shy elephant and often in the company of 2 or 3 other bulls (his askari’s or bodyguards). He lived close to human settlements on the edge of the Tsavo West National Park.

We first caught wind that IL Tala had been suffering from a suspected spear wound in late Feb. Our partners MWCT informed us immediately and two treatments have been carried out since with the KWS veterinary unit (supported by DSWT). IL Talal seemed to be making a good recovery. He was monitored daily by MWCT scouts and all seemed ok, but sadly he died last night. The post-mortem diagnosis confirmed that IL Talal died from a twisted colon, which is believed to sometimes occur after heavy rains bringing on an abundance of succulent plants, which has been the case recently.

Tsavo Trust has been enthusiastically monitoring IL Talal for the last 8 years and MWCT has known him for the last 20 years.

here are positives to be taken from the death of IL Talal: he has lived a full life and died in his twilight years; he has also undoubtedly spread his tusker genes widely; he has brought together conservation partnerships (such as the Tusker monitoring carried out by MWCT & TT - Big Tusker project) and his ivory was recovered (and did not fall into the wrong hands) as a result of this consistent monitoring.

Check out these tusk statistics!