Kuldip Raj Sondhi: Death of a legend in Mombasa 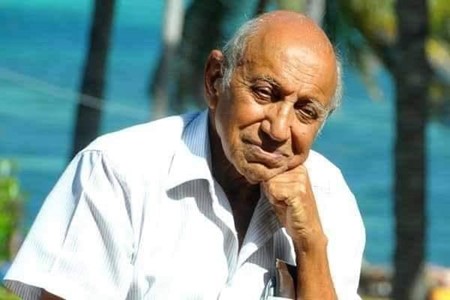 Kuldip Raj Sondhi was born in Lahore Punjab in what was then India in 1924.

He was the Little Theatre Club board of Trustees Chairman, hotelier and play writer. Among his 10 plays written when he was already in his 70s all were produced to great acclaim at the little theatre club in Mombasa. His themes were brave takes on multicultural mixed African Indian European love stories that were often Taboo subjects not always comfortable for the audience at the time.

After taking a break from being a handsome beach bum and writer when he started his family he began one of his many enterprises that were to become his legacy as a hotelier.

He was brought to Mombasa Kenya as a young boy with his grandmother and they moved into a house near the railway station. Kuldip’s mischievous behaviour worried his mother enough that she decided to send him and his brother Jagdish to India to boarding school.

In what was not uncommon in those days they did not return to Kenya for 8 years or see their parents all that time. In 1942 at the height of the second world war Kuldip was admitted to university in New York. He crossed the Atlantic with a convoy of 70 ships to New York. Only after arriving did they find out some of the ships in the convoy never made it having been sunk by German submarines.

He graduated with a aeronautical engineering degree in 1946 and went to England and joined the prestigious firm of Bristol aerospace working on turbines. It was in London that he met his future wife my mother Aase Jorid Haugberg. She was a post war nanny from Norway working in London .

Kuldip soon regretted the decision to migrate to England finding its colonial attitude to people of Indian descent uncomfortable and demeaning so he decided to return to Kenya. A few years later and many letters delivered by ship helped to convince my mother to follow her Indian Prince to Africa and she took the steamers across the Mediterranean down the Suez Canal and into the port of Mombasa. By then Kuldip’s brother and sister were all settled as well in Kenya. .

Soon after their reunion in Kenya they moved in together and tied the knot. Kuldip veered away from his engineering education and discovered his passion for writing and went on to write many short stories and was awarded several BBC prizes for his radio plays.

In 1972, he opened the Reef hotel in Mombasa and continued to build and manage several hotels over 50 years.

He passed away in Mombasa inside the Reef Hotel facing the gardens he loved so much with the Indian Ocean breezes over his body. His legacy is a testament to the multiple influences of the Western and Eastern, Western and African.

Dr. Peter Odote past Chairman Little theatre club says this about Kuldip Sondhi: Very sad day indeed. Kuldip was a pillar of strength in play writing having started with award winning radio plays. When I adopted his award-winning play on BBC " Beach Access" in 1997 for the stage at Little theatre club there his appetite for writing stage plays grew and he wrote about 10 plays for the theatre. With a background in aeronautical engineering, it is amazing how he juggled his life through the hospitality industry and the Arts. As a trustee of Little theatre club, he lived the part. May his soul rest in eternal peace.