ONE OF my life’s regrets will always be that I never interviewed Ladis Da Silva of Zanzibar. He was born in Zanzibar in 1920 and passed away in Canada in 1994. Silly really, because he was in Kenya until 1968 when he left for Canada with thousands of other Goans. Various Goans had mentioned his name in conversation but between 1960 and 1966 Sport and all its wonder made me a prisoner, a willing prisoner. There was little room for art. Ladis worked brilliantly with oils and acrylics, pen washes and renderings which appear identical to woodcuts. He had many art exhibitions but two I remember being told of was at the Catholic Parochial School and the other at the Dononvan Maule theatre, bother in Nairobi. He was an authority on Zanzibar and a prolific writer. On my several visits to Canada, our individual moons were in separate orbits. I had a copy of his book Zanzibar but unlike a boomerang, it never came back. He has a superb list to his credit. He was a brilliant artist and highly respected writer. Regret. The excerpt for Zanzibar gives the reader quite an entre into his observations skills and reportage.

Ladis Da Silva (1920-1994)Born of goan parents on the island of Zanzibar, off the coast of East Africa, on 11 April 1920, Ladis Da Silva combines in himself two notable accomplishments: he is a consumate artist who before World War II worked with oils, water colours and acrylics to good effect, and later concentrated primarily on pen washes and renderings, which appear identical to woodcuts; he is also a writer of note having published books and written extensively on his work. He was educated at the Sir Euan Smith Madressa School up to the Leaving Certificate where he studied Gujarati, Marathi and Sanskrit. He then joined St. Joseph's High School for Advanced Studies under the Holy Ghost Fathers where he acquired his basics in art. In Zanzibar he was the founder-member of the Zanzibar Arts and Crafts Society under the aegis of His Highness the Sultan and the British Resident. As an assistant scout-master still in his teens he was asked to handprint the programmes on the occasion of the official visit of Sir Baden Powell, Lady Powell and their daughters for the Great Jamboree in 1935. The Programmes have been preserved in the Scout Museum in London. Emigrating to London in 1941, he founded the Goan Arts Society and was elected its President. He was a member of good standing of the exclusively European "5 Arts Club", "The Indian Christian Arts Society" and "Paa Ya Paa", the Kenya National Cultural Centre. In Nairobi he held several one-man exhibitions. His first was at the Parochial Catholic School Auditorium after the Second World War and his last at the foyer of the famous Donovon Maule Theatre on 30 January 1967. Several of his paintings were purchased by visiting tourists as they represented the wildife of Kenya. Ladis da Silva emigrated to Canada in 1968 where he specialised in the Native Indian and Inuit Art. His articles and detailed work which sensitively and accurately capture the sprituality and cultural traditions of the native people of Canada, have regularly appeard in the Toronto Native Times. His art. he has published three books (non-fiction) containing his own illustrations, namely the Americanization of Goans; Legendary Chandor and St Francis Xavier. His latest book captioned An Island Kingdom, an extensively researched work on the history of the Omani Dynasty in East Africa was published in the USA.

I WAS born in a fairly well-to-do family in Zanzibar in 1920. Zanzibar is an island off the coast of East Africa. Many writers, authors like Sir Richard Burton, Sir John Kirk, W.H. Ingram, Krapf, Speke, Sir Lloyd Mathews, Dr Livingstone, Sir Arthur Hardinge, L.W., Hollingworth, have, in their books and autobiographies, called this island the “Spice Island” or the “Emerald Island” of the Indian Ocean. The island is bordered by golden sands, surrounded by a deep blue Indian Ocean, a few atolls, fringed with the romantic coconut palm trees. I used to paint these scenes in colour from my young age … and even inspires me now.

Like Darwin’s Galapagos, the island is rich with the tropical flora and fauna. History has blazed this into international recognizance from the fifteenth and sixteenth centuries. Navigators like Vasco da Gama, Luis Da Camoes, Affonso de Albuquerque, and several others, as we have already read previously, found their sea route from Europe to the Indies, invariably they all made Zanzibar their calling place for food, fuel, water and repairs. Explorers like Dr Livingstone, Stanley, Speke, Sir Richard Burton, also glamorised this place.

Very close to our heart is our patron St Francis Xavier, who landed in Malindi on July 28, 1542, and a detailed account of this was given to me previously. There still exists a chapel in Malindi where he said Mass when the Portuguese fleet was at anchorage there. Quite a number of Goans who went to Mombasa from Zanzibar made it a point to visit Malindi and see the chapel and Vasco Da Gama’s lighthouse. I have visited the chapel and the nearby graveyard several times.

The famous buccaneer Captain Kidd is said to have sought refuge around Zanzibar, Pemba and the surrounding islands, to hide from the British, who were looking for him. It was also rumoured among the natives that Captain Kidd had buried his loot and treasures on some of these islands around Zanzibar and Pemba. Treasure hunters from various nations are still searching for these lost treasures. Many of these treasure trove hunters claim they had found a map drawn by the buccaneer himself and still continuing their endless search for the treasures. Some have ventured as far as the Seychelles Island. 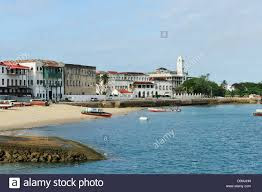 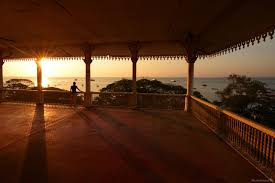 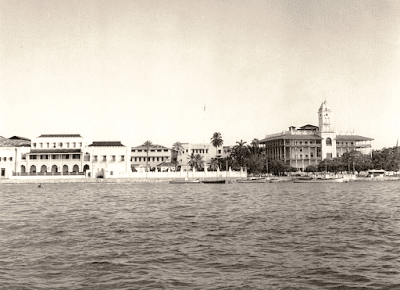 Zanzibar in those early days was the “nerve” and “earning” centre of East Africa. It eventually became a “spending centre”, as it grew more and more prosperous in its trade and commerce. With the British setting up their administration headquarters in conjunction with treaties signed with the Sultan of Zanzibar, they had the privilege from the Sultan to use Bet-el-Ajaib, meaning the “House of Wonders” for this purpose. This magnificent palace on the Zanzibar seafront is a very impressive edifice and was built during the reign of Sultan Said Bargash in the years 1870-1888. Beit-el- Ajaib is a palatial mansion and towers above all the other buildings. It has a clocktower which is used as a look-out tower for incoming and outgoing vessels. From this town, one can see for miles and miles in all directions. The architecture of this palace is unique in that it is in the English style and it is supported by massive pillars and has a few old cannons at the entrance, In addition to this, it has an antiquated elevator.

Whilst on the island during my young days it was rumoured by the natives and the Arabs that the Sultan built two other palaces, which were all connected to Beit-el-Ajaib by secret passages; the palace on the left with a small enclosed park was used by his harem and later became a school for Arab girls. The main palace of the Sultan was built at the seafront on the extreme left of Beit-el-Ajaib. The natives also said that Sultan Bargash killed all the artisans and skilled workers who built this famous palace as he thought in the whole of East African there was no building to compare it with … and he did not want a substitute to be built. He was proud of his great achievement and wanted everyone to know about it.

The British utilised the Bet-e;-Ajaib for several years until the “revolution” by Africans which overthrew the Arabs.

The British had the offices of the Secretariat and Establishments, the Treasury, the Audit and several other sections of their administration housed in this palace. Renovations were made and telephones installed during my time. I can well imagine what it was like in those early days when the British did not have any such facilities! I also recall how visitors to Zanzibar never left the island until they took a guided tour of the Beit-el-Ajaib. Since the Palace could not house all the administrative offices of the “Customs” and “Wharfage”, “Passages”, “Shipping” etc were accommodated in other palatial buildings not too far away from the main palace.

All key positions in the British Administration Offices were held by the old English “bards” and “lords” and “barons” and ex-civil servants from the India British Government. These ex-civil servants were transferred from Indian to East Africa, as they had the experience and expertise in running an administration. In Zanzibar, however, they had to reorganise everything from scratch.

Being in Zanzibar, I had the opportunity to learn several languages (oriental and occidental) and, naturally, the African. I learnt Kiswahili, the native language of Zanzibar, since my birth. This proved invaluable to me in other parts of Africa. Thereby I acquired a lot of information about Zanzibar, its history, legends and folklore, East Africa and the coastal kingdoms from natives and Arabs. Kiswahili is claimed to be originally a Bantu language and primarily used as a dialect by the Wahadimus of Zanzibar. As the years passed, with different nations ruling the East coast of Africa, or trading in slaves, spices, ivory etc, it slowly assimilated a rich tinge of the Portuguese, Persian, Arabic, Indian and even the English language. The intermixture brought about a rich, pleasant and very courteous language which reminds us of the French language. Kiswahili to this day is being used through Eastern Africa. I have formed my own opinion about this rich, exotic language … it is full of finesse and courtesy, which was the result of Indian and Arab influence of several years.

Since the Arabs had made East African their permanent home and did not want to return to Oman and Muscat in Arabia, they had no choice but to learn the native language. They came in contact with the natives on their plantations and in trade and commerce, slave trade, and so it was inevitable that happened. Strangely, Arabic which was their mother tongue was seldom spoken, even in their homes, where the women and the slaves spoke only Kiswahili. Arabic was spoken at royal barazaas at the Sultan’s palace and very few special occasions.