THE PRINCE AND THE POMPHRET

(from conversations with Martin, son of Sebastião Rodrigues).

Mel D'Souza is a retired Canadian Goan living in Brampton, Ontario. He is a self-taught cartoonist and illustrator, and enjoys writing about 'characters' that he has met over the years. He is the author of FEASTS, FENI & FIRECRACKERS, a book he has written and illustrated about growing up as a schoolboy in the village of Saligao, Goa, (1947 – 1952) when Goa was an overseas territory of Portugal.

During the era when Britannia ruled the waves, Goan cooks were always in demand in India, the jewel of the then mighty British Empire, and in Britain’s colonies in East Africa. Like their clerical counterparts in the offices of the Colonial Civil Service, they were competent, reliable, and, above all, adaptable.

Having been raised in a strict Catholic environment in rural Goa, then a Portuguese territory, they acquired respect for higher authority and, from their frugal mothers, learnt to appreciate good food and the way it was cooked with loving care.

It is no wonder, then, that Goan cooks found employment readily in hotels, railway diners, passenger ships, the merchant navy, and even the Royal Navy.

Goan cooks adapted well to European cuisine, and many rose to the position of chef. Among this exclusive group were a few who gained renown for their exceptional culinary skills and the introduction of Goan specialties to the fare. One such chef was Sebastião (Sebastian) Benedicto Rodrigues.

Sebastian was born in the village of Moira around 1900 and grew up in a poor family. His father was a “tarvoti”, a ship steward, who worked on a British passenger ship, like many a Goan breadwinner of that era. The wife was left at home in Goa to bring up the children.

Sebastian went to the village parochial school and in his spare time was a “gorvan rakno” – a cow herder.

At the young age of fourteen, a relative took him to Delhi and got him a job as assistant to the cook in a hotel. Sebastian worked diligently and was soon promoted to ‘cook’.

In Karachi at that time, there was a well-known Goan tailor, Trinidade by name, who catered to the rich and famous British elite. He had two attractive and single daughters.

One day, a friend suggested that Sebastian should settle down and start a family, and asked if he would consider a proposal from one of Trinidade's daughters. As a humble cook, Sebastian didn't think he stood much of a chance but agreed that the matchmaker put his name on the list anyway.  Much to his surprise, he received a formal proposal from one of the daughters which he readily accepted. Thus Sebastian married Luizinha, and they were blessed with two boys."

When Col. St. John was promoted to Premier of Jaipur, Sebastian moved his family to Jaipur where they lived for about eighteen years. In 1939, Martin was sent as a boarder to St. Anselm’s European High School in Ajmer, 30 miles from Jaipur.

In 1945, Col. St. John returned to England, but before leaving introduced Sebastian to the Hon. C.L. Corfield, Agent of the Governor-General in Punjab State, stationed in Lahore.

Sebastian worked for Corfield in Lahore, and when the latter came to Delhi as advisor to the British Government of India under Lord Wavel, he brought Sebastian along with him.

Shortly before India gained its independence in 1947, Corfield moved to South Africa, and Sebastian and his family returned to Goa.

When India gained full independence in 1947, Sebastian returned to Delhi.  Foreign countries were beginning to open up new embassies in the capital, and he soon got a job as cook to Capt. William Settle, the US Naval Attache. Barely six months in the job, Sebastian was offered the position of chef to the Belgian Embassy on the recommendation of Mr Corfield who was a friend of the new ambassador, Prince Eugene de Ligne of the House of Beloeil. Sebastian accepted the offer, and moved to the Belgian Embassy.

After a month on the job, Prince Eugene held a diplomatic reception at the Embassy, for which Sebastian was given sole charge. Prince Eugene was so impressed with the manner in which the reception was executed, that he showed his appreciation by having a photograph taken of Sebastian with himself, Pandit Nehru and other dignitaries. Regrettably, the photograph was lent to a relative and eventually lost.

Sebastian worked at the Belgian Embassy in Delhi for about four years – a period that was the highlight of his career.

One memorable episode took place during the Belgian Trade Exhibition in Bombay when Prince Eugene hosted a gala banquet at the Taj Mahal Hotel for the diplomatic community and other dignitaries. Sebastian was put in charge of all the arrangements. This is when Sebastian chose to debut ‘pomphrets’ on the menu.

Now, “pomphret” is a flatfish (pampus Chinesis) with a smooth silvery skin that Goans would usually fry in a pan, but over a layer of straw that gave it a unique and distinctive flavour of a fried/smoked fish.

Prince Eugene was so impressed that he asked Sebastian to demonstrate how the fish was prepared. During the demonstration, the secret of Sebastian’s perfection was revealed when he flipped the fish in the pan with his bare hands, obviously to remove any strands of straw that could burn and mar the pomphret’s silvery skin.

Upon returning to Delhi, the Taj Mahal Hotel requested Prince Eugene to send Sebastian to Bombay to teach their cooks how to cook pomphrets. But Sebastian, who didn’t like the attitude of the European manager (at the banquet during the Belgian Exhibition), turned down the invitation.

Back in Delhi, Prince Eugene would not have any chef cook for him other than Sebastian. And one of his favourite dishes was fried pomphret.

One day, the Prince asked Sebastian about his wife’s cooking, and Sebastian replied that Luizinha was good at cooking only Goan food. The Prince asked if he could try some of her cooking, and Luizinha obliged; she cooked Goan curries, without chillies, and these became a hit with Princess Yolande, (Prince Eugene’s daughter), and her friend, Indira Gandhi. Luizinha also introduced the two ladies to one of Goa’s traditional pancakes, ‘alebele’ (ah-leh-beh-leh); Indira Gandhi loved these so much that she sent her cook to the Belgian Embassy to learn how to cook them.

Sebastian had the best of European life going for him, but like every true Goan, he lacked the company of fellow Goans. After only six months in Brussels, he called it a day and returned to Delhi.

Unfortunately, Sebastian didn’t get to enjoy retirement for very long; he died in Delhi in 1951. 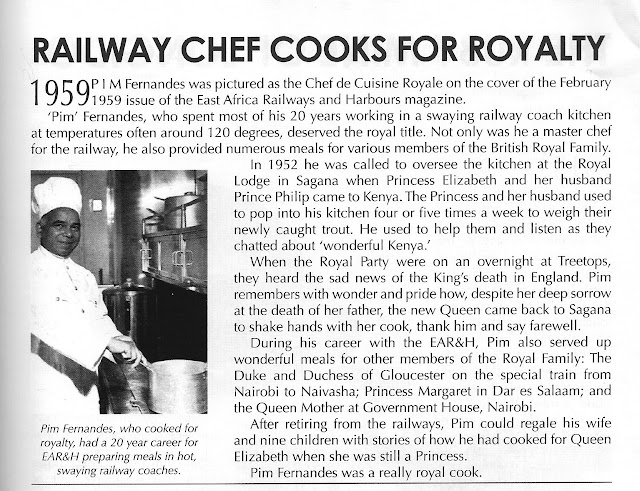