INSIDE STORIES BY THE WAZEE: NORMAN DA COSTA 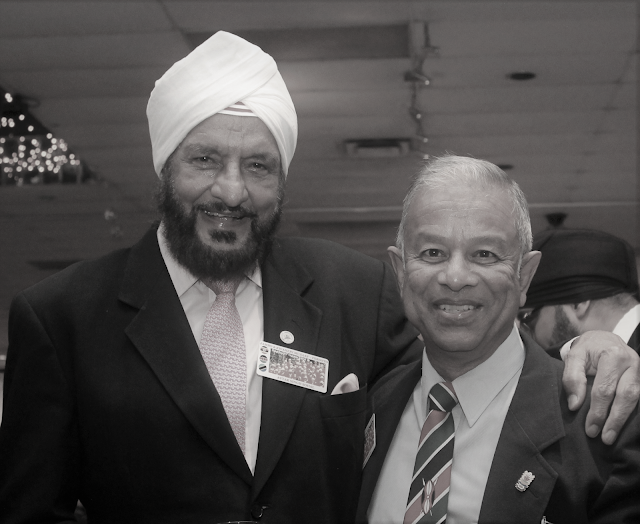 Few are fortunate enough to have their childhood dreams come true. Mine did. And in retirement today I can reflect on a job that brought satisfaction and rewards. How many can say they sat metres away from the Olympic track finish line, occupied prime-time seats at boxing, World Cup soccer and cricket encounters at the most fabulous stadiums in the world?

Since my high school days at Nairobi’s Dr Ribeiro Goan School, I had one goal in mind and that was to become a journalist - and not just any journalist - but a sports journalist even though I had no formal training in this field. But I had a stellar sports career as captain of the school’s field hockey and cricket teams and was a member of the 4x100-yard quartet that in 1963 won the Nairobi schools relay championships. In 1964 my dream of getting into the print media was realized after a chance meeting with sports reporter Cyprian Fernandes and he introduced me to Nation sports editor Brian Marsden.

Marsden was so impressed with my first match story that he assigned me to cover the M. R. de Souza Gold Cup field hockey tournament as Cyprian was away. As Marsden couldn’t offer me a full-time position - he did the next best thing - got me hired at the Sunday Post. Marsden promised he would call me if a vacancy opened up and he was true to his word. He hired me a year later. That telephone call changed my life as working for the Nation with a host of world-class journalists was an unforgettable experience. Rubbing shoulders with the best and also chugging pints of Tusker with the preeminent editors and writers across the street at Sans Chique, the Nation’s popular watering hole will forever be etched on my mind.

No matter the time of day you could be exercising your right elbow with the one and only Brian (Mambo) Tetley, Cyprian, Joe Khadi, Philip Ochieng, Azhar Chaudhary, Jim Glencross, John Gardner, Fibi Munene, Neil Graham and several others. Of course, the list wouldn’t be complete without a mention of our hard-working drivers Peter and Karo, a teetotaler, who would drop you home on those late nights.

Two other colleagues who left a lasting impression were both photographers. One weekend in 1968 I was assigned to cover the national track championships in Kisumu along with Azhar. We spent the overnight train journey by playing a cards game called flush and within an hour or two Azhar had fleeced me of every cent. He crowned that night by nearly scaring me to death. In the middle of the night, as I came off the top bunk to go to the washroom, I saw what looked like a leg blocking the door. It was Azhar’s. I had briefly forgotten he wore a prosthetic leg. Then my other buddy Anil Vidyarthi nearly killed me when we were covering the East African Safari. At some stage during this rally, icons Joginder and Jaswant Singh roared by us on a wet and slippery path and Anil, of course, wanted to overtake them. But the Flying Sikhs got away after we rolled over a couple of times. We were lucky enough to tell the tale and also file in time, but I lost some sight in one eye and had to resort to wearing glasses. It was nice to bump into Anil when on a safari back home in 2019 and we shared a few hearty laughs. It was ironical that on this trip my wife and I stayed at the New Stanley Hotel! This establishment would not serve a non-white prior to an even sometime after independence. But now we were greeted with open arms at a hotel where the service is world-class.

I joined the Nation at a time when Kenya was fast becoming the focus of world attention for producing world-class athletes. A young policeman named Kipchoge Keino was busy blazing a trail of track supremacy. My greatest thrill came in 1972 when the Nation sent a reporter to the Olympics for the very first time and it paid dividends as I was on hand in Munich to record the country’s nine-medal haul. One frightening and unforgettable moment for me came hours after our 4x400 metres relay team comprised of Charles Asati, Munyoro Nyamau, Robert Ouko and Julius Sang won the gold ahead of Britain and France. In a city already reeling from the massacre of the Israeli athletes, I tried to scale a gate separating the athletes’ village and the press village to file my copy. This was a mere 10-minute short cut as opposed to taking the hour-long bus ride. Halfway up that dreaded fenced gate a German guard cocked his gun and barked at me to get down or be shot. The army had been put on high alert after the French team started popping champagne bottles to celebrate their unexpected bronze medal and the gate was closed as they feared another massacre. That’s the only time I can remember wetting my pants.

On that fateful night of September 5, Cyprian and I met with several of our Aussie counterparts who wanted to find out if the press bar was indeed open 24 hours as had been advertised. There was only one way to find out. And the next morning as we stumbled out from the saloon bleary-eyed, we were puzzled with the numbers of helicopters buzzing around and there was total chaos all around us. We were shocked by what had happened overnight. There were a number of endless calls to and from Nairobi that morning as I tried to update this tragic story. And the entire block in the press village I was housed in emptied in a hurry as most of them came from Arab nations and they feared reprisals. Two years later in 1974, the Nation loosened the purse strings and I was back to West Germany again – this time to cover the World Cup.

What a blast as I was also a guest of the foreign department that had sponsored several other journalists from Africa. The highlight of this tour apart from the soccer we got an opportunity to set foot in the Olympic Stadium in Berlin and then being photographed at Check Point Charlie. Our tour guide was a knockout. Silvia Somerlath was very pretty, kind and helpful and went out of her way to keep this bunch happy.

Two years later after landing in Canada, I saw her photograph splashed around in the local newspapers. To my surprise, she had married into royalty and is now Queen Sylvia, wife of King Carl Gustaf of Sweden. While I focused primarily on sports, I got a pleasant shock when our editor-in-chief George Githii, a man I admired as an editor, summoned me to his office and assigned me to accompany the Girimia dancers to Germany and Switzerland. We left on a date I will forever remember. It was June 6, 1968. It was my first overseas flight and on the way to Basle, the captain invited me to the cockpit something that doesn’t happen now. While discussing Kenya, our conversation was cut short by breaking news from Los Angeles that Robert Kennedy had just been shot.  These young Girimia dancers performed to packed halls during a two-week tour and it was nice to see my byline on other than sports stories.

In 1974 I became the first South Asian sports editor of a daily newspaper in East Africa, and later that same year was presented with a gold medal at a ceremony in Barcelona for my contribution to sports journalism by AIPS, the International Sports Writers’ Association. I took over as sports editor from Peter Moll who had succeeded Marsden a couple of years earlier.  Apart from covering every major event in East Africa I met President Jomo Kenyatta on two occasions; interviewed President Idi Amin, who was a former boxing heavyweight champion of Uganda,  President Kenneth Kaunda; British Prime Minister Ted Heath and Princess Anne at Lancaster House in 1974 and, of course, the Aga Khan at Nation House. One other memorable assignment was when Marsden shipped me out to Mombasa for three months. Since the Mombasa Times was closing down the Nation management wanted our newspaper to cash in on its sales and we were housed at the Manor Hotel. I was to concentrate on all sports with the emphasis on soccer while Adrian Begg was sent to cover news items.

I was actively involved as a field hockey player – representing Kenya B on three occasions; a Kenya Hockey Union national selector managed Kenya’s national to India’s Gold Cup tournament in 1975. In between, I formed the Kenya Sports Writers Association and was elected the first chairman of the Nairobi Hockey Association. But much to my disappointment, I had to make a move in 1976. Not being a citizen of the country - although I was born in Nairobi in 1945 - my wife Delphine and three young children – Meryl, Nigel and Elaine – emigrated to Canada just prior to the 1976 Olympics.

That was a tough decision to make with a young family but there were rumblings in the office that the department should be run by an African. A couple of years earlier I had a confrontation with Member of Parliament Martin Shikuku whilst covering the Gossage Cup in Zanzibar. He threatened to deport me for what he termed my negative coverage of his club Abaluhya United. I reported this threat to George Githii, and he laughed, adding I had nothing to worry about as long as he was in charge. Not only was Githii a first-class journalist, but he was also one man I trusted.

After arriving in Toronto, I had a one-year stint with sporting giant Adidas because of my connection with the company’s boss Horst Dassler and then joined the Toronto Sun as its chief soccer reporter. In 1981 I jumped ship to the Toronto Star, Canada’s largest newspaper, and retired in 2009 having covered the Barcelona Olympics, three World Cups, two women’s World Cups, the 1991 Pan Am Games in Cuba and the 1999 cricket World Cup in England. As chief soccer correspondent, I travelled extensively reporting on Canada’s men’s and women’s national teams that included Canada’s Gold Cup triumph in 2000 in Los Angeles and the Confederations Cup in Japan.

The highlight of my journalistic career came in 1989 when I broke the story that had at the time rocked the world - Ben Johnson being stripped of his 100 metres gold. His physician Dr Jamie Astaphan admitted to me that he had administered the banned drug stanozolol days before his historic showdown with Carl Lewis. This story made the front pages of newspapers and television stations around the world and the phone at home did not stop ringing. Prior to that, in another exclusive, I revealed a couple of Canadian soccer players received $1,000 each to throw a game in an international tournament in Malaysia.

I enjoyed a great inning and called it a day in 2009. The enjoyment now comes from spending time with my five grandchildren (Natasha, Matthew, Benjamin, Adalyn and Max) and taking vacations around the world. Retired, but still busy. I am actively involved with the Brampton Sports Hall of Fame; still, pen a weekly cricket column for the Sun newspaper chain; and am vice-president of the 55 Plus Goan Association that has 800 members.