Some of the Goan Pioneers of Kenya!

TO THE KENYA CIVIL SERVICE

Compiled by Johnny Lobo from various sources and clippings

1901 Went to Goa on his first long leave

1911 Took my dad, Evaristo Lobo, to Africa and employed him in the Treasury 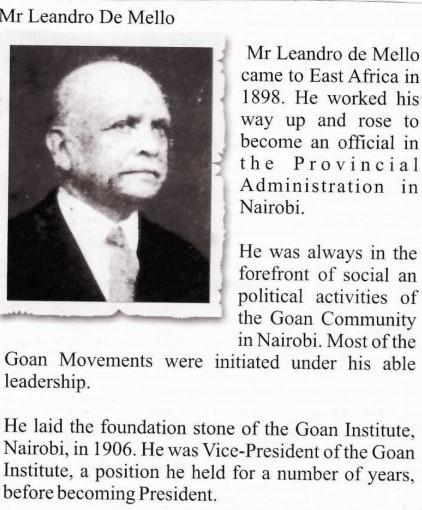 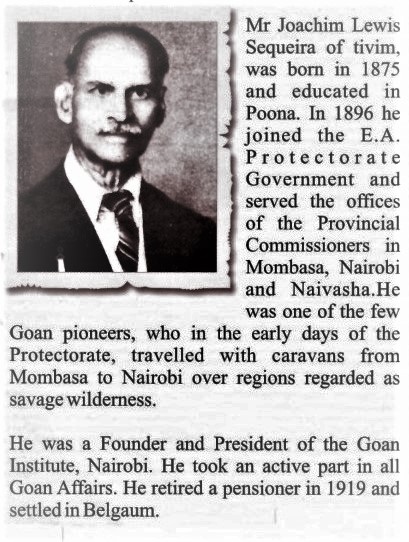 He captured the pioneering spirits of the boys back home when he summarized his experience as follows: “I left Goa for Africa in 1896 when I was barely 21 years old. We landed in Mombasa tired, confused and anxious. I got a job with  E.A. Protectorate Government in Mombasa. As soon as I joined, I was ordered to proceed to Machakos. Since the railway was not complete, we had to walk. The journey started by crossing Makupa Creek by boat and we then walked to Changamwe, which was six miles from Mombasa. From Changamwe to Mombasa, we walked 300 miles at four miles per hour and 12 miles per day. We walked for about 30 continuous days. For company, I had six “askaris” and fifty Swahili porters and two personal servants.”

News has been released that Kenya’s Chief Secretary has selected two Goans to be presented with their wives to her Royal Highness Princess when she visits Nairobi this month. They are Mr Saluzinho Mendes and Mr Paschal de Mello. It is understood that the Government desires to bring to the notice of Her Royal Highness the extent of the loyalty, devotion to duty and the contribution the Goan community have made towards the administration of the Colony.

The community will be proud of the Government’s manifestation of the appreciation of the services of these two Goans. Both possess long, meritorious and varied service in the Administrative Branch of the Service, as will be seen from the following brief history of each of them.

Mr Mendes was educated in Goa and Bombay and joined the Provincial Administration in 1928.  After serving in a number of districts in the Colony in the capacity of District Clerk, and cashier, Mr Mendes was appointed to the post of Provincial Head Clerk. He is the present Provincial Officer Superintendent, Kisumu.    His service in Nyanza earned him recently the  M.B.E. Mr Mendes devotes his leisure hours for the welfare of the community in Kisumu and was one of those behind the scheme which produced the new Goan Institute building there recently.

Mr Paschoal de MELLO MBE: Mr de Mello received his education in Karachi at that well-known institution St Patrick’s and D.J. Sind College. His appointment to the service dates from 1929. After seeing service in a number of stations, including the remote outposts of the Northern Frontier, he was appointed to the post of Provincial Head Clerk Mombasa. Mr De Mello was selected for transfer to the  Establishment Section of the Ministry of African Affairs. Mr de Mello is a prominent member of the community who despite his numerous duties has been closely connected, both in Mombasa and Nairobi,  with the community’s and institute’s affairs. 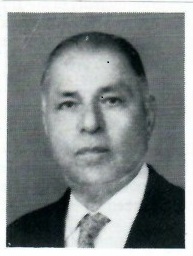 The only known Goan to be President

of a Goan institution (the Mombasa 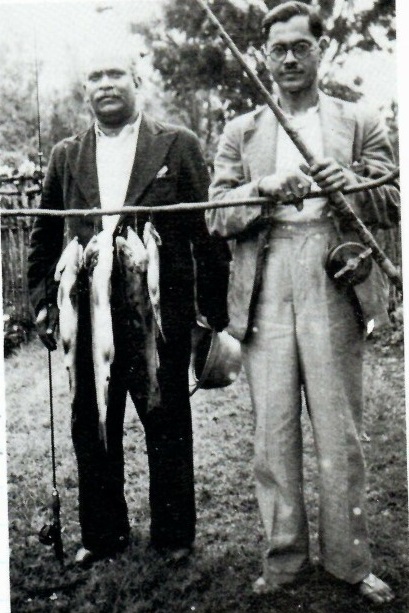 Inspite of the heavy demands of the office and the Goan Gymkhana
there was time for relaxation  founder President R. A. Oliver
and Luzu are pictured after a successful day's fishing

A very staunch and active founder member lived in Forest Road in Villa Menezes. Norbert worked for the Public Works Department. The statue of Christ the King in St Francis Xavier Church in Parklands was donated by the Menezes family. He loved sports and was passionate about helping people. A very good badminton and tennis player too. He enjoyed entertaining and supporting the clubs, travelling and keeping the friendships of a large circle of friends.

He had a congenital foot deformity. He came to Nairobi in 1914 and joined the Accountant-General’s Department. According to R P Abreo “Along with his colleagues S.R. Rodrigues of the Treasury and Leandro De Mello of the Provincial Administration, he was another prime mover in the foundation of the Non-European Subordinate Civil Service Association.  Later called the Asian Civil Service. He adds that “he was an indefatigable work who did a lot to represent the grievances of the Asian Staff to the Government for amelioration. He was a Council Member several times and also served as its president. The Goan Academic Circle me at L da Cruz’s house. The idea was to foster music, plays and talks. Several founder members of the GG attended. L da Cruz was also instrumental in setting up the Goan Overseas Association with Dr A C L D’Souza and others; serving as its first treasurer, later secretary of the GOA. He helped put the faltering Goan School on sound footing. He was awarded the British Empire Medal for his service to the Treasury.

Made his career in the Secretariat and rose to the highest position available for which he was awarded the MBE. A keen tennis player and prominent in societal affairs. He ran a raffle in aid of the Goan School and was a prominent parishioner of St Francis Xavier Church.

A founder member of the Goan Gymkhana, Rego was a man of great integrity, full of good humour, very sociable and affable. Many will remember him for his loyalty, counsel and advice. He was always very supportive of initiatives by individual members in sports and cultural events. He worked in the Treasury in Nairobi before moving to Mombasa where he worked for over 33 years at the Government Coast Agency. His many sports trophies bear testimony to his many achievements in sports mainly Tennis, Badminton, Hockey and Cricket. In 1935 he represented East Africa in Hockey. He partnered Mrs Maria Dantas to  win the East African Championships in the early 1930s.

Gerald Paul Nazareth, CBE, GBS  was a senior judge in Hong Kong and Bermuda. Gerald Nazareth was born in Kenya on the 27th of January, 1932. He was educated at the Catholic Parochial School in Nairobi and St. Xavier’s College and Government Law College in Mumbai. Nazareth joined the Kenyan Public Service in 1954, as a prosecutor. He rose to the position of Senior Counsel. Nazareth was called to the English Bar at Lincoln’s Inn in 1962 and moved to the British Solomon Islands in 1963 to take up the appointment of Assistant Attorney-General. He subsequently became the Solicitor General and then Attorney-General to the British Western Pacific High Commission. Nazareth also became a member of the island's Legislative and Executive Councils and was Deputy Governor for a short time. In 1976, he was transferred to Hong Kong and joined the Hong Kong Legal Department as Assistant Principal Crown Counsel. In 1977, he was promoted to Principal Crown Counsel. Nazareth served as Law Officer between 1979 and 1985. He was appointed Queen's Counsel in 1981. He served as a judge in Hong Kong from 1985. He retired to London in 2000, however, he continued to be a nonpermanent Judge of the Court of Final Appeal in Hong Kong and Bermuda as he had been since 1997, until 2012.

[Gerald Nazareth passed away peacefully in on the 13th of August 2018, aged 86. He is survived by his wife Elba and daughters Melanie, Valerie and Deborah.]

Judicial career Gerald Nazareth was appointed a Judge of the High Court in Hong Kong in 1985. He became a Justice of Appeal on the Court of Appeal in 1991. Nazareth helped draft the Sino-British Joint Declaration and played a key part in arranging the swearing-in of judges within hours of the handover of Hong Kong in 1997. He was one of the non-permanent judges of the Court of Final Appeal in Hong Kong from 1997 to 2012.

For his dedicated and distinguished service to the Crown and the British Overseas Civil Service, Mr Justice Nazareth was presented with the OBE in 1975 and the CBE in 1985. In 2000, he received the Gold Bauhinia Star honour for serving the Hong Kong judiciary for more than 24 years in excellence.

Came to Nairobi in 1928 and spent his entire career in the Prison Service from which he retired in 1961. After that, he was a visiting Justice to penal institutions within Nairobi. In 1972 he published a “Historical Review of the Kenya Prison Service.” He took great interest in Goan affairs. He was a Treasurer of the GI Nairobi and President of the Goan Gymkhana 1961/62. He also held office in the Goan Overseas Association, the Kenya Goan Sports Association and the Dr Ribeiro Goan School, Nairobi. He was a keen tenis player.