(A work in progress) 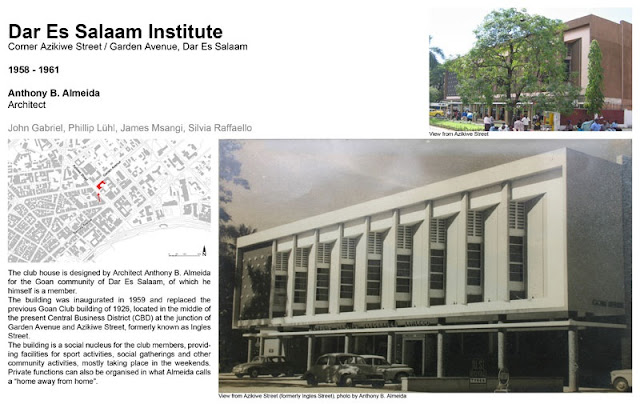 ANTHONY B. ALMEIDA, the internationally known architect, who passed away at the age of 98 in Dar es Salaam, Tanzania, was one of those rare Goans who chose to live and serve the African country of his birth. However, you could not take the Goan out of him completely. He was also close to Tanganyika’s (later Tanzania) first President, Julius Nyerere, himself one of the most outstanding leaders of an African country and one who stepped down from high office and into quiet retirement until his death. Tony, as he was known amongst his friends and family, designed Nyerere’s first home.

Tony was born in 1921 in Dar es Salaam to parents who had emigrated to Tanganyika from Goa. He was quite proud of the fact that he went to the J J School of Architecture in Mumbai (1941-1948). He often said that his architectural studies could be said to have been greatly enhanced by the fact that they took place in a land uniquely endowed with a rich heritage of ancient architecture. He was also impressed by the fact that the college also placed a great score on the study of this wonderful heritage.

Another element that also impressed was the group of foreign lecturers who taught at the college. The lecturers also enriched the library with publications and books on architecture from their home countries. Through this, Tony was able to keep abreast the modern trends in architecture from around the world. Through the library, Tony came to learn much about some of the giants of architecture of the time: Frank Lloyd Wright, Le Corbusier, Erich Mendelsohn, Alvar Santo and Oscar Niemeyer… Their influences instilled in Tony a principled search for modern solutions.

Tony worked for a little while in India and was soon elected an associate member of the Royal Institute of Architects of London.

He returned to Dar es Salaam in 1950 and quickly began designing commercial and residential buildings for the Asian community. His Indian influence was easy to spot, mainly by the soft/hard colours his creations were painted (colours that visible in abundance around India and especially during the festival of Holi). “The introduction of Art Deco in the trading quarters of the African cities is of predominantly Indian origin. It characterizes itself through pastel coloured concrete and plastered masonry façades applied too often quite straightforward and simple buildings. Most of these buildings have a combined commercial and residential use. In East Africa, these are called the duka, shops kept by the Indian trader, the dukawalla, who lives in the apartment above his shop. This typology and style remained popular throughout the 1930s to the late 1950s,” was how it was remembered in print many years later.

The first few years were a bit of a struggle but then the colonial government, in 1953, asked Tony to design various police stations/posts around the country. In 1954, the Goan community invited Tony to design a primary school (St Xavier's). While some colonial architects turn up their noses at the finished project, Tony would always remember it as the one that really made him Tanzania.

When independence came in 1961, Tony was in the right place at the right time. It was not long before, Tanzania was bereft of any white colonial or Asian architects and he was soon designing large office blocks, a library, hospital and lots and lots of new projects. One that is close to his heart is “new” home of the Goan Institute Dar es Salaam he designed for the Goan community. In its infancy, it was quite posh and revolutionary. Folks loved the place.

Amongst other architects that advocated an African ‘critical regionalism’ in their work and writings are Anthony Almeida (born in 1921) in Tanzania, Jean François Zevaco in Morocco, Norman Eaton in South Africa and Demas Nwoko in Nigeria. Engineering Modernity in African Architecture.

The introduction of Art Deco in the trading quarters of the African cities is of predominantly Indian origin. It characterizes itself through pastel coloured concrete and plastered masonry façades applied too often quite straightforward and simple buildings. Most of these buildings have a combined commercial and residential use. In East Africa, these are called the duka, shops kept by the Indian trader, the dukawalla, who lives in the apartment above his shop. This typology and style remained popular throughout the 1930s to the late 1950s.

VIVIAN A. D’SOUZA (In Goans_Tanzanite) Relatively short in stature and slight in build, but a Giant of a personality.   This was our late departed beloved Tony Almeida.  He was friendly but unassuming.  Of course, my memory goes back to the time I last saw him, over 50 years ago in Dar es Salaam.

Truly, he was an architectural genius.  Our Dar es Salaam Institute is one among many brilliant designs that came from his drawing boards. Our club was founded and known as the Goan Institute until the name was changed in 1963 to
Dar es Salaam Institute, in keeping with the times  Tony's concept of the building, was like a giant "G" . when seen from a bird's eye view.  The G enveloped the “Ï" which was the open air sunken dance floor…

The land for our DI was acquired after the First World War, from the Custodian of Enemy Property, and our intrepid ancestors were able to acquire the great piece of property which was strategically located and convenient to the Goans who at the time all lived in town.  The original Goan Institute was like a giant red roof tiled bungalow, with the Hall being the centrepiece of the building, with a large playground on the side where we played football and hockey etc.   With a burgeoning membership, the club became too small to serve the membership, and a new building was planned.  And who else to design the building then our very own member and illustrious architect Tony Almeida.

Tony faced many design challenges.  To help fund our new building, half of the playing field was sold to an Oil company to establish a Petrol station.  Part of the building (below the Hall)  gave way to commercial space,  which provided a stream of revenue to pay the building loan.  So Tony was, left with constricted space, to construct a facility that would meet the need of our Goans.   And the result is evident for all to see.  It is a lasting legacy to this great Architect.

As long as the building stands, it will be a lasting memorial to him.  I do not recall a plaque within the DI  acknowledging who the Architect was.  Tony probably in his unassuming manner would have objected.   But now that he is no longer with us, I think, a plaque placed in a strategic location within the building should be installed in lasting memory of this great guy.
And the appropriate time to unveil the plaque would be at the Centennial celebrations in December.

Vivian A. D'Souza (Hon. General Secretary - 1961-1963)
ALBERTINA DOURADO (Goan_Tanzanite): I knew Toni Almeida personally (yes he spelled his name with an i) as he is the father of my classmate and friend Alison.  In fact I know the whole family as I went to their place frequently when I lived in Dar.  When Alison was studying in England they would pick me up and take me to the airport to meet her when she came back for summer holidays.  I also exchanged Christmas cards with Toni after I moved to Canada. I kept in touch my friend Alison over all these years and she told me about his passing. He was cremated today (March 20th) at 10 a.m. and Mass was held at St. Peter's at 4 p.m. local time.  I had two long conversations with him when I was in Dar in 2015. He also designed his house in Oyster Bay where he continued to live till his death.  He was an amazing man and still had a sharp recollection of everything.

The ARCHIAFRIKA Foundation can be contacted at PO Box 14174, 3508 SG, Utrecht, The Netherlands  Email: info@archiafrika.org