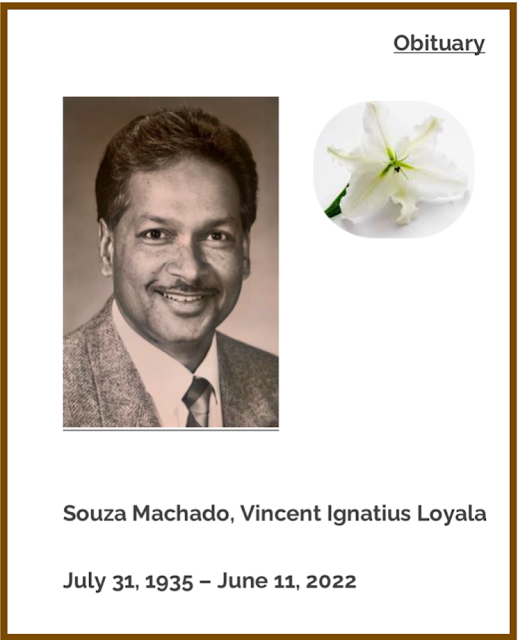 It is with profound sadness that the family of Vincent Souza Machado,

announce his peaceful passing, at home with his loving family, on June 11,

be lovingly remembered by his wife of 58 years, Helena (Nee. Godinho); his

Vincent is survived by his 6 siblings, Evelyn, Anthony, Margaret, Michael,

Elizabeth and David, living in Australia.

Vince was born in Zanzibar, Tanzania on July 31, 1935. After he finished his schooling, he moved with his family to Dar-es-Salaam. He then went to Reading University, England where he completed a BSc in Agriculture. He went on to complete a year at Cambridge University, followed by post-graduate work in Trinidad. He was assigned an ex-patriot position as an

Agricultural Field Officer in The Gambia. He then returned home to Tanzania where he worked as a researcher. Vince later moved to Uganda, where he worked at the Kawanda Research Station, and met Helena.

During the exodus of Uganda, the family moved to Guelph, Canada. He attained his PhD in Plant Science at the University of Guelph and worked as a much-loved professor, in both fields of teaching and research for 23 years.

During this time, he also accompanied undergrad students to Kenya on a ‘Semester on Safari’. Vince enjoyed his retirement planting in Yuri’s farm garden and sharing his love for horticulture with his grandchildren (there was always an ice-cold beer waiting in the fridge).

Memorial Donations may be made in Vincent Souza-Machad0’s name to Parkinson’s Canada, 316-411 Yonge St, Toronto, On, M2P 2A9