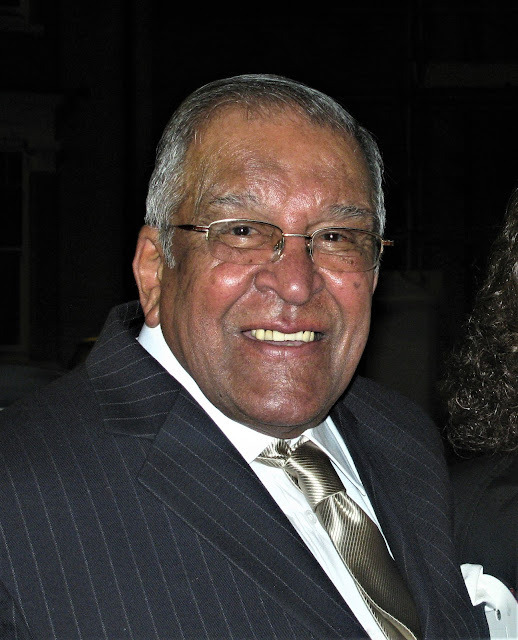 Delivered on behalf of the family by Subash Tavares

Dad/Claude was born in Nairobi, Kenya on 2 March 1929 to Peter and Alice (aka Rosslynn) Almeida

He was the second of 4 sons – Alex, Claude, Billy and Donald.

Donald, the baby of the family is with us today.  The bonding between the brothers was very strong throughout their lives.

When Claude was 10 years old, he and his brothers were sent to the Catholic boarding school in India.  When WW2 broke the brothers tried to enlist in the army in India.  Of course, they were underage, and fortunately, the school Padre found out and shipped them straight back to Nairobi, where they finished their schooling at Dr Ribeiro Goan School.  Dad recalled the excitement of their ship being followed by a German U-boat en route to Kenya.   That was the end of their short-lived war!

Claude’s father Peter owned a motorcycle in the 1920s.  Naturally, that led to the Almeida boys loving motorcycles and they all had a great love for adventure. Claude bought his first motorbike, an ex-US Army Harley Davidson from money earned from his first job and in February 1949, Claude, aged 20, Alex and 2 friends (Richard and Sanu Desai) decided to embark on a grand tour of East and Central Africa on their motorbikes.  As far as they knew, no one had ever attempted that before.  They prepared well for the long 3,500-mile journey ahead on rough terrain, dirt tracks and rickety wooden bridges.

On that trip, Claude and Alex climbed Mt Kilimanjaro in 2 days with their local tour guides.

When they returned to Nairobi, they were nicknamed the “Cowboys on motorbikes”.

This was the first of many trips and adventures with his brothers and friends.  Claude loved the outdoor life, big game, fishing, and camping in the game parks.

One of Claude’s first jobs was at Lowis Hodgkiss in Nairobi, agents for Austin, Jaguar and Triumph and in 1949 they sent him to England on a work-related trip.

In 1955 Claude, Mel Pimenta and 3 friends embarked on a 'momentous journey in a Ford Model T, driving from Nairobi, through Uganda, Egypt to Alexandra, sailed to Italy and toured Europe going as far as Sweden, Norway, and the UK.  Their trip even made headline news in Norway!

Claude recounted that for the first time ever because of that trip, he was late for work – by three months!  But his company didn’t mind as Claude was hardworking, talented, efficient, and organised with his work.

Alice, Claude’s mum was a true inspiration to her sons, and she must have worried about her boys when they sped off on spontaneous trips on dirt roads to Mombasa for midnight/early morning swims.  There were no mobiles in those days to call home!  They would just send messages through friends as to where they were going. ‘….tell Mum we are just going to Mombasa.  Will back tomorrow.’

Claude was a keen rally driver and took part in the 1958 Coronation and Mt Elgon rallies.  He test drove the BMC mini and Austin cars to near destruction on the hazardous East African rallies.  Claude and his teammate (M Parker) never won because they often stopped to help other drivers in trouble.  This earned the most helpful team award instead.

Claude and his brothers were fun-loving boys but remained true gentlemen and were very popular members of the Goan community in Nairobi, always ready to help anyone.  The ladies adored them.  But Matty won Claude’s heart!

Having had many adventures, it was time to settle down. Claude and Matty got married in June 59 in Nairobi and his job took him to Mombasa and then Dar-es-Salaam, where they settled and had 9 children.

Claude faced many difficult moments in the 1960s, losing his father, Peter suddenly aged 60 and then his beloved brother Billy in a motorbike accident in 1962.

Claude and Matty were people of great courage and made a difficult decision to leave everything behind to start a new life in England in April 1973.

They initially stayed with his brother Donald and wife Alvira in Maidstone before settling in Broadstairs.

Claude and Matty found work immediately.  Sadly, Claude faced another tough period when Matty died suddenly 8 months later in December 1973.  Jonathan, the youngest had just turned one and Benita, the oldest had just become a teenager.

Claude made sure he kept all the children together and wouldn’t let them be parted.  He worked hard to provide for them.  There were many wonderful people who helped the family during those dark difficult days, relatives, friends, neighbours, school and members of the Broadstairs Parish.  Some of those people are with us in the service today, whilst others have sadly passed away.

Claude made friends easily, was good natured, charming and always had a smile on his face.  He married Pam who adored him and they worked hard to provide for and bring up the young family.  Sadly, Pam passed away 15 years ago.

Claude was a motor parts manager, working for Martin Walters, Invicta Motors and the Grand Garage in Cliftonville up until his retirement.  He was exceptionally good at his job, and had an excellent reputation and won many awards including a trip on the Orient Express from London to Switzerland.  Many of his colleagues and friends are here today.

He enjoyed socialising and parties.  The children recall the many parties in Dar to celebrate one birthday or another, followed by singalongs and dancing. This continued throughout his life in England.  His dancing stamina was amazing! He could rock and roll and jive with the best.  He and Pam were often the first on the dance floor and the last ones standing when all the youngsters had gone to bed.  He was usually the last home even in his late 80s!

Claude had an affinity with people of all ages, young and old and treated everyone with respect.  He was well known for his warmth and generosity and made everyone feel welcome.  In fact, many who visited for just one drink ended leaving having had just one too many!

Claude loved and played many sports including cricket and badminton, bat and trap for his work team, and he and Pam played for a darts team and enjoyed walking the boxer dogs.

Dad was an adventurer and a daredevil, a family gene that has been passed on to his children and grandchildren.

He loved nothing more than travelling, seeing new places and revisiting places he’d been to when he was younger and was ‘always up’ for trying anything new.

In fact, only a few years ago, Dad got very cross with Benita & Iain because they wouldn’t take him to China with them, not because they didn’t want to, but because it was rather difficult, no make that impossible, to get insurance for an 85-year-old, daredevil!

Dad loved nothing better than going on safari, sitting in the front with the driver, practicing his Swahili and recounting his life. Dad was a party animal, who could party long into the night. In fact, in Margarita, the bartender just left the drinks on the table, for the group to help themselves and went to bed!!  Another time, Dad & Pam were put into a hotel in a quieter part of the holiday resort, but Dad was rather upset because he wanted to be in the 18-30's hotel.

However, it would take far too long to tell you all about Dad's holidays and adventures in his twilight years, but a few of these were: China and Hong Kong for Billy's Wedding, Rome, Isandwana and Rorkes Drift for the Zulu War and battlefields tours, Kenya, Tanzania, Cuba, Margarita, Seychelles, Mauritius, Egypt, Poland, Turkey, Indian Ocean cruise, Swaziland, and South Africa.

Dad went micro-lighting in Venezuela, hot air ballooning over the Nile in Egypt, snorkelling in the waters off Wasini Island in Kenya, parasailing and a submarine expedition in Mauritius.

Carry on with your adventures on the other side Dad, catch up with your relatives and party on long into the night, for this is not a sad day, but a celebration of a life, well lived!

Claude’s passing was peaceful, and he even had a smile on his face.

After his passing, the overwhelming messages of sympathy and support received by the family said Claude was a real gentleman, dignified, always smiling.  He always had a kind word to say and was a generous man who would help anyone.

Claude will be dearly missed.  We are blessed with many happy memories and time we spent together.

Speak of me as you have always done.
Remember the good times, laughter, and fun.
Share the happy memories we've made.
Do not let them wither or fade.
I'll be with you in the summer's sun
And when the winter's chill has come.
I'll be the voice that whispers in the breeze.
I'm peaceful now, put your mind at ease.
I've rested my eyes and gone to sleep,
But memories we've shared are yours to keep.
Sometimes our final days may be a test,
But remember me when I was at my best.
Although things may not be the same,
Don't be afraid to use my name.
Let your sorrow last for just a while.
Comfort each other and try to smile.
I've lived a life filled with joy and fun.
Live on now, make me proud of what you'll become.
Source: https://www.familyfriendpoems.com/poem/remember-me-12
My niece in London has just sent us the sad news of Claude's passing. My wife knew all the Almeida brothers because they were good friends of her brothers Bruno and Bernie but more especially because they treated her as their own little sister and, at dances at the Goan Gymkhana, they always made her feel that she was the most popular belle of the ball. I completed my High School Certificate at Dr Ribeiro Goan School in 1952. I remember Donald as being about my age but Alex, Claude and Billy were already legendary characters by the time I came into high school and their exploits were spoken in hushed whispers by all of us lesser fry. I think that the adventurous Almeida brothers were an inspiration to many of us more conventional kids who kept to the straight and narrow while at school. But after high school, many of the things I did were probably influenced by their example. And certainly, the girl I married would have met with their approval!
Subash's eulogy brought out the "larger than life" nature of the Almeida brothers and revived many of my own memories of them. His conclusion was exactly what my own recollections of them were. Claude lived life on his own terms and made many of us wish that we had the guts to do likewise. Given their lives to rewrite all over again, I don't think the Almeida would change a thing except for Billy's tragic and untimely death. Claude's children can certainly be proud of their dad. He had a heart of gold, loved people and was loved in return full-heartedly. As Subash said, Claude's life is one to be celebrated, not mourned.
Cybele and I condole with all his family and extended family, like you, who will miss him dearly. But he will live on in there, your and our memories. May he rest in peace!
With love and sympathy
Francis
- June 14, 2022