Things you did not know about Mombasa 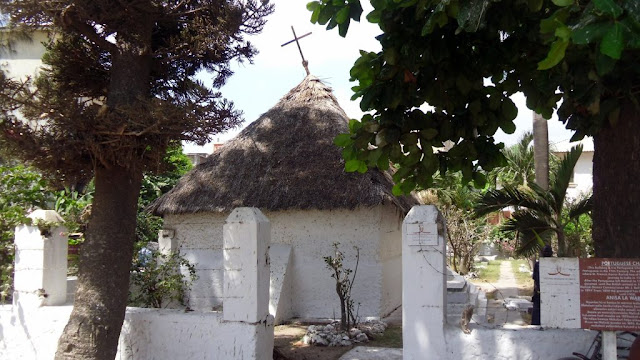 (An excerpt from Edward Corcoran's Mombasa Mission 1888-1990 Part One)

Let’s start at the very beginning - a very good place to start". So, Maria tells the Von Trapp children in the musical The Sound of Music. Why not let us do the same? And for our history of the faith in modern Kenya, with special reference to the Diocese of Mombasa which corresponds to the civic region of the Coast Province, we find the beginning in the second verse of Genesis. There we read: "...God's spirit hovered over the waters". And, of course, part of that vast expanse of water was what we know today as the Indian Ocean, the only passageway from the outside world, until comparatively recent times, to that strip of Coastal East Africa we call the Kenya Coast. God's Spirit hovered over this stretch of ocean for centuries, watching the comings and goings of the earliest seafarers through it. Among these were possibly Assyrians as early as 3000 BC; Jews and Phoenicians around 2000 BC; Azanian settlers from the southern end of the Red Sea. It is interesting to note in passing that Mama Ngina Drive along the seafront in Mombasa was originally called Azania Drive.

Every Kenyan school student learns that the first written account of trade along the East Coast of Africa was the Periplus of the Erythraean Sea, dating from the latter half of the first century AD. Mombasa is not mentioned by name, but very likely it offered a haven to these early travellers even if it had not yet become a trading centre worthy of mention. The inhabitants of this part of the Coast at this time were probably African tribes, not of Bantu origin, among whom had settled people of the Arabian Peninsula, principally from Yemen and the South Arabian Coast.

THE ARRIVAL OF ISLAM

God's Spirit, still hovering over these waters, had not yet directed seafarers who believed in the One True God as far as Mombasa. It would seem that the first knowledge of the the God of Abraham was brought to these shores by Muslim traders in the ninth and tenth centuries AD, a period which saw a great upsurge in trade with Persia and Oman. Mombasa is mentioned in an account of a visit to these parts by Ibn Batuta about 1330 and is described as a large city abounding with banana, lemon and citron; the chief food was fish and bananas; the inhabitants were Shafite Sunnis who were "religious, chaste and virtuous". The town's mosques were solidly built of wood. Islamic culture at the Coast reached its height from 1200 to 1500, during which period Mombasa became, after Kilwa further South, the second most important town in East African coastal waters.

The first sight of the emblem of Christianity in these parts was that of the huge cross emblazoned on the mainsail of the flagship of Bartholomeo Diaz who rounded what he called the Cape of Storms with a small Portuguese fleet in 1487. The King of Portugal, who had not had to experience such storms, rechristened it the Cape of Good Hope. Diaz is not mentioned in connection with Mombasa - the more famous Vasco da Gama appears to have been the first Portuguese to call there. This was in April, 1498.

After an apparently friendly welcome accorded them, the Portuguese learned of an Arab plot to seize their fleet in retribution for Portuguese action against their brothers earlier on at Mozambique. This friction was the beginning of the hatred that existed thereafter between the Arabs and the Portuguese right up to 1729 which saw the end of the latter's influence in East Africa. Vasco da Gama continued on his journey and made a brief stay at Malindi. He was well received there, and on his return trip from Goa, was allowed to erect a large cross on the seashore. This cross, bearing the coat of arms of the King of Portugal, is still standing today, although not on the original site. Vasco da Gama made a second trip to Goa in 1502, and on this occasion stayed some time at Kilwa. As he made ready to sail, he discovered some two hundred Muslim women who had been smuggled on board the ships by his sailors, declaring that they wished to leave their husbands and embrace Christianity instead.

Da Gama would have none of it, finding the women "of slender virtue" and finding his crew's motives suspicious to say the least of it. When he started repatriating the would-be converts, he found himself landed with some forty whose husbands refused to take them back. And so these ladies of Kilwa were accepted by the Portuguese and kept on board becoming, doubtlessly, the first known "converts" to Christianity in East Africa. Coming back to our home waters, we find the Portuguese making their first permanent settlement - or factory, as such settlements were called - at Malindi, and not Mombasa, in 1505. At this, Kilwa's power began to wane, and until the building of Fort Jesus in Mombasa in 1593, Malindi was the only important settlement of the Portuguese north of Mozambique. That is why we find the name of our next Portuguese in this journey of faith, St. Francis Xavier, associated with Malindi, and not with Mombasa.

St. Francis Xavier sailed up along the East African Coast on his way to Goa in 1542, and, in a letter to his Jesuit superiors in Rome, he describes his stopover there in April of that year. "We visited a city inhabited by Moors (i.e. Arabs) who are at peace with us", he writes. "We learn that Portuguese merchants were usually found there, and that the Christians who died there were interred 'in tombs of great size with crosses on them' " . He mentions the Vasco da Gama cross as "gilded and very beautiful". It is with great pride that he writes: "The Lord God knows what comfort it gave us to see it, conscious as we are how great is the virtue of the cross, standing thus solitary and victorious in a Moorish land".

St Francis buried a sailor who had died on board and said that the Muslims were greatly edified with "...the way we Christians have of burying the dead". Before continuing his journey, he had lengthy discussions with some of the leading members of the Muslim community, at the end of which he tells us that ". . .their point of view remained unchanged. . . and so did mine". Mosque attendance was a worry for one of their religious leaders. He told Francis that the faithful were attending only three out of seventeen mosques in the town, and to those only a handful went regularly. He wanted to know if Christians had the same problem.

From Malindi, Francis headed north again and describes a visit to the island of Socotra (to which we shall return later on), and then ends his letter suddenly with the words "we reached the city of Goa on 6th May, 1542 (over a year since they had sailed from Lisbon). Francis was only thirty-six years old and had but another ten years to live. This great pioneer missionary went to the East Indies and Japan, signed his letter with the utmost humility: "Your useless brother in Christ". "Useless" as he may have been in his own estimation, he remains today patron of missionaries; and on a more modest scale his feast is celebrated with special devotion in Kenya by his spiritual children, the Goan Catholic community.