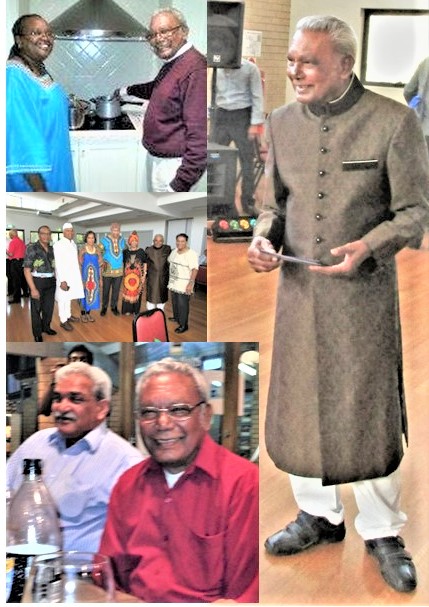 THE next time the Friday Club meets in Sydney, there will be a glass empty, permanently, in memory of Andrew Scott who passed away on May 30, 2022. I first met Andrew in Nairobi, Kenya, during the early 1950s. Andrew had given one my best friends at the time a job at Gestetner when Andrew was a kingpin, especially in the servicing area. I am convinced, that even with the demands of ageing, he really did not change very much. He remained true to himself.

He was above everything a perfectionist: he dressed impeccably, his hair shone with Brylcream and did not have a hair out of place, and the skin on his face shone too, thanks to Ponds vanishing cream (he felt out of sorts when it was not available in Australia) and I think Old spice added a kind of spice to his persona. Naturally, his clothes were always fresh, impeccably pressed and crisp. More often than not, he wore a suit and tie to any party or function he attended. He was impeccable. He was stylish.

For many years loved his Resches Dinner Ale long necks. Broke his heart when the brewery discontinued them.

He also loved singing and playing his guitar. Even in his 70s he would pick up the microphone and belt some old favourites at parties and dances.

He was meticulous in everything he cooked. Naturally, it was quite brilliant. The onions in a chicken curry had to be fried on a slow fire, stirred occasionally until soft, then and only then the tomatoes were added to the dish with the ginger and garlic and a little later the spices. He was fussy to say the least but the ultimate rewards in taste were quite brilliant.

I would like to think the attention to detail and the need for perfection was born after he mastered the art of calligraphy in writing, mainly italics and his friends pestered him every time they needed invitations to a party or a function. He fussed quite a bit but we knew he enjoyed it too. After all, he was quite brilliant at it too.

Above all, he was a master printer. With his brother, Leslie, they had a printing outfit at home for a long while. He was the man in charge of the print shop at a North Shore council. Everybody loved him there and when he retired there were quite a lot of tears.

His love of printing began in Nairobi where he was in charge of the Gestetner duplicating machine outfit. When he and his family had to leave Kenya, Gestetner brought to their branch in Sydney. He was always a top hand.

He was broken-hearted naturally after his wife Claudia passed away a few years ago. He visited her grave and put fresh flowers there once or twice a week and sometimes more. He befriended many of the families who visited the cemetery. Ironically, he had a fall at the cemetery and lay there for quite a while before help came and rescued him.

Virtually everything he did, he did it his way (as the song goes). He was recovering in hospital from another fall and complications thereof. He did not want to spend any time in a rehab centre, old folks’ home or anything like that. He got his wish.

During the twilight of his life, when walking any great distance was too much of a health risk, he sit in the shopping malls and watch the world go by.

He and Claudia were blessed with three children: Michael, Jeannie and Neil. He had two brothers Bernard (Enem) and Leslie (Rineth) and two sisters Maria the eldest and the younger sister Patricia. The three of them and their extended families were pretty close to them. There are many other families that Andrew spent time with, especially at Christmas and other public holidays when they all got together for a bring-a-dish lunch. He belonged to several groups of friends. Our condolences to all of them.

Each of us who were his friends suffered his loss but we are thankful the Good Lord granted him his wish and ended his pain and suffering.  He knew none of us would ever forget him in prayer and every time a glass is raised anywhere, any time or we yearn for one of his curries, samosas or this and that.

With All our prayers from the Friday Club and all our friends who knew and loved you Andrew: Tony Reg and Rebecca, Loy, Terry and Gitta, Caj and Bernie, Drake and Joanne, Felix and Hazel, Skip ... tears rolling down broken hearts but smiles when we think of the times, the laughs and this and that we had together.