I am attempting to write an early history of Kisumu, mainly about its communities, sports and entertainment. I am hoping to do this with a little help from my Kisumu friends who are now all over the diaspora.

WOULD LOVE TO READ YOUR MEMORIES! 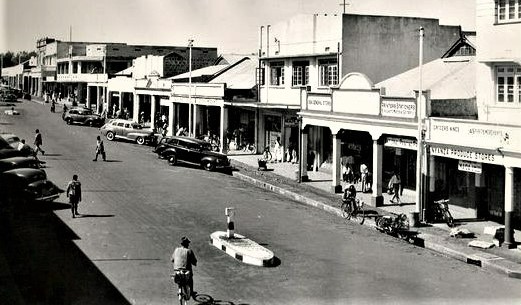 Kisumu was located on a rocky ridge covered with thorn bush before it was cleared and roads were cut,” so wrote Charles Hobley a colonial administrator in 1900. On 20 December 1901, Florence Preston the wife of the engineer drove the last nail in the last sleeper by the shores of Lake Victoria and Port Florence came into being. However, it was only called Port Florence for a year, and then it reverted to its original Luo name – Kisumu, meaning a place to look for food. The English statesman Winston Churchill visited Kisumu in 1907.

Kisumu was identified by the British explorers in early 1898 as an alternative railway terminus and port for the Uganda railway, then under construction. It was to replace Port Victoria, then an important centre on the caravan trade route, near the delta of River Nzoia.

Kisumu was ideally located on the shores of Lake Victoria at the cusp of the Winam Gulf, at the end of the caravan trail from Pemba, Mombasa, Malindi and had the potential for connection to the whole of the Lake region by steamers. In July 1899, the first skeleton plan for Kisumu was prepared. This included landing places and wharves along the northern lakeshore, near the present-day Airport Road. Demarcations for Government buildings and retail shops were also included in the plan.

Another plan was later prepared in May 1900, when plots were allocated to a few European firms as well as to Indian traders who had travelled to Kisumu on contracts to build the Uganda Railway and had decided to settle at the expanding terminus.

The plan included a flying boat jetty (now used by the Fisheries Department). In October 1900, the 62-ton ship Sir William Mackinnon, 1st Baronet, built and registered in Kisumu, made its maiden voyage to Entebbe, marking the beginning of the Lake Marine Services. The Winfred and the Sybil were later added to the fleet in 1902 and 1904, respectively.

On Friday, December 20, 1901, the railway line reached the Kisumu pier, with the centre adopting a new name, Port Florence.

By February, the railway line had been opened for goods and passenger transportation. Kisumu was also privileged to host the first flight in East and Central Africa; the current police workshop was the first hangar in Kenya and entire East Africa. Before the jet airline era, the city was a landing point on the British flying boat passenger and mail route from Southampton to Cape Town. Kisumu also linked Port Bell to Nairobi.

In the meantime, it was realized that the site originally chosen for the township north of the Nyanza Gulf was unsuitable for the town’s expansion, due to its flat topography and poor soils. An alternative site was therefore identified, and the town’s location moved to the ridge on the southern shore of the Gulf, where the town sits today. Consequently, another plan was prepared in 1902, which provided the basic layout of the new town on the southern ridge. This was followed by the construction of a number of Government buildings, notably the former Provincial Commissioner’s Office (now State Lodge) and the Old Prison (now earmarked for the construction of an Anglican Cathedral).

In 1903, the township boundaries were gazetted and some 12,000 acres, including water, set aside for its development. The new township reverted to its original name, Kisumu, in substitution of Port Florence. At this time, there was an ‘Old Kisumu’, that consisted of two rows of stalls (dukas) on Mumias Road, north of the Gulf. It was later demolished in the 1920s when new plots became available on Odera and Ogada Streets in the present-day Kisumu, hence the new area acquired the name ‘New Bazaar’.

By the 1930s and ’40s, the city had become a leading East African centre for Commerce, Administrative and Military installations. In the 1960s the population of Asians in relation to Locals was significantly higher. The town was elevated to the status of a Municipal Board in 1940 and later to a Municipal Council in 1960. In the early 1960s, very little development took place in Kisumu, with an acute shortage realized in dwelling houses, shops and offices. The situation was later made worse by the influx of locals into the town following the declaration of independence in 1963.

The city’s growth and prosperity slowed down temporarily in 1977, as a result of the collapse of the East African Community (the development organisation that held Uganda, Tanzania and Kenya together, sharing various facilities under one organisation) . However, the city was spurred by the reformation of the community in 1996 and with its designation as a “city.” The port has been stimulated by the transformation of international business and trade, as well as the shipments of goods destined for Uganda, Tanzania, Burundi, Rwanda and the Democratic Republic of Congo.

Today, Kisumu is one of the fastest-growing cities in Kenya. It is thriving with rich sugar and rice irrigation industries, whose contribution to the National economy is immense due to its natural resources and as the epicentre for business in East Africa. (Source: Kisumu City Council)