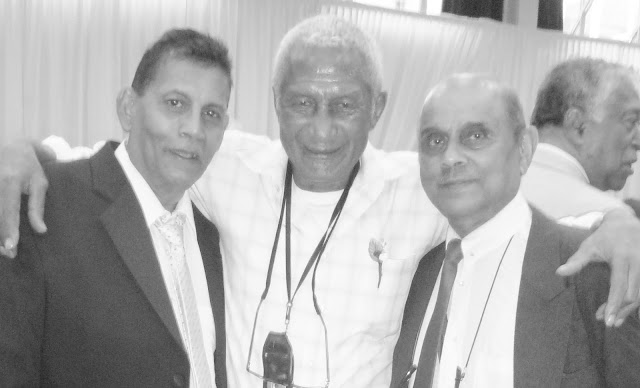 The late Dickie and Jim Burke had nine sisters. Their mother was Seychellois and their father a Trinidadian. Dickie was born in Mombasa. He became a sailor and it is no exaggeration to suggest that he might have had a girl in every port. Dickie’s funeral was celebrated in London 3.30 UK time on May 30. It was a quiet, dignified farewell. Messages were read from his daughter, Christina, Peggy, and his two cousins: Nina Logisse and Doris Gunpatrav: One of the sisters, Nina or Doris read a beautiful poem chosen by Kelly and Peggy was Dick’s long time partner (40+ years).

I SPENT most of my early life among the Seychellois and Mauritians in Nairobi, Kenya. In fact, most of the families adopted me as one of their own. I learned Creole and sat and listened to the old men as they stirred the pot making a drink called bakka (not the correct spelling). Of all the guys I met in the communities, there were a few that always stood out: the Bedier boys, Michael, Eddie and Cedric, Brian and Harold Maker, the Bresson boys, the Laval boys, big Louis Vel, even bigger Jim Burke, Brian Fernandez and a host of others. Perhaps the most unforgettable guy was Dickie Burke, the coolest guy with smiling eyes, a face that charmed every girl he came across and he was everybody’s devoted friend. Dickie is now with many of his old friends in heaven.

Dickie was also a ladies’ man, a brilliant dancer, jive, the twist and of course, cheek-to-cheek. He was just a very happy guy not matter what the problem, those eyes sparkled and his cheeks said “Hi!”

Kenya’s international football star Alex Fernandes told me how he met up with Dickie again in London. Dickie approached Marjorie at Kings Hospital in London. Dickie was there dealing with cancer. Marjorie being pretty good looking caught his eye and they caught talking and Dickie asked if she knew a chap called Alex Fernandes from Nairobi. “He is my brother,” she told him, and his eyes lit up like Christmas lights and it was not very long before the two friends met up. Alex would make sure Dickie came to every Goan function they went to in London. Dickie was crazy about the Goan dish called Sorpatel (a pork curry) and, of course, prawn curry. In any case, Dickie had known so many of the Goan sportsmen and women in Nairobi, that we all thought he was half-Goan anyway.

Dickie may not always have had money bulging in his pockets (the opposite may have been true) but he would have given the shirt of his back to a friend.

He was one of those truly great soccer players never to have played for Kenya. He played for the Seychelles United, the glamour team started, I think, by the Laval boys, Roving Rovers, International Harvester and the premier Nairobi Heroes with whom he toured Mozambique, Tanzania and one or two other places. He was a goalkeeper, but he also played in the backline and anywhere else he was needed. He was very stylish. Tall, lithe and nimble, he would fly off to the left or to the right like a mini rocket.

Talking about meeting with the Goans, Alex mentioned to Dickie that Dr Ribeiro Goan School ex-students were planning an annual reunion in Toronto, Canada. Guess what? There he was in the hall in Toronto beaming from ear to ear … Alex and his wife Dahlia were stunned but they loved every moment with Dickie.

In fact, Alex was planning to catch up Dickie because there was a function coming up soon. Sadly, he never got the chance.

I met him on two occasions in London, both were the St Teresa’s schools’ reunions in London. On each occasion, we yarned, laughed, and drank, a long time after it was time to go. Now we are left with only the memories, unforgettable memories of a wonderful guy. He had his flaws, but then again, who doesn’t.

Enjoy the music up there.