More about Goa and Goans! 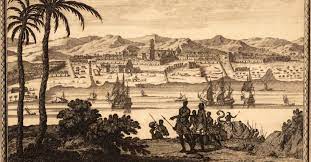 Like many places around the world where Goans gather around a bottle of this and that or at lunch or dinner, or even at a card table, the conversation more often than not turns to Goa, Goans, Portuguese, the origin of the Goan Catholic ... the Friday Night Club in Sydney is no different. Blessed with as many points of view as there are in a variety of curries, agreement, acceptance and more often than not the subjects under examination remain floating in the air until the next Friday we meet. Then having burnt many midnight oils surfing through the wisdom (or the lack thereof) of pedia this and that, this ghosts of conversations past are brought to life for another round of robust calculation, miscalculation, examination and this and that.

This offering is to the altar of misinformation and disinformation as preached by our resident Dr Google. It is by no means the answer to the question ... How did Goa get its name!

This piece is based on a virtual conversation on a site called Quora:

What is the origin of the State name "Goa" in India?

The origin of the name Goa is unclear. In ancient literature, Goa was known by many names such as Gomanta, Gomanchala, Gopakapattam, Gopakapuri, Govapuri, Govem, and Gomantak. The Indian epic Mahabharata refers to the area now known as Goa, s Goparashtra or Govarashtra which means a nation of owwherds. Gopakapuri or Gopakapattanam were used in some ancient Sanskrit texts, and these names were also mentioned in other sacred Hindu texts such as the Harivansa and the Skanda Purana. In the latter, Goa is also known as Gomanchala. Parashurambhoomi is a name that the region is referred to in certain inscriptions and texts such as the Puranas. In the third century BCE, Goa was known as Aparantha, and is mentioned by the Greek geographer Ptolemy. The Greeks referred to Goa as Nelkinda in the 13th century. Some other historical names for Goa are Sindapur, Sandabur, and Mahassapatam.

De Sousa, Fernandes and Rodrigues were (and still are) very common family names in Portugal at that time. So it is not surprising to find them so often in use. Noronha, Mascarenhas and Menezes which are very noble surnames in Portugal are also found even if the Goan family who uses it has no clear aristocratic roots.

Due to the proximity of the British Raj and also due to the fact that a lot of Goans used to work for the British in Mumbai and Karachi from the early 19th century on, some Portuguese surnames often suffered alterations in order to be more easily pronounced by the Brits: De Sousa and Da Silva became D’Sousa and D’Silva, Rodrigues became Rodricks, etc.

These phenomena are not limited to Goa and it’s common to find these family surnames in Kerala (mostly amongst the Roman Catholic communities of Kochi/Cochim) as well as amongst the East-Indian communities of Mumbai which ancestors were either Goans or Portuguese Catholic inhabitants of Bombay before this settlement was offered as a dowery by the King of Portugal to his English counterpart on early 17th century.

In Sri Lanka, which has been colonized by the Portuguese from the first years of the 1500s and where they kept their domination in big parts of the island till 1658, we can observe the same abundance of Portuguese family surnames which variety is even more limited than in Goa. The process was the same as the locals used to adopt their godfathers’ surnames. What is curious is that, nowadays, a lot of Buddhists also have Portuguese surnames. It can be explained by the fact that big numbers of the locals who were converted to Catholicism on the 16th century retained part of their Buddhist faith as the presence of Portuguese missionaries as well as the creation of a local clergy were very limited. Later on, after the end of the Portuguese rule, Ceylon (Sri Lanka) experienced a regeneration of the Buddhist religion and the Catholic faith disappeared in many regions. But the former Sinhala surnames of these families were lost for so many decades that they kept using the Portuguese surnames till today (with some alterations: Sousa often becomes Souza or Soyza, Peres becomes Peiris or Piris, Fonseca becomes Fonseka, etc.)

Vinay Borker: Almost all Goan Catholics are of Hindu origin. When Hindus were baptized into Christianity, they got the surname of the priest, usually a Portuguese, who baptized them. Thus, if an entire village was converted by a single priest then all got the same surname of the priest. Sometimes a European person, usually a Portuguese, was made the godfather of the converted persons. The converted got the surname of the godfather. So, the majority of converted Catholics got a Portuguese surname. Interestingly many records of conversions are still maintained in the churches in the locality. So, a Catholic can usually find out from the records what was his/her original Hindu surname.

Do people from Goa like being Portuguese or Indian?

Mark Quadros: Being born and brought up in Goa itself, I think I qualify to voice my opinion on this.

One Avo (Grandma) was Portuguese (born and brought up in Portugal) the other was from Goa, Both ended up marrying Goans so I think our family grew to be less orthodox and more liberal. It was interesting as a child to see that there were hardly any differences in both. I feel the older generation in Goa i.e. my grandparent’s generation were more into the Portuguese lifestyle than the descendants (us)

I can write Portuguese pretty well and have studied it for my boards as well but I think I like to associate myself as a mixture of both Goan and Portuguese and a bit of Indian. (To start with everyone was an Indian Hindu).

We have a more westernized culture, our parents are open to us dating, travelling, taking breaks in our education, it’s very liberal. We have no arranged marriage system or a ‘dowry’ system. Well, some pure caste Goans may have this.

So yes, I feel it is totally normal to not be associated as Indian as our culture is very different from that of an Indian family.