Menegai is firing up agan 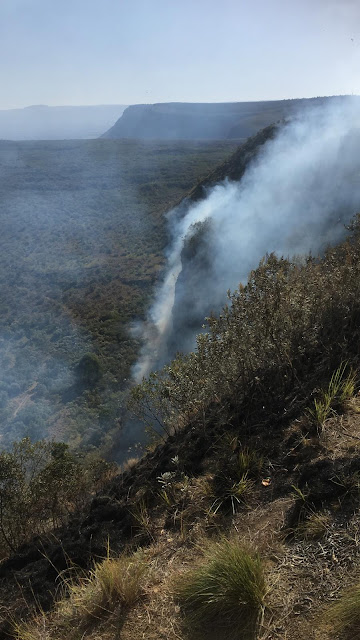 One of my former Menengai High School students, Narendra Khagram, sent me the attached photo of Menengai Crater with the message that Menengai, long considered a dormant volcano, is showing signs of activity. The accompanying photograph shows either smoke or steam - it's difficult to tell which with any certainty.  The activity shown in the photograph is almost insignificant compared with, for example, the eruption that took place in La Palma in the Canary Islands and lasted 85 days until December 14, 2021. Although Menengai crater is considered dormant, in view of the increased activity, it is prudent of the authorities to have alerted residents of Nakuru to the possibility of danger especially as fault lines run near the city and cracks have occurred recently showing signs of dangerous activity below.

I taught in Nakuru from 1961 to 1970 at Menengai High School. Cybele and I had a lovely house on the last road on the way up the crater which is the second-largest volcanic caldera in Africa after Ngorongoro. Around the mid-sixties, a tremor shook Nakuru at night. Cybele and I slept through it. The next day, when we heard the news on the radio, we checked around our house and the only evidence of a tremor that we noticed was that some pictures on the wall were askew. No big deal, I thought.
Anyway, as the subject was topical, we invited a Government seismologist to give us a talk on volcanic activity in Kenya's Rift Valley. We were aware that there had been a major earthquake of 6.9 magnitudes in the Subukia Valley (about 30 miles from Nakuru) in 1928, but there had not been anything of consequence since then to our knowledge. In my naivety, I asked the expert how often there was evidence of volcanic activity in Nakuru.
"Oh," said the seismologist, "on an average, we have a tremor once every four minutes," he stated, quite matter-of-factly!
ONCE EVERY FOUR MINUTES!!! My house, scenically located on the slopes of Menengai, is in the first line of fire. If lava comes pouring out of the sleeping giant, I thought, Cybele, Lisa and I would be toast in seconds!
As it happened, we lived quite safely and slept quite soundly for a further five years in Nakuru till the Ministry of Education transferred me to Mombasa, Cybele's birthplace on Kenya's beautiful coastline, 400 miles away from the seismic danger zone.

Lava streams from the volcano in La Palma burying vineyards, houses.
cars, everything in their way.

Cracks and sinkholes in West Nakuru along fault lines.
From time to time, I have heard reports of increased volcanic and seismic activity in Kenya's Rift Valley. Longido, near Arusha, (not far from majestic Mt. Kilimanjaro, the highest mountain in Africa), has an earthquake or two of a magnitude of 5.0 or higher every month. The doom and gloom fear mongers are convinced that in the not too distant future a whole chunk of Eastern Africa is going to break off at the Rift Valley fault line and become an island the size of Australia! I'm not the gambling kind but I would quite happily wager a buck or two that such a catastrophe won't happen in my lifetime. What is much more likely is that Menengai is likely to continue to give the residents of Nakuru the jitters to an increasing extent. Nakuru was a town of 45,000 when I left. It has increased tenfold to a city of 400,000. A major earthquake or volcanic eruption in the area would have serious consequences for a city of that size. I pray it won't happen. I spent ten of the happiest and most productive years of my life there and have very many happy memories of Nakuru and its people, especially my students and colleagues.
Francis
- March 16, 2022