The man they call the lucky general 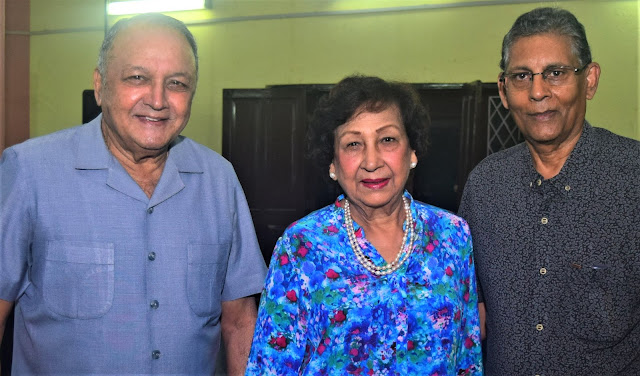 The late General Sunith Rodrigues with his wife Jean and me a few years ago when I met them in Goa. He was 88.

Business Standard: Prime Minister Narendra Modi on Friday said he was anguished by the passing away of former Army chief General (retd) Sunith Francis Rodrigues and that the nation would remain indebted to him for his exceptional service.

Rodrigues, who headed the Indian Army between 1990 and 1993 and served as the governor of Punjab between 2004 and 2010, passed away on Friday, an official statement said. He was 88.

Modi tweeted, "Anguished by the passing away of General S F Rodrigues. The nation will remain indebted to him for his exceptional service and contribution towards making India stronger. He was respected for his deep strategic knowledge. My thoughts are with his family and friends. RIP.

During my recent visit to Goa, I managed to spend just a few hours with two very special people: General Sunith Rodrigues and his wife Jean at their Defence Academy residence in Porvorim. Sunith is the young brother of Joe (Jawaharlal) Rodrigues who was the editor in chief of the Nation in Nairobi. He was in my estimation one of the finest journalists I knew. In many people’s estimation, Sunith was one of the finest of modern-day generals. Below is a little insight:

TIMES OF INDIA: We should not just produce highly qualified people; we should produce fine human beings." That's a sentiment coming from one of the finest soldiers that India has produced — General (Retd) Sunith Francis Rodrigues, VSM, PVSM.

Rodrigues served in the Indian Armed Forces for nearly 41 years. His competence won him the military honours of Vishist Seva Medal and Param Vishist Seva Medal. He rose to the highest position of Chief of Army Staff and retired in 1993. He now lives in Porvorim with his wife Jean.

He did combat flying during the 1965 war, but at the age of 82, he laments they don't teach moral science in school anymore and says that it is badly required. He should know; he has been chancellor of five universities. His justification is that Indians are products of Macaulay's education system, which was designed to break the cultural and spiritual values of Indians. "When Macaulay saw that India had neither thieves nor beggars, he knew they could never conquer India. So he foisted his system on us and had us believe their system was better. But India's spiritual values are great and more than qualified people, we need to produce good human beings now," he says.

He recollects how during his days as Governor of Punjab and administrator of Chandigarh, he got around 900 children off the streets and into homes. But even as chief of Army, along with wife Jean, he started a facility to help disadvantaged children from the services. What started with eight children around 1990 soon became an organization called 'Asha' that now has 34 centres all over India.

General and Jean have been married for 55 years. Theirs was love at first flight; Jean was flying for BOAC and was the first Indian airhostess with the airlines. He was a captain in the Indian Army and she was a British passport holder. Rules disallowed such a marriage so he sought permission. For one full year, the authorities kept him dangling. But love prevailed, he resigned and the authorities blinked.

Jean and the General have three children; eldest son Neale was in the merchant Navy and is settled in the UK, daughter Susan has been with British Airways for the last 27 years and is based in Delhi. Youngest son Mark got his MBA from Canada, his PhD from Vaikato University, New Zealand, and is settled there. All three are married and General and Jean have six grandchildren who visit them in Goa sometimes.

So what is the secret of his happy marriage? "God has been good. And we always put the family first. We have been very caring towards one another," he says of his family.

The couple still loves angling and General Rodrigues admits Jean is much better at angling than him. Among the dozens of family albums, one is full of him along with Jean and the grandchildren angling in the high seas; complete with huge fish they snagged. The couple also shares a love for gardening. The General also loves reading and is a keen fan of games. He enjoyed playing football, hockey, tennis and did boxing while in the Army. He wishes he knew to play a musical instrument but never had the time to learn.

During his career, General Rodrigues rubbed shoulders with the high and mighty of the world - British Prime Minister John Major, Rajiv Gandhi, the King of Bhutan, Colin Powel, Mother Teresa to name just a few. He was also Indian Prime Minister Narasimha Rao's special emissary to the USA.

Surprisingly, he has more compassion than arrogance. "People must care for one another more than they do. Helping others is a basic tenet of all religions. We must give up our why-should-I-care-attitude and put India's interest first. How many among us are genuinely interested to put India on the world map and willing to pay the price for that?" he asks.

General Rodrigues is the second eldest among seven children of his parents - father Francis, originally from Curtorim and mother Aida from Assonora. But the family was based in Bombay where General Rodrigues did his schooling and college before joining the Army. He has travelled all over India and other parts of the world. So why did he choose to retire to Goa? "Because Goa is home," he says simply.

Hindusta Times: Rodrigues died at a private hospital near Panaji, Goa around 1.30pm, family sources said. He had been admitted to the hospital for the last 15 days. “General M M Naravane, Chief of Army Staff (COAS), and all ranks of the Indian Army express heartfelt condolences on the sad demise of General Sunith Francis Rodrigues, who passed away today,” the Indian Army said on Twitter.

Known as a thinker and strategist, he leaves behind a legacy of utmost dedication and service to the nation, it noted.

Besides his more than 40 years of illustrious service in the army, he served two terms on the National Security Advisory Board and was governor of Punjab between 2004 and 2010, it said.

“Since his retirement, he has been engaged in social and literary pursuits and has also delivered numerous talks on strategic issues,” the army said