Insider’s view of Kenya Goans before and after Uhuru

Recently, there has been a spurt in publishing books on Goans in Africa. 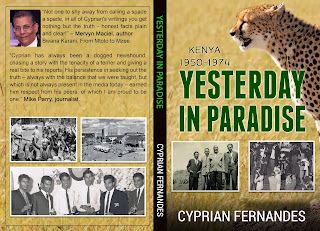 I am not very sure if there’s a renewed interest in the Goans who inhabited those parts of Africa where they constituted a vibrant and astute group among the other communities. It’s but natural that their stories need to be told and these African Goans be understood in the context of their lives lived in foreign nations for economic reasons and for the betterment of their own livelihood, far from their homeland, Goa, and also other places in India where the Goans lived to eke out a living.

The Goan community in Kenya provides a symbolic lifestyle enjoyed by the Goan communities in other nations, such as Uganda, Zanzibar, etc. The former Goan diplomat and twice Indian high commissioner to Kenya, Placido P. D’Souza, wrote in his forward to the book, Goans in Kenya, by Dr Tereza Albuquerque, “As elsewhere, Goans had made their way to Kenya in quest of material improvement - total lagoon - as employment and educational opportunities in Goa under Portuguese colonial rule dwindled progressively.”

In the book, while exploring the Goan presence in Kenya, she also gave glimpses of Goan communities in other East African nations. Her all-round view of how Goans experienced life and how they contributed to the growth of the community and shared experiences with both the larger Indian diaspora and the locals gives gave me a fairly good understanding of the progress made by Goans and how they sustained Goan identity and culture in these places.

In sharp contrast to Tereza’s historical perspective, comes an eye-witness account, plus a sort of memoirs and love-affair account of the place of his birth, growing-up and professional career as a newspaperman, from Cyprian Fernandes. From the title of his book, Yesterday in Paradise, one gets a sense of his deep feelings and love for the country and his sad and life-saving journey to England to avoid the possibility of being killed in post-independent Kenya. As a journalist, he was looked upon as a “man who knew too much.”

By all accounts, the book, though it covers from 1950 to 1974, is a straightforward account of how the author fared in Kenya before and after its independence from the British. He is candid about admitting that he lived “by my wits and by the seat of his pants.” He took the risks that come with being an investigative reporter and, as Kenya woke up to its Uhuru in 1963, Cyprian faced the dilemma of either staying on in Kenya or listening to his crying wife to save himself and his family by running away to safer lands.  His wife was worried and traumatized when informed that her husband had a “bullet with his name on it.”

I think he did the right thing by fleeing to England and perhaps saving himself the fate that befell Pio Gama Pinto and the agony that would accompany the family if a bullet had taken away Cyprian’s life. He’s now happy to be “bathing his mind” in sunny Sydney (Australia) and rightly dedicates the book to his wife, Rufina.

Cyprian’s telling of his story, born of a tailor and having lived his young life in the shadow of poverty in the downtrodden areas of Eastleigh and dropping out of school-age 13, is heart-rending and, at the same time, awesome. He captures Kenya’s natural landscape, its magnificent sights of mountains and gaming fields of wild animals, with great munificence, and its political landscape, especially the guerrilla movement, Mau Mau, with a critical and analytical perspective. He doesn’t spare the African leaders who assumed power after the British left of engaging in nefarious land-grabbing activities and engaging themselves in power struggles with incessant internecine tribal wars.

In the African context, Goans also behaved like a tribe, and Cyprian has invariably touched upon the Goan class and caste-wars that resulted in the formation of many Goan social clubs, and the St Francis Xavier Goan Tailors’ Society in Nairobi. Goans considered themselves as second after the British in the social hierarchy of African society and were proud to be called “black Portuguese” in the early days of the migration. The author also pinpoints why the Goans didn’t want to associate themselves with the Africans in their freedom struggle, as that would mean going against the British and fearing deportation. They faithfully served their masters, as Goans were looked favourably by the British. With most working as Bwana Karani (Mr Clerk), Goans were the backbone of the administration.

Commenting on the politics of the day and some of the key Goans who played important roles, he mentions the circumstances and occasions which he couldn’t do so when he was with The Nation newspaper. His later posts as a parliamentary reporter and his numerous trips with the Kenyan delegation to various political summits and conferences gave him a ringside view of events as they unfolded in the new Kenya. He also comments on events in Uganda, and the rise of Idi Amin who sent Asians out of the country without batting an eyelid. Many Goans thank that such an event took place, as it gave them and their children refuge in Canada and UK.

Devoting some chapters to sports and sportsmen, he recalls Goan contribution to the sporting tradition of Kenya. Alongside the long-distance Kenyan runner, Kipchoge Keino, Goan sprinter Seraphino Antao and his exploits are duly noted. So is Kenya’s famed hockey team which had many Goans with excellent skills.

But more than that Cyprian has given a fair account of the life and times of one of the greatest of Goans in East Africa, Pio Gama Pinto. Spurned by many Goans as a trouble-maker and also labelled a communist, Pio was a nationalist to the core. Pio’s socialism was anathema to pro-Portuguese Goans. Pio and Fritz Eval D’Souza, who is still living, wore nationalism on their sleeves. Pio was the ideologue of Mau Mau, and was seen as the rival to Jomo Kenyatta, who led the rebellion. The author quotes Fritz, the deputy speaker of parliament, saying that the “powers-that-be” assassinated Pio, an MP, as Fritz recalled seeing both Pio and Kenyatta arguing in the corridor of the parliament.

There was a conspiracy of silence among the African leaders, including the half-caste Goan, Joseph Murumbi Zuzarte, born of a Goan father and a Masaai mother, but took on his mother’s identity. The hand of Kenyatta is suspected in the death of some top African leaders, including Tom Mboya, who Kenyatta saw as a rival to his political authority. Kenyatta was all-powerful as the president of the newly born nation.

Despite the book having a couple of extraneous essays, its relevance to understanding the Goan sojourn in East Africa is indisputable.

(Eugene Correia is a senior journalist)