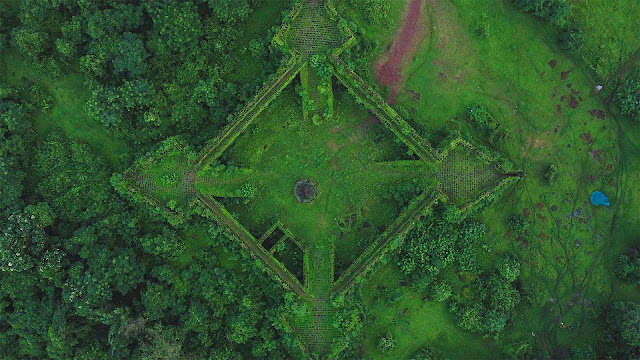 As most of my email buddies know by now, when I fire up my computer in the morning, I'm greeted by the Bing Image for the Day - which I have often shared with you. I wasn't particularly impressed with today's image until I discovered that it was taken in Goa, not very far from Chorao where my father grew up. It's a photograph of Corjuem Fort, a laterite rock structure about 4 km. from the village of Aldona where dad had relatives and was able to attend secondary school after completing primary school in Chorao.
The Fort is one of only two inland forts in Goa and is built on an island in the Mapusa River, a tributary of the Mandovi. It commands an excellent view of the river and surrounding countryside reputed to be among the most scenic in Goa. Built in 1705, its battery of four guns kept marauding tribes at bay when needed. Now it enjoys protected status because of its historic interest. It is a popular tourist destination, especially for hikers.
Like any historic structure, Fort Corjuem has its myths and legends. The most popular one concerns an ambitious Portuguese woman named Ursula e Lancastre who was frustrated by the limitations of a sheltered woman's life and was determined to see man's world. She dressed as a male and took up navigation and military roles. According to one source, her masquerade went undetected for many years until she was captured as a prisoner of war and stripped of her clothing. Fortunately, the Captain of the Guard was impressed by her bravery - or, possibly, her feminine charms? Rather than taking harsh punitive action, he courted and wed her. The source remarks wryly that this was probably not as great a punishment as death would have been...
Rafiki
- February 04, 2022