THE STORY OF TWO ELEPHANT FEET

Marsabit was noted for marauding elephants during my time there in the early 1950s, and it was not uncommon to see a herd of elephants outside one’s Government quarters, especially at night. 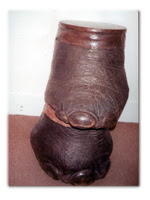 Quite often, as one relaxed indoors in the late evenings, listening to music from the old-fashion rather bulky portable battery-operated radio, one would hear the crash of breaking branches as the elephants feasted happily and noisily on the pepper trees outside our houses. For the locals, they were more of a pest as they raided their shambas, trampling over their crops and destroying what little home-grown food they’d hoped to harvest. It was therefore not uncommon for the Administration to call on the Game department for help from time to time.

On this particular occasion, the individual who arrived to do the culling was none other than Terence, the brother of George Adamson (Bwana Game fame) and brother-in-law of Joy (of Born Free fame). Terence had done a good culling job and the Administration labourers (notably the Turkana) were delighted at this unexpected bounty of fresh meat. I, on the other hand, was keen to acquire two of the feet as trophies (something to brighten my then sparsely-furnished bachelor home!). Imagine my disappointment when the men I’d sent returned empty-handed saying, “Bwana, watu wamekwisha kula wote" - the men have ‘polished off’ the lot!) Seeing I was unhappy, they quickly added that there were just two partly eaten feet still available, if I wanted them. When I said, “Ndio” (yes), they quickly disappeared and returned with 2 feet – one fore and one hind. We instantly set about scooping out the meat and bones, and after thoroughly rinsing out the feet with gallons of Dettol and Jeyes Fluid-filled water, we began filling them tightly with soil from the garden. The feet were then left outdoors to dry out. Imagine my horror when, on waking up one morning, I found the feet had gone!

I was very upset and asked some of our Station hands to look for them. Moments later they returned with both feet, one slightly damaged with sharp hyena teeth marks clearly visible.

Rather than risk leaving them out again, I used to keep them indoors and when they had hardened sufficiently, I emptied all the soil they’d been stuffed with and asked one of our Government truck drivers to leave them out in the Chalbi desert for drying out, on their next safari. This they promptly did, and the feet remained in the desert for 3 long months. No one dare touch them as they knew they belonged to a Bwana in D.C.’s office at Marsabit! When they were brought back to the boma, they felt rock hard. My next job was to stuff them with the moss found around Marsabit - (we called it elephant grass or ‘old man’s beard), and later send it to a cobbler friend in Moyale for converting into two sturdy stools.

This he duly did, covering the top with a decorative hide. I’ve lost count of the number of tins of boot polish I’ve used on these feet for the past 60 years!

While I remained at Marsabit, there was no problem about possessing them, but when the time came for us to leave for the U.K. many years later, I applied for, and obtained a Permit from the Game Department in Nairobi. I had two crates specially made to ship these trophies to England and they now have pride of place in our lounge. Understandably, not everyone was pleased to see them and feel that they belong to the elephant (our grandchildren feel so too!) – but can I assure them and all animal lovers that this, and other elephants shot during the culling exercise, were not shot for pleasure or gain; the only reason I wanted to bring them with me to the U.K., was to retain that link with Marsabit and its people, who I love and still keep in touch with.

Late in 2010, I was fortunate in meeting John Rendall of A Lion called Christian fame. As he is involved with the George Adamson Wildlife Preservation Trust in Kenya, he willingly accepted these elephant feet on behalf of the Trust. My family and I were overjoyed that they were returning to the Africa (Kenya) where they rightly belong.