The story of my mother’s family

My grandfather's orchestra, he is seated in the middle. 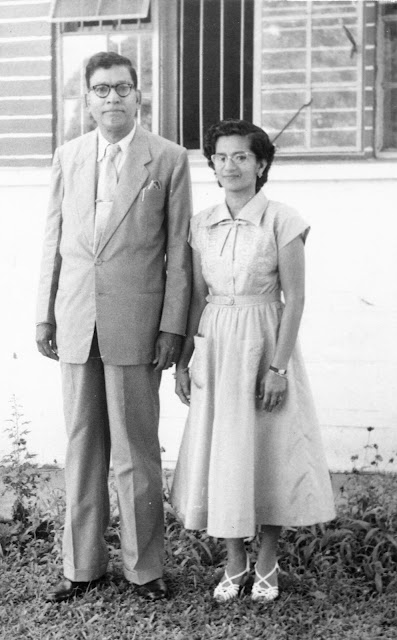 My mum and dad in 1958. (My dad’s initials became his name – PCSC. Some people got the gist but didn’t remember exactly and called him RSPCA Nazareth.) 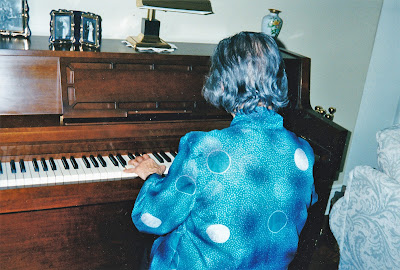 My mother playing the piano when she was in her eighties. My mother, Anne’s family story is one of music. Grandpa Antonio Matias Gomes had an orchestra and they used to travel around India playing in theatres in the time of the silent movies. At the turn of the 20th Century, he got a contract with the British to play in Theatres in Kuala Lumpur, Malaya. He was so enthralled with KL that he settled down there where most of his children were born. He is credited by the national music archives with being the first orchestra to bring Classical Music to Malaysia. Grandpa’s instrument of choice was the violin.

Mum’s father was not the only musician in the Gomes clan; at least another brother also had an orchestra and settled in KL. Another of his brothers Manuel Salvador had two sons Johnny and Joe Gomes who were well-known in the music scene in Bombay. They played in bands and composed music for Bollywood movies. This played a part in the stories I am about to tell you.

Let us go back to Uganda in 1962. This was my second year at an African Catholic boarding secondary school - St. Mary’s College Kisubi (SMACK) which was popular with Goans. It was also the year that Uganda got its independence from the UK. To celebrate Independence the school decided to host a Tattoo during which students from each tribe in school was asked to do a cultural dance around a huge campfire on the college sports field. Likewise, the Goan students were asked to put together some cultural dance. Only one problem – we were all young guys and we had no knowledge of any Goan cultural dance. None of us even knew a Konkani song!

To rescue came Tony Rodrigues, who was one of the seniors, then in Form 5. Tony was a musician and was well known for playing the accordion and singing. Tony told us about this new Hindi popular song he had heard – Eena, Meena, Deeka. It was the rage in Bombay as it was the lead song of a Hindi movie of the same name. Tony suggested that he would sing it, the rest of us could sing the chorus (“Rum, pum, po”) and dance the twist. The song even had the Konkani words “Maka, naka” in it together with “Tanganyika,” which made it seem bonafide. And that is what we did. Phew! We were embarrassed as hell, but it got us through the night. (The following year we learnt to dance a Mando for the 1963 Tattoo.)

Fast forward to 2010 – almost 50 years later, location – Mississauga Canada. I had recently come to know my first cousin Manuel Gomes – son of Joe Gomes – and he emailed me an article on

the Goan Musicians of Bombay written by Ashwin Panemangalore. I read through it and discovered to my amazement that my Uncle Johnny Gomes was the co-creator of “Eena Meena Deeka”! I immediately emailed Tony who was now a Professor in the University of Nairobi and sent him the article. He replied, “Indeed a small world”.

One day while the family was at my sister Ruth’s place in 2008, I brought up the subject of Nora Jones’ music, which had become very popular in her native US. As we were talking about her, mum asked “Who is Nora Jones?” Trying to capture more than just her music, I said that she was Ravi Shankar’s love child. Mum goes “Ah! Ravi Shankar ……… I met him.” To which I added “Wha-a-a-t? You met Ravi Shankar? When?” She went on to say that she met him at her cousin, Johnny Gomes’ house in Bombay (Mumbai) in the 1950s before he became famous. Johnny and Joe (his brother) Gomes were well known in the music scene in Bombay. They were professional musicians. Ravi used to come to Uncle Johnny’s place to jam.

The Gomes music story is one that keeps on giving.

An Extract from my Memoirs in work.