All the babies will be brown 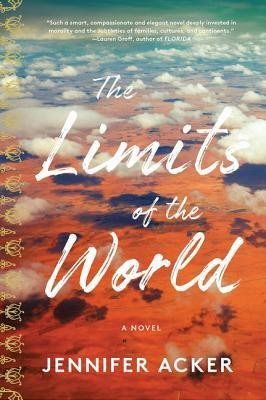 The Limits of the World: A Novel  by Jennifer Acker (Goodreads Author)

The Chandaria family—emigrants from the Indian-enclave of Nairobi—have managed to flourish in America. Premchand, the father, is a doctor who has worked doggedly to grow his practice and give his family security; his wife, Urmila, runs a business importing artisanal Kenyan crafts; and their son, Sunil, after quitting the pre- med track, has gotten accepted to a PhD program in philosophy at Harvard. But the parents have kept a very important secret from Sunil: his cousin, Bimal, is actually his older brother. And when this previously hidden history is revealed by an unforeseen accident, and the entire family is forced to return to Nairobi, Sunil reveals his own well-kept, explosive secret: his Jewish-American girlfriend, who has accompanied him to Kenya, is, in fact, already his wife. Spanning four generations and three continents, The Limits of the World illuminates the vast mosaic of cultural divisions and ethical considerations that shape the ways in which we judge one

another’s actions. A dazzling debut novel—written with rare empathy and insight—it is a powerful depiction of how we prevent ourselves, unwittingly and otherwise, from understanding the people we are closest to.

In the 1960's and 1970's, an exodus of Asians took place from East Africa. While they wished the newly independent countries - Kenya, Uganda and Tanzania- success and prosperity, many Asians felt that the future for them and their children was likely to be fraught with problems if they stayed put in Kenya. Besides the policy of "Africanisation", many Asians questioned whether there was a future for their children.

The expulsion of Asians from Uganda  by the monster Idi Amin was perhaps the biggest single factor that made Asians feel that it was time to find a more permanent home and future for their families. The vast majority opted for Great Britain because their British passports entitled them to settle in Britain. Those who did not qualify to enter Britain (and some who did) applied in thousands to emigrate to the U.S.A., Canada, Australia and a handful of other countries.

I don't have the exact figures but I would estimate that between 1960 and 1975, well over a million displaced Asians put down roots in countries all over the globe. Each of our stories is different; my family owes its presence in Southern Alberta to a farming couple from Cardston, now deceased but forever remembered with gratitude and love.

That this exodus and resettlement was achieved relatively smoothly and peacefully is greatly to the credit of not only the receiving countries but also to the fact that most Asians became productive members of their countries almost immediately. Very few claimed unemployment benefits. Whether it is their business acumen, education, industry, their financial resources or whatever, within fifty years of the exodus, Asians, particularly Indians have done very well financially and their children have taken advantage of educational opportunities to become qualified professionals in every sector of the workforce. During the present pandemic, for example, it was easily apparent how many of the  medical experts and spokesmen were of Asian origin.
By and large, the first generation of Asians was conservative and keen to remain true to their cultural roots. Most recognized, however, that as time went by, their sons and daughters, and even more so their grandchildren would become more liberal and pragmatic in adopting the mores of the pluralistic society that they were living in. Several writers have tried to capture the pressures that have been placed on emigrants, steeped in centuries of their own culture, having to adapt to a new world, a world often not sympathetic to foreign customs, attire or beliefs.
It is in this context that I read an excerpt from Jennifer Acker's recently published book, "The Limits of the World". This was the excerpt sent to me by a niece:
https://www.terrain.org/2019/fiction/some-day-all-the-babies-will-be-brown/
Anyone who is familiar with Jennifer Acker's  and Sunil's world is likely to be intrigued by this unlikely couple if only because couples like them are becoming increasingly part of our landscape. I certainly enjoyed the excerpt to the point that I immediately ordered a copy from Amazon and was promised delivery by mid-January. I have given some more details of the book in the attachment if you are interested. To those of you who are not interested in this topic, my apologies for the length of this introduction.
Francis
- December 31, 2021