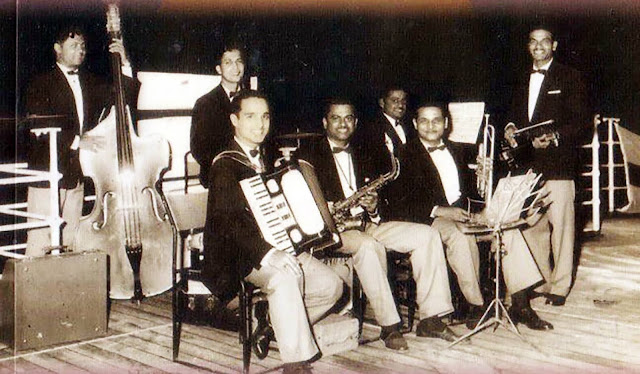 Dar es Salaam (Abode of Peace) was founded my Sultan Majid Bin Said in 1865, give or take a year or so. Very much like the magical island of Zanzibar (island of black people), Dar has always fascinated anyone who has heard of it, read about it, or was told about it the first time. Over the next few days, I hope to bring you some historic stories and photos about the Goans of Zanzibar. Thanks to Kenneth Mascarenhas for collecting material (from a brochure for the GI's golden anniversary) from Mervyn Lobo who lives in the US. The first is a brief history of the once famed G.I. Jazz Swingers by Banu Colaco.

At the New Year’s Eve function on December 31, 1947, more than 500 members and their families came to the Goan Institute, only to discover that the band hired for the occasion had not turned up. I had migrated from India earlier that year and played the drums and the violin for the Dar es Salaam Goan Musical and Dramatic Society. In desperation, the Management Committee asked me for my help and I scraped a group together, went back home for our instruments and began playing just after 10 pm. Our group had Jerry Luis on his accordion, Jimmy Fernandes on guitar, Lacy (Brandy) Caldeira on drums and I on violin. We had the crowd dancing till the early hours of the morning.

As the function was a huge success, the then president asked if I could form a band to play regularly at club functions. I agreed and persuaded the Management Committee to spend the then princely sum of 10,000 shillings for the purchase of a new piano and drum set. Thus, the GI Jazz Swingers band was formed. The initial group consisted of Jerry Luis (accordion), Tony Ferns (piano), his brother Neri (drums), Jimmy Fernandes (guitar) and myself (violin). The following year my brother Paxy (who had come from India) joined us and in 1950 we were joined by Manu Rodrigues. Manu played a sweet violin and arranged the music, but it was his delightful crooning that won him many admirers, mainly female.

Over the years that followed, there were many comings and goings and Jazz Swingers moved from being a string band to a swing outfit.

As the popularity of the Jazz Swingers grew, the band’s services were sought by various other organisations and clubs. For a while we had a monthly contract with the Tanganyika Broadcasting Corporation. However, the gig (engagement) that brought the Jazz Swingers’ name into the forefront was our weekly gig at the “Ocean Breeze” which was the city’s most popular restaurant and nightclub.

In 1959, (I remember them in Nairobi) the Jazz Swingers together with their families toured Kenya and Uganda and played at the Goan Institutes in Mombasa, Nairobi, Kampala and Entebbe.

With the advent of the 1960s, the band started to break up and eventually disbanded as some of its members were transferred from Dar es Salaam and others migrated to Canada, the USA and elsewhere.

However, we had a few last hurrahs. In 1984, Terence Pereira, who was the President of the Organising Committee for the annual Tanzanite Dance, persuaded members of the Jazz Swingers who were resident in Toronto (viz Manu Rodrigues, Jerry Luis, Nelson Fernandes, Luis Pereira, Paxy Colaco and myself and Gil Vaz who was visiting from the US to get together and play few sets at the function.

The GI Jazz Swingers are proud to have been part of the history of the Dar es Salaam Goan Institute.

The above piece was part of a congratulatory message on occasion of the Dar es Salaam Goan Institute’s Platinum Jubilee.

The history of the Jazz musicians of Dar es Salaam is captured beautifully in a book:

Waiting for the Sunrise by Judy Luis-Watson is now available at Amazon.com (in both print and ebook versions). For buyers based in India, we recommend you order via Goa,1556. Details from jazzgoandar at gmail.com In Goa, a special print edition is also available via goa1556@gmail.com

Goss from a very long time ago …

Wonder if anyone can remember some of these!

(THIS excerpt from a Dar GI celebratory brochure will probably fuzzle minds of folks who are not familiar with the vintage. I reproduce it in honour of the folks gone past and a remembrance of the ways it used to be.)

Do you know that…

The Alexandra Cinema Hall, where the first two general meetings were held, was situated at the corner of Makuganya and India streets … we still talk shop there, don’t we?

Two gold crosses were buried in the premises of the Institute, one each occasion of the two foundation-laying-ceremonies … no treasure hunt please, lest we should lose our only means of a redemption!

The first streams of what is now the St Francis Xavier’s School, Chagombwe, were conducted in the premises of the old building on this site … quite naturally, as it has always been the aim of the Institute to promote intellectual activities!

Another founder member, Mr A E L Fernandes, has gone into farming … stronger foundation in self-reliance.

Chartered Architect Tony Almeida had said that the present building of the Institute was of a quality, that would need no apology anywhere in the world … of course, a thing of beauty, is a joy forever.

There were 620 children in the age group 1-12 years for the Christmas party in the Institute Hall last year … there were many more outside awaiting entry into that age-group.

It is customary to celebrate the anniversary of the Institute on the occasion of New Year’s Eve …ah ha, so that is the origin of the two free drinks … and then after killing two birds with one stone can it be said that we are not frugal in spirit?

Head Steward Mohamed Athmani (alias Fupi) is now 49 years old and has been in the service of the Institute for 31 years … he is heading for a double golden (or a golden double).

Mr Dominique De Souza designed the cover of this brochure (on the occasion of an anniversary celebration is presume) take a bow, Dominique, take a bow.

And finally, do you know that we are 50 years old today? You don’t say! Well happy birthday then, ad multos annos and all that, and lead us Kindly Light, onwards to a diamond and platinum. S.Z.S.