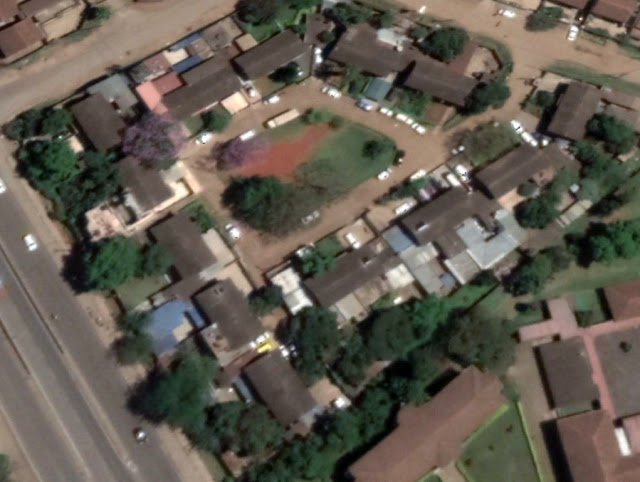 THERE ARE many Goans, once the younger generation but today the older generation, who will remember with pride the Goan Housing Estate in Pangani, Kenya. The estate, if I am right, was the initiative of the  Goan  Overseas Association. Like everything else Goan, the estate was cause for celebration but had its detractors. I think it was originally going to be called the Dr Ribeiro Goan Estate. It never happened.

From another friend: "The Goan Estate only became a reality solely because of the determined lobbying efforts of the late Dr A C L desousa. Dr Ribeiro had absolutely no part in the venture. It was Dr desousa's brainchild. He lobbied Dr Gregory, the Mayor of Nairobi in 1955, to secure the land, secure funding, etc, and created the Goan Estate consisting of 26 semi-detached homes a reality.

"An official opening ceremony was held the centre oval. Dr Gregory was the guest of honour and the estate was named The Dr De sousa Goan Estate. However, the brahmins of the estate objected to the naming and boycotted the ceremony. They went as far as hanging black flags from their balconies. They conveniently forgot that without Dr De sousa, there never would have been a Goan Estate in the first place."

I thought the Goans who lived in the estate were a pretty happy lot. Sometimes, time does make liars of us all. They belonged to the Nairobi Goan Institute, the Railway Goan Institute or the Nairobi Goan Gymkhana. They worshiped at either the St Teresa's church in Eastleigh ( a 10 or 15 minute walk) or the St Francis Xavier's Church at the start of Forest Road and a stone's throw from perhaps the best Goan initiative, the Dr Ribeiro Goan School.

One way or another there was plenty to be cheerful and celebrate about this group of Goans who lived a few steps away from another group: the Goans who lived in the Nairobi City Council flats which have since been raised recently and in their place more than 1000 flats are being built.

As time continues to march on, so does the memory of the Goans who gave so much to the building of modern Kenya.

I am indebted to Tony Reg D'Souza, Eva Fonseca, Antonio Desousa, Filandro Fernandes and a few other people who have helped to remember the Goans who lived in the estate. I am sure there will be one or two or three names missed from the list below and I will update them as I soon as I am advised.

Today, there are still a couple of Goan families still living in the estate. We are not done yet!

Two versions of the residents" 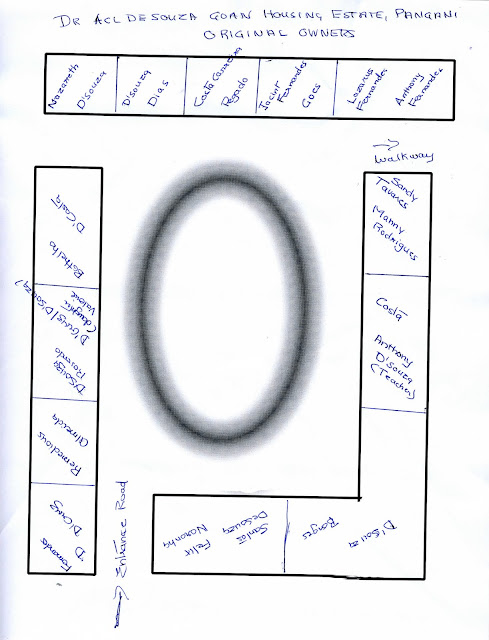 The Goan Estate had at its heart a rectangle (some said it was a triangle) and all the houses faced this green playground. Twenty-six families purchased homes here, two to each block.

In the last block in this line were Mr. & Mrs. Peter D'Costa, Edward, Gladys, Glafira, Guenivera, Benjamin, George and Gileta.  To their right were Mr. & Mrs. Botelho, Joy, Grace, Ruby and Jude.
Next door to them in the next block were Mr. & Mrs. Francis D'Cruz, Valerie, Clive and Desmond

To their right, in the next block, were Mr. & Mrs. Francis D'Cruz, Valerie, Clive and Cedric and on their right was Mrs. Rosendo and her 2 daughters (her husband died a few years after they moved in.

To their right, I think it was Mario and Wavell and family on the left side and on their right were Mr. & Mrs. Remedios, Joyce, Jean, Marian, Joseph and Morris.

To the right of the Remedios home and the last one on this line were Belinda and her family and I do not remember who their neighbor was.

Now to the next line on the left-hand side of the estate were Mr. & Mrs. John Nazareth, Olga, Paul, Ophelia, Sonny and Olivia and to their left were Mr. & Mrs. Monteiro and their daughter.

To the Monteiro's left were the Abreu family and in their block were Mr. & Mrs. J C J Dias, Ivera & Ino.  Mr Dias was a school committee member.

In the next block were Mr. & Mrs. Costa Correia and family and Marilia Pegado and family.

Next to the Pegado's were Mr. & Mrs. Fernandes, Armando, Renato and Vera and next door were the Mr. and Mrs. Goes (Leo and Elizabeth). Next to them was our house Mr. and Mrs. Lazarus Fernandes (Joanna, Astrid, Mitelia, Yasmin and Lactancio). Next to us was Mr. and Mrs. Anthony Fernandes (our dad's brother) (Eugenia, Luis, Sandra, Filandro and Zelia).

On to the third line, were Mr. & Mrs. Tavares (headmaster/teacher at Dr Ribeiro Goan School) and family, their next-door neighbors were Manny Rodrigues and family.

In the next block were the D'Mello family, and their next-door neighbor was Mr. & Mrs. Anthony D'Souza and family (teacher at DRGS).

In the last block on this side were the Quadros family and next door were Mr. & Mrs. Felix Noronha, Sonya, June and Fernanda.

CLIFFORD COSTA CORREA: Thank you for your blog and sharing these pictures. The Goan Estate was a fun place to live and it was indeed a very close community. Many of us that lived in the Goan Estate moved to the UK, Canada, USA & Australia but many of us remain in touch, thanks in a large part to Filandru Fernandes who from time to time organizes "Zoom calls" and we get a chance to talk about the "fun time" we had growing up in the Goan Estate. The Goan Estate looks different now but these pictures brought back fond memories and I am impressed that Tony, Eva, Anto and Fil were able to identify virtually all the residents in the Estate. The only one I would question was the house next to Anthony D'Souza, I thought it was Walter D'Cruz but I could be wrong! Thanks again, great memories!

‘I think the field is more round than oval and it was fun playing on the grounds even though it was about half the size of a soccer field. As far as Christmas, I have some memories of Santa arriving in a convertible and all the kids gathering up on the grounds. A few Christmas Carols and sometimes a skit prepared by the kids, which would provide entertainment for adults and kids alike. Most homes over Christmas would have a star hanging proudly by the stairway in the hallway that could be seen from the street. As we grew older Christmas Day was more about “house hopping” and many of us would go door to door to share a glass of Christmas cheer, needless to say by dusk we were all feeling no pain but we were still ready for the dance at the GI. The Goan Housing Estate was a great place to live, a close & supportive community.’

Whether there were any hard feelings with the adults after the boycott, I could not say but if there were it did not seem to last.  I do remember when the black flags came out on the day, feeling ashamed and I wondered what Dr. Gregory would think of us as the Goan community being so ungrateful to a passionate Goan pioneer who did so much to make the Goan Estate a reality.  For us the kids, we were all friends and the boycott did not matter.  We just were friends and always had such fun playing all sorts of games in the middle oval every opportunity we had.  I will say that there are some here in Toronto who conveniently choose to say the black flag boycott did not happen!

The photographs below have been provided by Eva's friend Baldip Khan, a classmate from Dr Ribeiro's. She still live in Kenya.

REMINISCENCES Rudolf Anthony Scerri, Carmelite       (The following is an excerpt from a larger document in which Fr Anthony Sce...