"Twilight" a review by Shirley Gonsalves 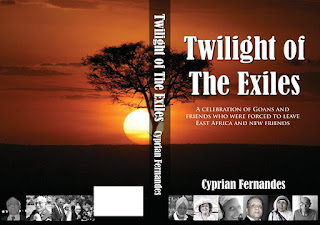 Review of Twilight of the Exiles by Cyprian Fernandes

Cyprian Fernandes, a well-known writer and popular journalist, is a Kenya born, ex Nairobi Goan, who now resides in Sydney, Australia. The author of the much acclaimed, Stars Next Door, which captured the stories of the sports stars within the East African Goan community of his generation. Yesterday in Paradise, was another personal and historical account of life in East Africa of members of the Goan community who lived there. Yesterday at the Nation, provides more accounts from the days the author first worked as a sports journalist at the Kenya based newspaper. His latest book, Twilight of the Exiles, comprises of some forty one stories written by migrants who are all originally from Goa, a small Portuguese enclave on the Westcoast of India on the Arabian Sea, but most of whom were forced to leave Africa and relocate elsewhere.

In this latest contribution by Fernandes, to document the stories of members of the Goan diaspora and in particular of his own generation provides some accounts in first person, others in the form of obituaries of dearly departed friends and family, some in the author’s own articulate words.  Somehow these compelling accounts draw you in and you find yourself lost in time and space through the fascinating stories that are told. Somehow, the connections are there, people, who will inspire, you will admire and more importantly you will enjoy reading about. Whilst it is far too difficult to single stories out, as each one is powerful in its own way, on a personal level, the story of Meldrita (p.9), her love of sport and sheer athletic skills and dedication. Augmented with photographs of the young woman in action, triumphant and then later on in her life, are a testament to this era. Strong, resilient and determined. As well as, The Longest Honeymoon, by the late Elsie Maciel, (p. 197), who I was privileged to have met. This is a beautiful account of her early life in Kenya as a newly wed to the much loved and well- known author, Mervyn Maciel. You don’t have to dig too deep for hidden gems in this volume, figures such as  Edna  Monteiro nèe Fernandes, (p.212), and I did enjoy the contribution by Denis Andrew, A Priest on the Run, (p.275), on his love for running and his account of running the Dili marathon, in Timor Leste, where I had lived for some years.

This group, who in many ways are a relatively small community, evolved in a close- knit way, first in East Africa, and have now become a burgeoning successful migrant community spread across the globe. This attractive, well laid out volume brings together a blend of first and sometimes second person accounts of those people whose lives are a representation of a transformation from a comfortable life in East Africa,  thrust into an often unwelcoming  and uncertain future of fragmentation and not to mention their loss of livelihoods,  businesses and professional status with many having to gain new skills,  retrain and adapt to and survive on relatively little, in the initially largely hostile wider diasporas of Australia, Canada, UK, elsewhere and in some cases Goa.

This style of representing individuals, challenges the stereotypical views of migrants and refugees, towards gender, race and class and is helpful for those studying into the history of the diaspora. The text is augmented by photographs that many will find an affinity to, including the classics such as weddings, family portraits, tournament sports teams and school photos as well as individual private photographs capture a range of events, faces and names that seem distantly familiar to you as well as the unknown community heroes and heroines of their time.  A welcome move away from anachronistic style of history, traditionally about kings and queens, ie. elite members of society, the text boarders into the domain of social history bringing a rich texture to historical narrative. Fernandes attempts to document these accounts through the words and pictures of the individuals themselves. In a community not particularly well known for their business acumen or political enterprise this volume shows otherwise by recording those from all walks of life.  Contributions to the volume expose the political, social and cultural nuances of the time. Their schools, churches, pastimes and social lives woven into the political milieu of the period.  Many migrated to Canada, UK, Australia, some returned to the land of their ancestors, Goa, or to other places in India, the Gulf States or Portugal.

The introductory dedication to the volume by Fernandes, enhances the book in an insightful way, using the indigenous words for terms that invoke nostalgia for his readers/ contributors. In including his own account and experiences Fernandes adds so much to the text and context. He also adds that memories span his generation and that of his own parents too. Interestingly, he muses, Nostalgia binds us all and memory and nostalgia are stepmothers of a kind.

a centrifugal force in community building. A common social activity bringing the youth of the community together body, mind and soul. The stories are biased on sports such as football, hockey, cricket and athletics.

Whilst the inclusion of information on Goan clubs, in a chapter by the author on, The Goan Clubs and Goan Culture is most welcome as these institutions were pivotal to social and culture life and cohesion at the time. However, an explanation of some of the reasons and rationales behind these clubs would provide some background to why they are sometimes referred to contentiously. For example the excellent contribution by the author on some of the reasons for the neglect of the ‘mother tongue’ of this particular community, Konkani,  is an invaluable one.

The text is augmented by photographs that many will find an affinity to, the classics such as weddings, family portraits, tournament sports teams and school photos as well as individual photographs that capture a range of familiar and unknown community heroes and heroines of their time.  Work, social, religious, and cultural activities are included, however, are largely neglected here. Though this is probably not the fault of the author, rather than those who have bravely chosen to share their stories? Based on their memories these contributors should be commended for the inspiration they provide as role models. The glamour as well as the terror, sadness and poverty and hardship can be gleaned from the text which also reflects the courage and adaptability of these people whose lives tell a story of how a community shaped our understanding of community, identity and diaspora. A number of contributors such as that by Armand Rodrigues, (pp. 250-267), gives a vivid and enriching account of his experiences of Goan culture and society and his personal interactions of his memories of Goa which adds to the historic richness of the volume.

These stories are a treasure trove, since many from this community have passed away with their stories untold leaving a gap in our knowledge of community history and for historians attempting to compile any contextual analysis. Hopefully, it will serve to encourage others to share their stories of this disappearing community before it’s too late.

The addition of stories from other communities with connections to Goans, their acquaintances and spouses adds a dimension to the book as well as including some well-known and prominent figures of influence in the community. The intricate web of the lives of this generation helps us to gain a sense of perspective of a remarkably resilient, outward looking and yet close-knit community.

The book is a resource for those compiling family histories, researchers and anyone interested learning from and about the life histories of a migrant community that has moved across at least two and in some cases three continents. Although relying on memories or memoirs is often considered an unreliable source for researchers in themselves, they can be used to reinforce other evidence and add context for a community with a hidden story. More importantly, these accounts can provide a sense of continuity and heritage for future generations to be proud of. I can almost hear the voices of this generation say, “How quickly did our lives become history?” I can only reiterate that history is about the present, just as much as it is about the past. Here, Fernandes has provided an opportunity for the voices of those often unheard.  This collection of hidden legends is a valuable and welcome one and hopefully this is just the start.