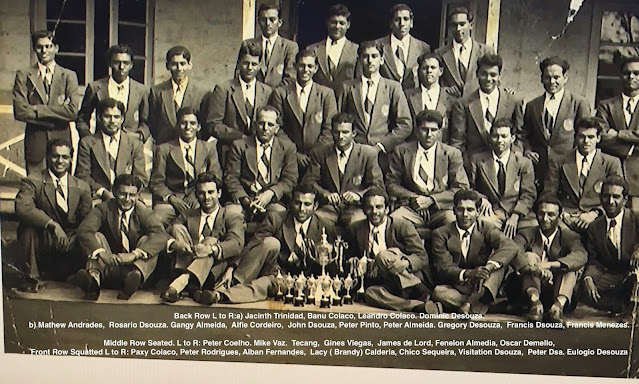 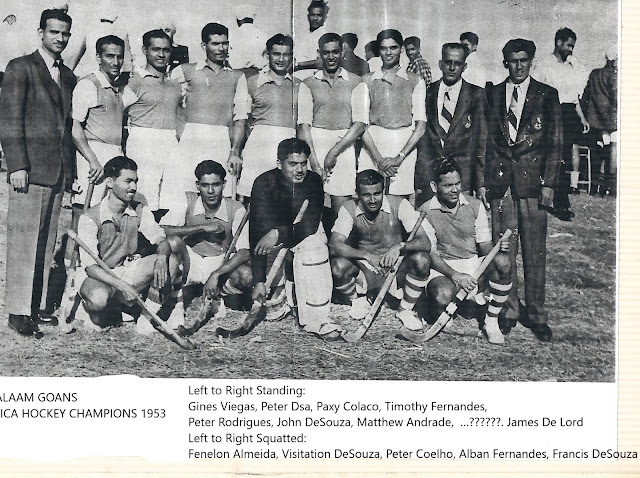 WELL, it’s happened. Dar es Salam Goan Institute recorded its most resounding victory on the field of sport when it beat the Sikh Union of Nairobi 2-1 in the final of the M R D’Souza Gold Cup. The victory has established the Dar team as the premier hockey team in British East Africa.

Splendid cut and thrust hockey was served up throughout the 60 minutes of the match.

In many respects it was an amazing game. It is a long time since the Nairobi crowds have seen a visiting team take such a hammering and yet, hit back and win the match.

There was speed, thrust and bite in every Sikh Union move but the Dar es Salaam side’s greater determination  and “we’ll show them” attitude saw them home at the finish.

It is not too much to say that the Goan  defence won the match for the challengers from Tanganyika. Time and again, deep defenders Alban Fernandes and F X D’Souza came to the rescue when the fiery Sikh forwards quintette, always on the attack, threatened to score.

The Goan forward line attacks were spasmodic, but they converted two of the four chances that came their way.

It is difficult to single out a Goan player for mention. Each one did his best.

The first half produced no goals, but was fraught with thrills. The Sikh Union enjoyed market territorial supremacy. However, in the second half, a strong raid by the Dar es Salaam side saw the ball flash to outside right Peter Rodrigues whose shot zipped past the helpless goalkeeper.

And other period of Sikh supremacy followed but a sudden breakthrough in the 52nd minute saw the Goans forcing a penalty corner-bully. Inside left Mathew Andrade found no difficulty beating goalkeeper Avtar Singh.

Hardly had the cheers of the Goan supporters died down when the Sikh Union scored a well-deserved goal through Surjeet Singh in a goalmouth melee.

Encouraged, the Sikhs forced corner after corner but amidst terrific excitement the Goan side held on successfully to their slender lead.

After the match, the Mayor of Nairobi, Alerman Dr J R Gregory presented the handsome cup to Peter Coelho, captain of the Dar side.

Hooligans at a hockey match in Nairobi

Some of our local teams must invariably indulge in rough and robust hockey which even from a spectator’s point of view is a most nauseating spectacle in the field of sports. Although the finals of the M R De Souza Gold Cup provided many thrilling moments to an excited crowd of hockey fans, it was not devoid of these ugly incidents which bring into relief the unsportsmanship on the part of the players and the team as a whole.

Mainly obstructionist tactics characterised the game of Sikhs, while calmness was the keynote of the Goan play which eventually was largely responsible for the final victory. It is not stickwork alone that places one on a pedestal of power – even more important  is a calm temperament to sport a defeat when otherwise victory seemed almost a certainty.

These are the two characteristics which have earned a high reputation for teams like the Lusitanians in Bombay.  The “Lusies” are known to face defeat  with the same sporting spirit which characterises their victories.

It would appear no useful purpose has been served by inviting overseas in this country, for nothing that is exemplary in those tams has emulated or is being emulated by our local teams; but on the contrary, there seems to be a sustained effort to play the same old dreadful and dirty hockey.

Hardly had the final of the Gold Cup ended, when a gang of bearded hooligans and hoodlums worked up into a frenzy invaded the field and mercilessly beat up umpire Peter Barbossa who later fainted and required first aid. And then, adopting somewhat like the familiar Mau Mau, hit the energetic Secretary of the Kenya Goan Sports Association Sports Secretary Mascarenhas till he bled. Not satisfied with the punishment inflicted for no reason on the Secretary, the hoodlums bashed his child.

This incident delayed the presentation of the Gold Cup by the Mayor of Nairobi who watched the sea of excited humanity surging towards him which was kept back with great difficulty by four unarmed “askaris”. The learned Mayor after presenting miniature trophies to the Sikhs said although Dar had taken the Gold Cup, Nairobi could still wrest it from the winners next year. But this high rhetoric was meaningless to those hooligans who only a little while ago bashed the umpire and the Secretary of the Kenya Goans Sports Association.

It is alleged that the incident was as a result  of a wrong decision on the part of the referee Martin Rodrigues which put the Sikhs at a disadvantage. But it is pertinent to point out that the main attack came from those who had previously in the same tournament had conveniently their failure to poor refereeing by Peter Barbossa.

Apart from the abuse hurled at Martin Rodrigues after he had awarded a penalty bully to the Dar es Salaam Goans, the Sikh players abstained from the skirmish and the frantic assault on Barbosa and Mascarenha.

It is learnt now that the attack was planned. The impetus to the plan was given by the defeat of the Sikhs whose supporters joined the troublemakers.

The Kenya Goan Association must take necessary action against those Sikh players who abused the umpire during the game. It must also, in future, provide adequate protection to deal with hooligans. Umpires and players should not be to such bestial punishment as was meted out to Barbosa and Mascarenhas. In the meantime, the goondas must be brought to task, if repetition of such incidents has to be stopped. On more than one occasion, the Goan sportsmen have had their heads broken by ruffians.

Apart from the incident mentioned, the organisation of the Gold Cup tournament was perfect in every detail and credit in this respect goes to Anthony Mascarenhas, Secretary of the Kenya Goans Sports Association under whose auspices the tournament is run.

The participation of teams from all over
East Africa augurs well for the organisers for the tournament is bound to be the premier one in the this country. The umpiring throughout the tournament was of a very high standard particularly by Barbossa, Rodrigues and Anthony de Souza. As regards the winners of the trophy, it can safely be said that the best team won.