A tribute to Joaquim D'Souza 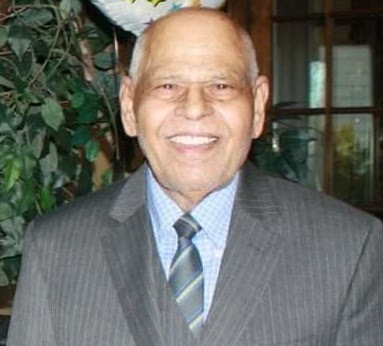 American Poet Anne Sexton – “It doesn’t matter who my father was: it matters who I remember he was”

Joaquim D’Souza ascended to his heavenly father on March 6th 2021; 16 days shy of his 93rd birthday. His soul met his creator with his life-long companion of 62 years, Martha, by his bedside. He was a caring father and father-in-law to Arleen and Tyronne; Everett and Michele; Hayley and Merwyn; and Tansy, even though at times, due to his hard childhood, he struggled to openly show his emotions. His four children had a carefree, well provided young life, blessed by a place we still treasure as our “first home” in North Lavington. He was a loving grandfather to Ralston (Stacey), Kielan (Yujin), Kyle and his lovable Ariella. He now has but one surviving brother, Francis, in Brighton, England and the youngest sister Dolly in Georgia, USA.

Joaquim Victor D’Souza was born in Assagao, Goa on March 22nd 1928 and made the journey to Kenya at the tender age of two with his bold parents Ana and Paulo seeking new frontiers. At 10 years of age he returned with his mother and siblings to India to study, enduring hardships brought on by World War II. His favorite story being, how they had to steal big pumpkins to feed eight hungry mouths with his dad isolated at a train station in the middle of the Kenyan bush. He none the less completed his high school in 1947 at the Jesuit school of St Paul’s in Belgaum. Due to financial limitations he had to forego any further higher learning and with his 6 siblings in tow needing a better quality of life, sought his fortune back in Kenya. His work history included a brief stint in Standard Bank, ten years with a luxury car dealership and then in 1960 he joined The Old Mutual where he worked for 36 years, rising through the ranks by sheer hard work and merit, to retire in 1994 as the Assistant Manager. On retirement his expertize got him re-employed for 3 additional years in the capacity of a consultant. For his many years of service he was awarded a deserving company-paid trip through the European continent.

Joaquim immigrated to the US end 1999 to be closer to the family, especially the grandchildren. In 2008 he went to Portugal, a gift to him and Martha for their 50 years of marriage. It was always their dream to visit Fatima and wonderful friends in Portugal; so on their return, instead of being exhausted they shocked the family saying it was but too short a trip. With daughter Hayley in Australia, the South Pacific also made it to the “to do” list.

He was a gifted athlete and at St. Paul’s held the record for the mile for 3 consecutive years. In Nairobi he dribbled his hockey stick and batted the cricket ball at the club level for the Railway Goan Institute. What competition during the English Premier league as the staunch Manchester United fan had to put up against us Chelsea and Arsenal fans – this all exacerbated during the World Cup.

A keen philatelist, his collection was always, as expected, meticulously stored. He subscribed to the Reader’s Digest magazine and bought their reference books; enticing exploration of diverse knowledge. And of course you had to go through the daily newspapers; now a thing of the past. Neat and methodical were his banking and medical files. And his handwriting was something to behold. If there was one thing to miss in America as a grown-up child, was waking up to his early morning pot-boiled Kenyan coffee brew and multi-ingredient scrambled eggs. Not the master chef; but in his eighties, when the roles reversed, with his wife wheelchair-bound, he was her caretaker-divine and made his own sorpotel at 89.

A man of character and faith; he never missed his Sunday Mass and always attended attired in the proverbial Sunday best. A man always willing to give financially to his fellow man be it his family or children or someone in a faraway land. His first house in Nairobi is now a place of God with nuns praying for his soul and he is referred to as a benefactor of the resident Daughters of St. Anne (ironically St. Anne’s husband was also named Joaquim). Every bit the gentleman, he was always well groomed; this almost to his end. His affable personality was a draw, making him the darling in the crowd – always playing the perfect host, with never a glass or plate awanting.

How do you say goodbye to someone who was your rock? I think it’s when you finally realize that you cannot because so much of him is really now you.

Much love and gratitude

Due to the current restrictions and rehab regulations, there will be a private wake followed by a funeral mass open to all at 12 noon March 11th at St Peter the Apostle, 179 Baldwin Rd, Parsippany, NJ 07054. In lieu of flowers donations may be made to one of dad’s favorite charities – Salesian Missions, 2 LeFevre Ln, New Rochelle, NY 10801. May his soul rest in peace!

For those who are unable to attend and would like to view the funeral mass LIVE, kindly go to

On the site look for LIVE and click the arrow. Select the current stream or if viewing at a later time click on previous broadcasts and select the funeral