A sister's eye witness account of her brother's, his girlfriend's and a friend's death in a car crash 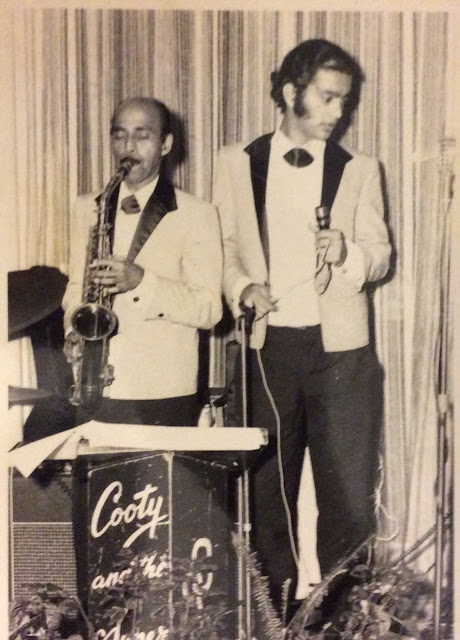 The talented your Deryck D'Mello with the music maestra Cooty, both in Heaven, I would like to think.

THE DAY THAT SHOOK THE GOAN COMMUNITY

WHAT follows is the one of the few eye-witness accounts of a tragedy that robbed the community of three wonderful young people. Those who were close to the three were never the same again. I personally was shattered and, at one stage, I was in no mental or physical condition to attend the funerals. However, thanks to my late wife I did. What follows is an excerpt from a story in Twilight of the Exiles by Maureen D’Mello D’Souza. In memory of the Deryck D’Mello, Avena D’Sa, Samuel (Shafu) Butt. I comfort myself each night convinced that they are in Heaven’s angelic care.

Soon things began to intensify at school, we sat our ‘A’ level exams and then had to wait for three months for the results. I aimed to study Fabric Design at Nairobi University. I never got to do that because just before the results came out, my life and my plans would change dramatically forever.

During the three months, I got a job at a glamorous dress boutique over the Christmas and New Year and then as a receptionist at a dental studio, at the Hilton in Nairobi. The most traumatic day in my life began like this. It was March 4, 1971, and my brother Deryck came home that evening very excited that he and another friend had together bought a car, a Volvo, from a mutual friend. He said that it was in excellent condition and that it had a powerful engine and body. That evening, friends invited a bunch of us to dinner at their home. Excited about the new car, six of us decided to go there in it.

After an enjoyable evening, we set off for home. Deryck and I were in the back, each sitting by the window. In the middle were two friends and the same in the front. We were young, our friend was driving fast and as we were on a dual carriageway, it did not occur to us that it could be dangerous, because the road seemed clear. As we rounded a big bend, however, there was an accident right in front of us that blocked both lanes and, because of a road divider, there was nowhere we could go. We hit the divider and the car overturned several times. We were now on the other side of the road. Cars coming up in the opposite direction, who had a clear path seconds before, were now faced with a terrible situation which resulted in a six-car pile-up.

Six people died on the spot including Deryck and Avena. And Samuel (Shafu) our third friend in the back, who was severely injured, unfortunately, died in hospital two days later. I was in hospital for six weeks with a fractured pelvis and several cuts on the head and left arm.

When I got out of the hospital, I did not want to live in Nairobi anymore and moved away to Dar es Salaam where dad and mum and my sister Christine lived. The accident had changed the lives of many, forever.

The only nice thing that happened to me was that because of my pelvis I was walking with crutches, and that meant that rather than travel by train, I had to take a flight to Dar es Salaam. It was my first ever flight, and I was excited. As luck would have it, I met someone on the plane whom I knew, he worked as an engineer for some airline I think and so as we flew over Kilimanjaro he managed to get the Pilot to invite me into the cabin to get the most stunning view of the mountain from the top with its snow, like icing on a cake, and a few minutes later a view of the exquisite Tanzanian coastline, the white sandy beaches, and the coconut palms down to Dar es Salaam.

With the loss of their only son, my Mum and Dad had suffered a huge blow, and it would take a long time for things to get anywhere near normal again. Dad was nearly 51 and the second in charge of the accounts section of the East African Railways and Harbours. He could have easily carried on, but instead, he decided to retire and move to Goa. Dad had completed 31 years with the same company he had risen step by step to the top of his sector.

We left Tanzania in May 1972 on a beautiful ship, calling at Mombasa, and then on to Goa, in India. Many families boarded the ship at Mombasa, many of them trying to flee from Uganda before the Amin administration got worse and worse and expelled all the Asians with no time to take any of their belongings with them.

I had teenagers of my age on the ship and we had a lot of fun together. We took part in a concert organised for the Captain who threw a cocktail party for all the passengers, and one night he even invited dad, mum and I to his cabin for a drink. It was an enjoyable evening, Dad and mum adapted slowly, but well, to life in Goa. We had brought our VW car with us which was an advantage then and It was with us until this year 2020.

Dad managed to enjoy his retirement for ten years before he sadly left us at the age of 62. Mum is blessed with relatively good health and was independent until two years ago, doing her wonderful cooking for all of us and her great grandchildren. She was 90 on October 14, 2020. As I write this, Mum is peaceful and serene in a home for the aged in her ancestral village in Aldona, Goa. She uses her smart phone very well and keeps in touch with people all over the world. I look back on a whole century and more of the lives of our family members and hope that this little account will serve some younger generations to understand what life was like for us in the nineteen hundred in our marvellous East Africa.