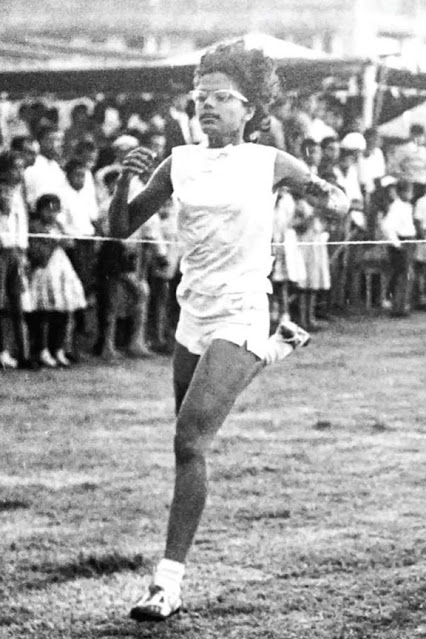 AS The East African Goan community, now spread far and wide across the world, go down memory lane, one cannot help but be struck by the realisation that the Goans unquestionably had raw and innate sporting talent. Hindsight and our experiences of living in new countries, bring this fact into sharp focus. What is astounding is how many individuals of our time achieved great heights in the sporting arena with the minimal of resources, support or leading-edge coaching.

Track & Field and Hockey were my passion.

In the early 1950’s when we lived on the grounds of the Railway Asian Institute my father, Lazarus Fernandes – himself a top sportsman – would have my sisters and me run from the club house to the pavilion and back to the club house. This very basic training led me and my sister, Mitelia, to each win the School Championship (Junior and Open) for four successive years. Together, we did this eight years in succession – an unprecedented and perhaps unbeaten record. We both went on to be champions at both the RGI and GI sports meets.

I could have achieved another unparalleled record – winning both the Junior and Open school championship at the same meet. I had the Junior Championship in the bag and needed just one point to win the Open division as well. Midway through the meet, Father Comerford, the Principal, drew me aside and told me that I was not to hog the limelight by winning all the events. Intimidated, I chose to not run in the final event! It was a turning point decision that I have always regretted. I never told my parents.

Subsequently, I joined the Spartans Track and Field group. Trifa and Nifa DeSouza, Bertha Fernandes and I were four women athletes in a group of several men. We practised regularly at the Railways track on Princess Elizabeth Highway (now Uhuru Hwy). We did not have a dedicated coach and it was the men who coached us as best they could. We had little in the way of basic athletic equipment – everything was light years behind even ten-year-old standards. My best showing was the 220 finals at the Kenya Championship held in Kisumu. My long-held dream was to represent the country at the Olympics but I was born too early for that dream to become reality.

Goan schoolteacher, Mr Stanley DeSouza, took on the challenge of forming the school’s first girls hockey team. With enthusiastic dedication, he succeeded in moulding us into a winning team. Our basic resources were thrown into sharp relief when we played league games at the Kenya High School (KHS). The extent and the quality of their facilities was startling. We were envious but knew our place in the Kenyan compartmentalised society.

It was my mother, Lourdinha, who dragged my sister, Joana Civita, outside of our hockey comfort zone. She talked our Nairobi Goan Housing Estate neighbours, Maggie and Martie Rodrigues, into taking us under their wing. They played for the Ragtimers. Soon our shyness faded and our game vastly improved as we played with the team’s many skilled players. There were also handsome chaps working out with us. The social aspect of Ragtimers – going on picnics, parties, learning the cha cha cha – made for carefree and happy times. Down the road, I became the youngest captain. Playing for the RGI came later and is another great memory. Captain, Nora Braganza, and coaches, Alu Mendonca and (?) Chong, were tireless and generous. The team was at its peak and hard to beat. Later I was proud to captain the side.

Perhaps my most enduring hockey memory was experiencing the highest of highs and the lowest of lows. A surprise letter from the Kenya Women’s Hockey Association inviting me to join the national training squad was a thrill. I was on cloud nine. During weeks of arduous training sessions under Mr. Mahan Singh I was in top form. But at the critical two-day selection trials in Nakuru my game let me down and badly – I was tired and hungry after the long drive and my game was unrecognizable. The damage was done and, notwithstanding my excellent performance during weeks of training, there was no second chance. I was devastated. I was chosen to be the non-travelling reserve and later played for the President’s XI against a visiting South African team. Another of my life’s turning point.

Mostly it is the happy memories of my sprinting and hockey days that are uppermost. Flying down the 100 yards track, totally oblivious of everything around me, and breasting the tape is the best of those wonderful memories.