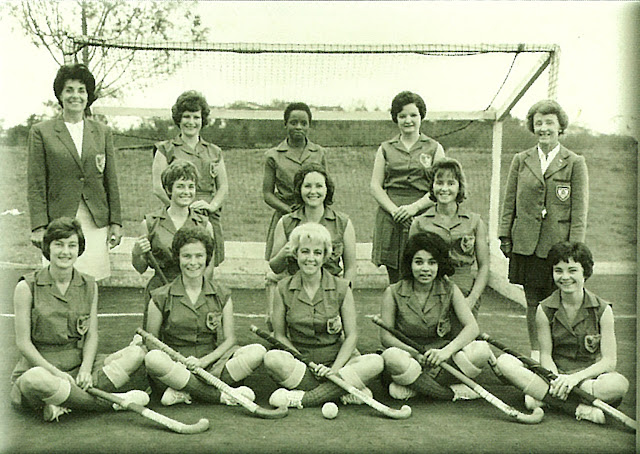 Bertha Fernandes, second from right seated, with the Kenya team

She was Bertha Fernandes, one of the most capped Goan hockey stars.

It was always going to be a match made in sport:

I started playing hockey when I was 16 years old. I first played with Ragtimers and later with the famous Collegians hockey team which was coached by one of the most respected men in hockey, the international hockey umpire Peter Barbosa.

During my time with the Collegians, we played a lot of hockey, took part in the domestic league competition comprising of various hockey teams from different clubs in Nairobi. We also toured several places like Mombasa, Tanga, Dar-es- Salaam, Zanzibar and were victorious in all these places. I did not play hockey at school, as St. Teresa’s Girl’s School did not have the facilities, but I did take part in all track and field events. I also played Netball and competed with different schools in Nairobi.

Fortunately, I excelled in all of the above.

I joined the Spartans Athletics Club in Nairobi, but stayed with them for a short time because I had hockey on my mind. After Collegians finished as a team, I played for the once whites-only Impala Club for a while. I would be about 19 years old when I was selected to represent Kenya. The father of hockey coaching in Kenya, the great Mahan Singh, was our coach and he took my game to another level. Yes, I was the most capped Goan player in the Kenya Team. I started playing right wing, then right inner, and sometimes centre forward. I played against All England, South African Proteas, and Uganda (several times). I got along with all my teammates.

I have lots of good memories of my hockey career. One was when I was selected to play against the All England Women’s hockey team. My mother, brothers and sisters, fans and friends, all turned up at the Nairobi City Park Stadium to cheer me on.

I remember the important build-up to the game, the warm-up, the cheers, the vision of scoring … Although I played a number of internationals against Uganda, this was something special. Playing for your country was awesome. Hockey gave me something to be a part of where I felt I belonged. It allowed me to grow closer with people and has introduced me to more friends. I remember the joys of winning and the heartbreak of losing.

My favourite Goan male player will always be none other than the dashing centre forward for Kenya, the one and only Egbert Fernandes, later my husband.