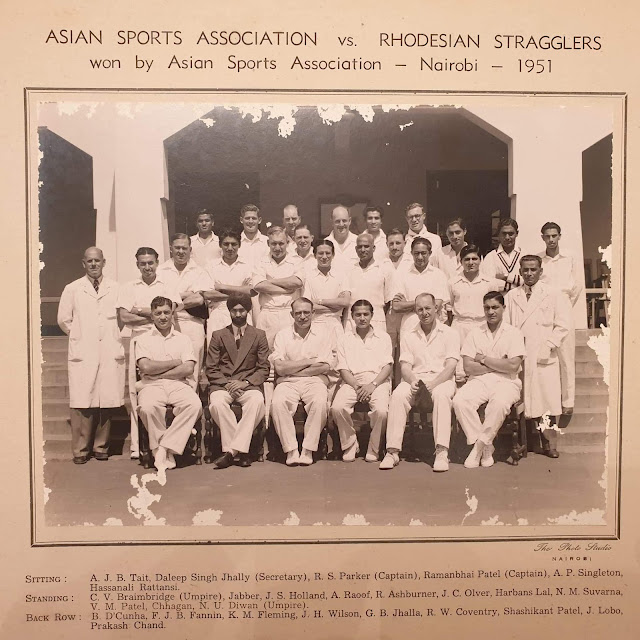 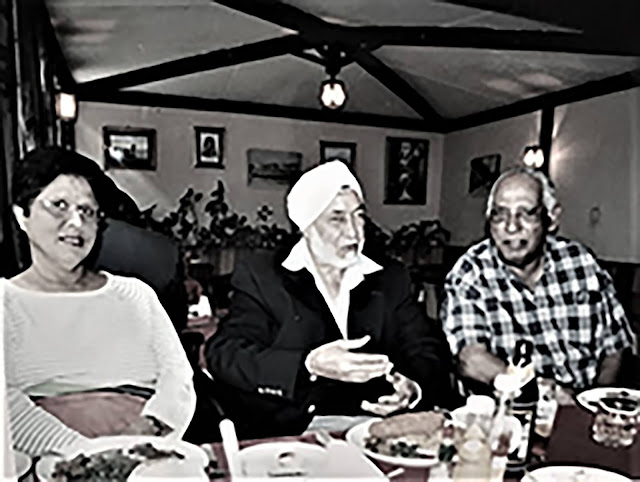 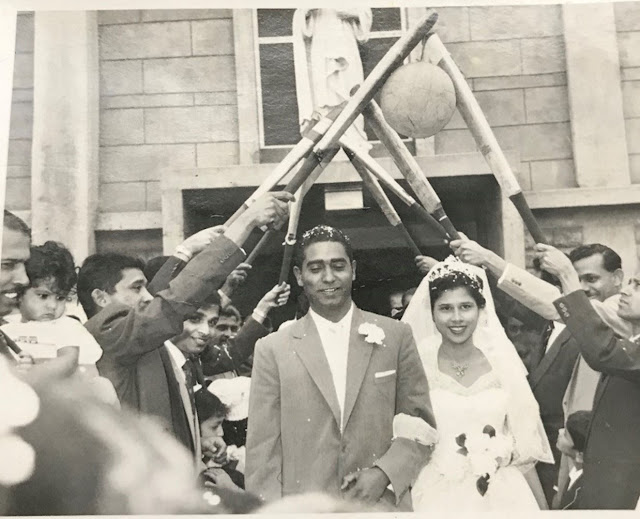 Our Wedding in 1959, Nairobi Kenya, with well-wishers forming the bridal arch with cricket bats and soccer balls. 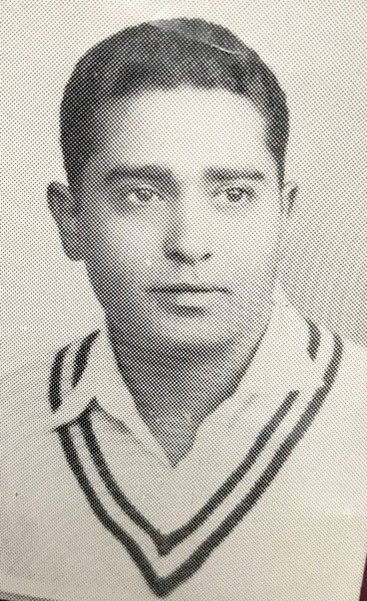 The Early Years – My family’s move to Kenya

It was my father’s brother-in-law S.R. Rodrigues who was the first pioneer from our family who ventured out of Goa and crossed the Indian Ocean on a dhow with the Arab traders to Mombasa in 1895. Later he was instrumental in convincing my father Evaristo Lobo, that he could get him a well-paid Government job in Kenya. My father agreed and came over on a steamer in 1911 and began working. A few years later, my father got very sick and returned to Goa. When he had recovered, we were were still in Goa. Typically, a proposal of marriage from my mother’s family Benjamin Mendes from Aldona for their daughter Maria Mendes. My father married my mother in 1918 and returned to Kenya. My siblings were born shortly after Joseph 1919, Victor 1921, Francis 1923, Eulalia 1925 and Clara 1929. I was the 5th child born on December 27 1927. We grew up in Ngara in the Government Quarters built by the British rulers for Goan and Indian government staff.  My three older brothers were sent to study at St. Stanislaus’ Bombay and were active sports players at school, while my sisters and I attended Dr Ribeiro Goan School (DRGS) in Parklands. It was at this school where my love of all sports began.

Each day at our half-hour break, we would race out of the class to grab the cricket bat. We soon realised only the batter stayed at the crease until he was bowled.  Soon we started to play actual matches, 11 players on each side. Some of the names I remember are Philip Gracias, Alex and Rui Rodrigues, Willie Paes, Marcus Braganza, Monty D’Sa, Alan D’Cunha and myself. Incredibly our first match lasted three months, but in those three months, we continued to get better.

Our passion for the game continued even after the bell rang to end our day at school. As many of my classmates also lived in my neighbourhood, we would race home and play daily from 4-6 in the evening. The neighbourhood boys included Maurice and Philip Gracias, Bartu and Dennis Noronha, Marcus and Henry Braganza, Alu Mendonca and Silu Fernandes.

Building on the newfound confidence, we decided to play our first test match against the Government Indian School (GIS) on matting. It was a remarkable result because we not only won, but I also scored my first century in the game. Boosted by this win we went on to play our next match against the Prince of Wales school and thanks to a fine inning by Monty D’Sa of 50 runs with good support from Alan D’Cunha of 30 runs, we won that game too. Another impressive victory of my own, for DRGS, was when I scored two centuries, against Mombasa Goan School (110) and Allidini Visram School (105).

My uncle Jack Mendes (my mother’s brother), who captained the RGI on weekends would often take me, then just a young boy of 11 years to watch the games. Being the captain of the team and my uncle, if a player did not show up, would ask me to stand in for that player. This opportunity tremendously improved my game as I played with young men who were more experienced in the game than I was.

Maurice Gracias was a brilliant cricketer who dominated on the RGI side for several years. He was educated at the Government Indian School and was the first Goan to represent the Asians against the Europeans. He retired from cricket two seasons after I joined. While on the team I scored a few centuries most notably against the Aga Khan Club where I scored 130 runs and Nairobi Club where I scored 133 runs.

The Cricket season in Nairobi started in October and ended in March. Every Sunday In those six months, we enjoyed many matches between clubs. The sports secretaries of each club would meet and draw up fixtures for the home and away games.

There were 10 Asian clubs:

There were 7 European clubs:

In the 1950s, we made a trip to Moshi to play against the Tanganyika Twigas, a mostly European side. Blaize DaCunha the great Kenyan spin bowler dominated that game with an inning of 125 runs. The scoreboard read: -

In the early 1960s, RGI was invited to participate in the Asian Sports Association Knockout Tournament and had a sensational first match where we beat the Patel Club, then beat the Kathiawar Club in the second match. We went on to meet the Coast Gymkhana side in the quarter-finals at the Sikh Union Club grounds. We batted first and only scored 138 runs, but with great determination, we bowled out the Coast Gymkhana for 125 runs to win the match. Donald Gonsalves bowled well and most of the Coast team were out due to the brilliant catches by the RG I team. We then went on to face the Muslim Club in the semi-finals. We batted first and only managed 90 runs for 8. Then came Cecil Fonseca our 9the player who scored a sensational 95 runs, hitting four sixes and we were all out for 210 runs. In this match, Zulfikar Ali on the Muslim side was in fine form and bowled well. The Muslim side began batting and, at first, it seemed like they were in trouble 110 runs for 9. Blaze D’Cunha was bowling well, but our captain began to panic and changed him after one over. Then came the Muslim side’s Basharat Hassan and Mubarak Ali and led the Muslim Club to victory. A chance at history with a Goan victory was denied yet again.

It was always the practice of each sports team to elect their captain. However, the rules suddenly changed one year, when the Hockey and Badminton ladies and men’s teams took part in the voting process and voted in the new Cricket captain for our team. It was an unprecedented and unacceptable practice which led to a few of us (non-railway workers “associate members” who had no voice in the management of the club practices) splitting off from the RG I side. At this time, Dr Shashi Patel a Railway doctor asked a few of us to join the Railway European Club, which we did for two seasons, as Kenya’s independence was looming, players were leaving the country and the clubs were shutting down. We then moved our game to the Wanderers Cricket Club, a beautiful setting at the beginning of the Kiambu Road, where we played for three seasons and they too shut down. The saddest part was to see our RGI. Club House and grounds demolished to make way for a boarding Government school complex.

On my first local leave from work, I was asked to play for the Goan Institute (GI) against the Nazi Moja Club in Mombasa. Playing at the coast with an altitude of 57 feet above sea level with humidity was difficult at first. I only scored 50 runs. My host Armand D’Souza pulled me aside and gave me some profound advice that stayed with me throughout my career, “getting to 50 is the hard part, but once you score 50 you are well set, so just go for a 100”. On my next visit to Mombasa, a Saturday game playing again for the GI against Mombasa Club, my partner was Joe Fernandes, I remembered Armand’s advice and went for the century.

In the late 1940s, I played for the Nairobi Asian Team touring Zanzibar and Dar-es-Salaam. It was a great game which we won. In the 1950s I was selected to play against the South African Coloured Team which was captained by the famous Basil D’Oliveira in Nakuru at the Rift Valley Sports Club and also played against the Rhodesian Team on the Sikh Union ground. In the 1960s, I played regularly for Asians for season-ending much sought after match against Europeans.

The Europeans lead 11 to Asians 1. We turned that game on its head and beat the Europeans. The Asians dominated, won one match after the other, equalizing the series with the last match ending in a record win for the Asians 450 runs with Akhil Lakhani’s 230 runs n.o. and Chandrakant Patel’s 220 runs n.o.

In the 1950s, Jasmer Singh a great cricketer and my close friend, together with Maurice Wright, John MacFarlane and myself formed the Kenya Commercial League for teams which included government offices, banks and companies in the private sector. The games would be played off-season, from July to October. The competitive sportsmanship in this league was exceedingly high and most enjoyable and it drew top players from the Asian clubs.

I captained the Ministry of Works (MOW) side and in our very first season I scored 5 centuries in a row, four n.o. and held the record in the league. A game worth mentioning was when Luis D’Souza playing for Gailey & Roberts hit 11 sixes in a match against MOW played on the Patel Club grounds. Other notable great names in cricket in those days included Ramanbhai Patel, Zulfikar Ali, Jawahir Shah, Akhil Lakhani and Chandrakant Patel.

Shortly after my record game in July of that year, the next big upcoming match was Kenya vs Tanzania which would be in August of that year. The selection committee decided to have the scouting selection matches for 17 players at the Patel Club ground. By the time it was my turn to bat, it was about 6 p.m., the sun had begun to set and the light was diminishing. Throughout my cricket career, my best stroke was on the offside. The bowler was Dr Ranjit Singh, a known fast bowler with a new ball. I defended my wicket but unfortunately got trapped on the pads lbw. I was told later that day, that I could not play off-break bowling, and therefore was not selected to represent Kenya.

In 1959, I got married to Maura Lobo from Kampala Uganda. We started our family in the early 1960s-1970s with three sons; John, James and Jerry and three daughters; Mary Ann, Melita and Michelle. My cricket career continued after independence and throughout my children’s young years into the mid-1970s where I played seasonal games for the Goan Institute (GI) side with players like Sunil Sarkar, Yunis Cockar and Alvito Rego. I finally passed on my cricket bat to my son Jerry and even some of our friend’s sons hoping they would take this great game into the future with them.

Having left Kenya in December 1993 and now a citizen of Canada residing in Oakville, Ontario, I still love to watch my children and grandsons pick up the cricket bat and play a match. At the age of 92, my great joy is always when they ask me to join them to bat.