The Queen of Track and Field 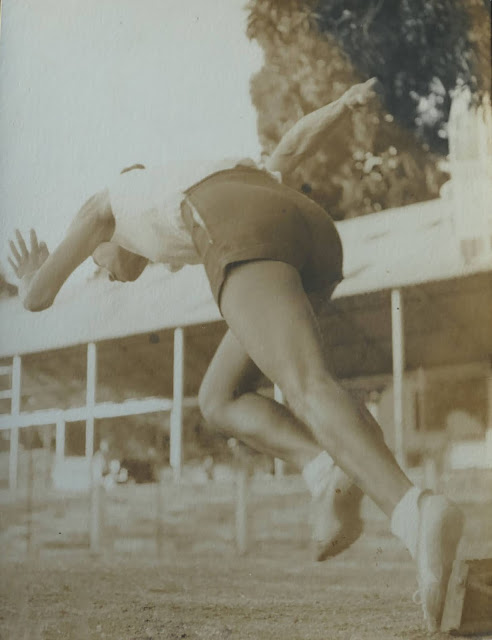 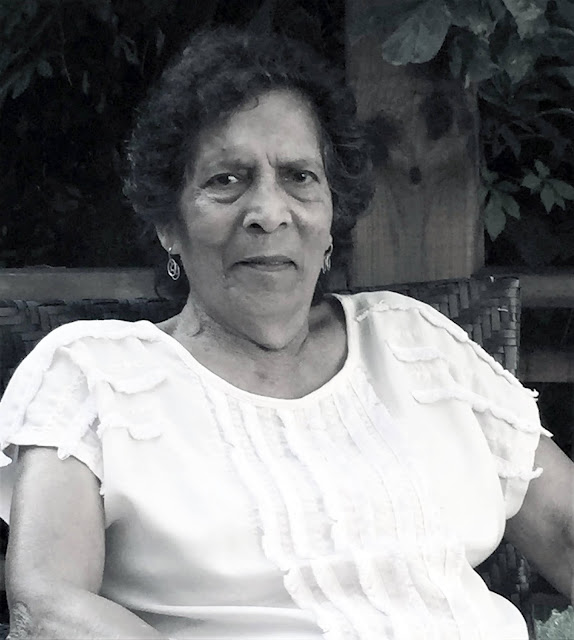 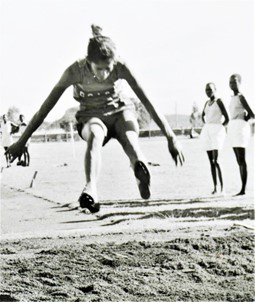 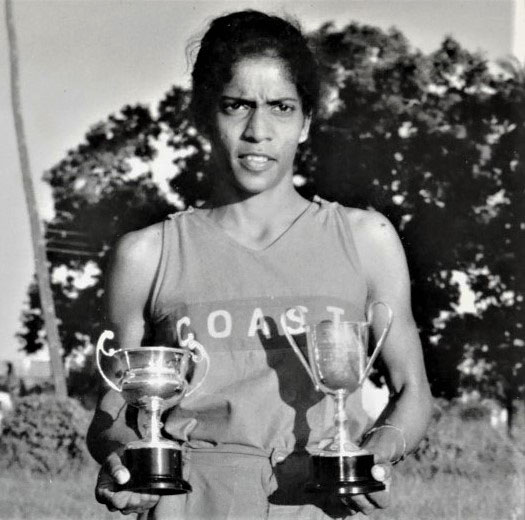 The years between 1950 and 1966 were the golden years of Goan track and field in East Africa, especially in the sprinting and middle-distance events. The Kenyan coastal capital of Mombasa produced the best Goan sprinters of all time, led by the late 1962 Commonwealth Games sprint double gold medalist, Seraphino Antao. These fleet-footed Goans included Avila Laura Ramos, Albert Castanha (the man who should have gone to the Games but faltered in the trials), Winnie D’Souza Singh, Joe Faria, Juanita Noronha, Pascal Antao, Alcino Rodrigues, Jack Fernandes and a few others. They were all potential medal winners.

But this story is about one of the most determined athletes of her time: the extremely shy and humble Meldrita Laurente Viegas. She was born in Mombasa on January 16, 1939, and was the second of four children. Greta, her older sister lives in Goa. Her younger brother, Stafford Laurente, lives in Brantford, Ontario, Canada, and the baby of the family, Lauriette D’Souza-Lobo, lives in Toronto. Growing up, Meldrita often felt like the middle child who had to excel elsewhere to get the attention her siblings enjoyed.

Her father John Delphin Laurente was a civil servant with the British Colonial Civil Service (Revenue Department). At the time, the British Government relied on an army of Goan civil servants, sent to virtually every corner of the country, to keep things well-ordered. As a result, Meldrita’s family lived in Meru (Central Kenya), Eldoret (Rift Valley) and Kilifi (the Coast) before finally settling in Mombasa when Meldrita was 12 years old.

Her mother, Maude, always tried to minimize the impact of this nomadic life on the children. She sent the kids by ship to Karachi, Pakistan, to live with her parents for two years. A young Meldrita remembers hearing bells for the Angelus from the local church and playing bones and ball (a game featuring pig bones and a tennis ball) on the stairs of her maternal grandmother’s home.

Maude also sent the kids to live with her sister Charlotte and her family in Nairobi, while her husband was working in Eldoret, a Kenyan frontier town founded by South African Boer migrants. While in Nairobi, Meldrita went to the Dr. Ribeiro Goan School in Parklands for two years. Her aunt Charlotte was very strict and had a structured routine for her three children and their three cousins. She taught the children how to share. Table manners were high on the priority list. Meldrita missed her parents very much. Her frequent requests to return home finally wore her aunt down, and she was sent to Eldoret to be reunited with her parents. The persistence and determination she showed at a young age would serve her well as she matured.

The family finally ended up in Mombasa, which was much smaller than Nairobi but larger than other places the Laurente family had called home. When they moved to Mombasa, there was a natural period of adjustment. Meldrita went to the Goan (Sacred Heart) School. She found it difficult to make friends as most of her peers had their own social circles, which were largely closed to newcomers. The Goan community there was plagued by the old prejudices of the caste system.

Meldrita was not the kind of youngster who would let these sorts of things affect her. She played rounders, netball, and badminton, and participated in track and field in an attempt to fit in.  Interschool participation in track and field brought her great success. She felt a sense of belonging with her track and field family. Later, she continued training and competing while she attended teachers’ college and after her teaching career began at the Goan School at the age of 20.

Maude was a huge supporter and was always present when Meldrita ran at the Mombasa Municipal Stadium. John did his part by keeping the evil eye at bay and relishing in her accomplishments. After most meets, John would take Meldrita up to the terrace of their apartment building to take out dishth (evil eye). This ritual involved circling dried red chillies and alum around her head and burning the chillies in a charcoal fire (shigri) thereafter. The burned alum was thought to reveal the faces of those casting the evil eye. The stench of burning chillies is pretty awful. But that was the tradition in those days.

Initially, Meldrita trained at the Goan School. Later she was a member of the Coast Teachers’ Training College team. Mr. Loadman, the principal, took a keen interest in her. After Teachers’ Training College she returned to the Goan School to teach. She coached the track and field team at the school and selected three girls to run the 4 x 110 yards relay at the Coast Championships with her. She trained with Ray Batchelor at the Mombasa Municipal Stadium. (Ray Batchelor revolutionized Goan sport at the Coast. He was perhaps the only one (or one of a very few) who broke the Colonial colour bar by working and socializing with Goans. He was also the man who coached Antao to gold.) Among those who trained with Meldrita under Batchelor were Seraphino Antao (sprints, hurdles), Albert Castanha (sprints, hurdles, high jump), Alcino Rodrigues (330 yards, 440 yards) and Joe Faria (sprints), Bruno D’Souza, Fathiya Hinaway (hurdler), Ann Sanford (relay team) and Irina Ribitzski.

Meldrita has fond memories of Ray. After light jogs and warm-up exercises, he would ask her to run up the stadium steps with her knees as high as she could get them. He told her that this would help improve the length of her strides. She remembers him giving the athletes tins of Milo. He insisted that they eat two hours before a meet.

When Meldrita first competed against Winnie D’Souza Singh, Winnie defeated her in the 100-yard dash in a close finish. That was a turning point for Meldrita.  Winnie hadn’t broken the Kenya record in the race, so Meldrita set her eyes on the record. It motivated her to train intensely. She had become accustomed to winning and never wanted to be second best again. She never lost to Winnie again. Meldrita broke the Kenya record at the Kenya Championships in Kisumu and the record (11.4 secs) stood for many years. The success she enjoyed fueled her training, and she remained the champion for a number of years. The Queen of Track and Field had been crowned.

Meldrita saw success in other events as well. She broke the Kenya record for long jump at the Coast Championships and held the record of 17’ 5

Meldrita was recognized for all her contributions to track field and field when she was named the female Athlete of the Century at the centenary celebrations of the Mombasa Institute in 2001.

Every win was followed by “a feed”, a celebration at Blue Room in Mombasa that would always include falooda and samosas.

Meldrita stopped participating in track and field after she got married. Her husband, Menino Viegas, worked for the Kenya Railways and was based in Voi (relatively close to Mombasa) for many years. The family returned to Mombasa in the late 1970s. Meldrita played field hockey with the Mombasa Institute, and she encouraged her four children to play as well.

Meldrita, Menino and their four children moved to Canada in 1983 and experienced a huge culture shock. Meldrita, who was very involved in the lives of her children, had to come to terms with leaving the children at 7 am and not seeing them again until 5 pm. Not having any house help was also a huge adjustment, as it made the day longer and there was less time for leisure.  Meldrita and Menino had left all their friends behind, and they both found it difficult to find employment. Getting around the city required making allowances for significant travel time. However, in time, things improved tremendously. Meldrita and Menino found work, the kids thrived and ultimately went on to university. There was much to cherish.

Meldrita participated in the GOA (Goan Overseas Association) Sports in the first summer after her arrival in Canada. She finished second in the 100 meters. She had to take pain killers to be able to participate as she was experiencing right hip pain. The pain eventually overcame her desire to compete. Furthermore, she didn’t like being second best! Three hip surgeries have sidelined her completely. She now officiates at track and field meets.

Meldrita and Menino are presently enjoying retirement and are very involved in the lives of their nine grandchildren. They have wonderful memories of lives well-lived.