Days gone by in Kenya 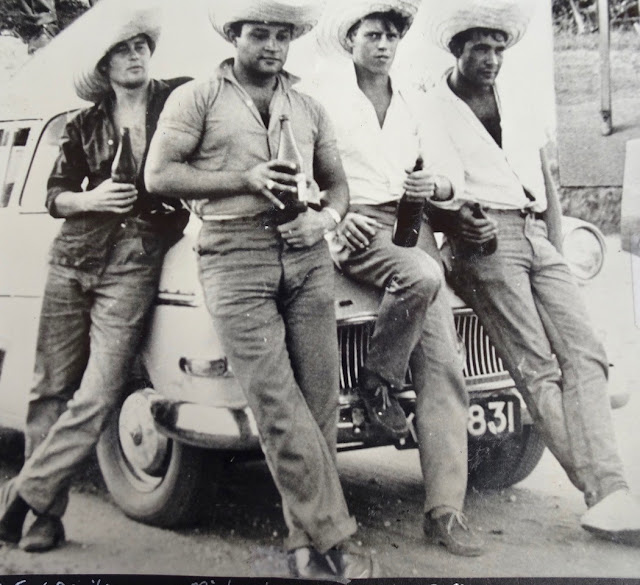 My old mate, Mick Parry, from our days together on the Daily Nation, (Many of you will  remember him also from his days at the East African Standard, especially his coverage of the East African Safari and other stories) has asked me to share this memory:

A look back in time… the Mombasa road sometime in 1963 and four young men are heading back to Nairobi. Probably the beer we drank was warm – we did not know much about ice coldies back then. Somewhere along the memorable track that was the link between capital to coast, we stopped for a pee break and, as someone with a camera, I propped the wonky Waltzflex in a position to capture us all. Call us Kenya cowboys but the hats from some Mombasa market give us a Mexican look!

Almost 60 years have passed since that moment but, thanks to the magic of film, it can be looked at again and can recapture memories of youth. Sadly, I am the only survivor. That’s me on the left. My Kenya mates have all passed on – Jeff and Vic Baronet and Willie Alexander are gone, but only in spirit. This week marks the anniversary of Jeff’s death – a suitable time to remember old friends.

Had he lived, and not died in 1997, Jeff would have been 81, which seems rather strange today. He is best remembered by reversing those numbers – to the good-looking teenager of 18. Jeff lived his best years as a young man and it is good to remember him as wild and dashing, fun-loving and kind, as ready for a scrap, as he was for a drink. Those heady days would soon be calmed for me with marriage and, with Kenya’s independence, most school mates moved from Kenya.

I caught up with Jeff in Shropshire in 1985 and had a great night with him and brothers Charlie and Dennis. He drove me to the station the next morning and it was the last I saw of him. But the bond was there. Jeff and I were good mates, Willie befriended me at school at the Prince of Wales and was best man at my wedding. Vic was, let’s face it, Vic.

Those who knew him, have their own stories! Ironically, Vic was also a survivor and while Jeff died early, and Willie within the last eight years, the oldest of the Baronet brothers lived on until he was almost 80 when he died, in Poole in 2015. But it is back to those wonderful days of Kenya in the 50s and 60s that we look back today. Hell, we left school and straight into a job. We had money and friends and we absolutely knew we would live forever. Yes, an era long gone but cherished.

It is only now, six decades on, that we realise that time waits for no man or woman.  But who is complaining? We had a tremendous time and with friends like these, remembered here, the memories live on.