Due to Covid protocols we have to have the funeral streamed online.  below is the link
https://www.youtube.com/channel/UChKzZ7fMVPTPUJuF72b2oOA
This will be available from 11;00 UKT, failing that please search on YouTube   ‘St Anthony’s of Padua, Edgware - live stream’.
Followed by a private service at Breakspear Crematorium, Ruislip.
Thelma and family would like to thank everyone for their prayers and messages of sympathy at this difficult time. Cresent would have been touched and overwhelmed by the love and support shown. In lieu of sending flowers, please offer a Mass for the soul of Cresenti Fernandes at your local church or please make a donation to the Goan Welfare Society in Nairobi (via Facebook). Condolences to: d.fernandes@ntlworld.com 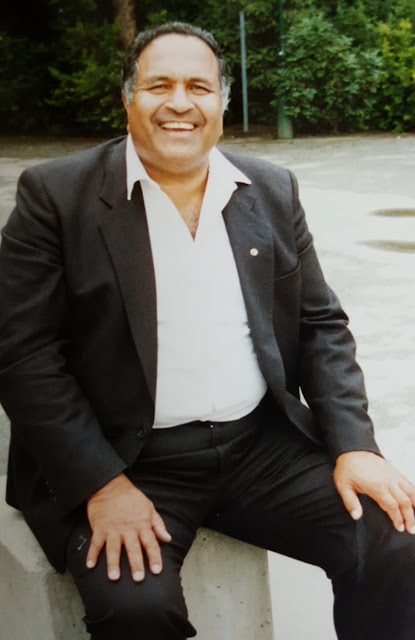 Cresenti Florence Daniel Fernandes passed away peacefully on Friday 31st July in Harrow, UK, in his 85th year, with family at his side. He was the loving and devoted husband of Thelma, devoted father of Caroline (Richard), and sons: late Valentino, Douglas (Idoia) and Christopher. He was also the cherished grandfather of Nerea, Monica and Alex. He is predeceased by his siblings Elias, Rita Gracias, Theo, Moses, Lucy and Joe and survived by brother Thomas.

Cresent was born in Nairobi in 1935, to parents Bella and Martin.
Despite a difficult start in life, his father passing away when he was 2 and 1/2 years old, and thanks mainly to his older siblings, Cresent managed to succeed with distinction in his professional and personal life. Part of his success was his partnership with Thelma who he married at Holy Family Cathedral in Nairobi in 1962.

He started his professional career as a life insurance adviser with Old Mutual Insurance Company in Kenya in 1951, where he stayed until 1976, regularly achieving top producer status of new business. His success continued with American Life Insurance Company (ALICO), also in Kenya. On coming to England in1983, Cresent joined ALICO’s Agency 237 in Wembley, the following year. His consistently high production of quality business resulted in a Life Membership of the Executive Club, as well as Conventions in Portugal, Amsterdam, Rio de Janeiro, Madrid, Monte Carlo, Vienna, Tenerife, Paris and on a cruise around the Caribbean. He became a member of the “Million Dollar Round Table”. When asked why he was successful, he said a great deal of his new business came from satisfying the needs of existing clients.

In the early 1990s, he established himself as an Independent Financial Adviser. His professional advice, which extended to those beyond the Goan community, enabled many people to purchase their first homes and establish their financial security. His exceptional persistency ratio indicated just how much confidence his clients had in his advice and the products he offered them.

In his personal life, Cresent was a keen sportsman and a very sociable man – this combination led to his active participation in the life of the Railway Goan Institute (RGI) and the Goan Institute (Gi) in Nairobi. He was President of the Gi in 1971-72 and Chairman in 1977-78. He led the Gi’s 75th-anniversary celebrations committee in 1980 at the Kenyatta Conference Centre. During his term as President, he raised sponsorship for the renovations to the bar and kitchenette area and the building of two squash courts, which was a new sports facility for the club.

In his youth, he took part in all sports, his two favourite ones being field athletics and hockey. He was a founder member of the Spartan Athletic Team, the forerunner of all the track and field clubs in Kenya, and excelled at shot put. In field hockey, his team won the Gold Cup tournament (A photograph of this hangs in the Gi today). He was Sportsman Of The Year in 1974. He was also on the Kenyan Billiards Society committee and brought well-known players of the day to Kenya to compete. When not on the sports fields, he enjoyed playing cards, Trook and Rummy.

After retiring from active team sports, Cresent was recruited to be the General Secretary of the Kenya Goan Sports Association, a body representing all Goan sporting clubs in Kenya. They were entrusted by the donor, to organise the prestigious M. R. de Souza ‘Gold Cup’ Field Hockey tournament in Nairobi, which attracted many of the top field hockey teams in East Africa. His organising skills raised the profile of this tournament, which became internationally recognised as a premier annual event in Kenya’s sporting calendar and contributed vastly to the improvement and interest in the sport.

As a pillar of the Goan community, he was selected by the British High Commission to represent the Goans in Nairobi, where he assisted many people with their passport applications for emigrating to the UK.

In 2004, with the collaboration of Ayres Fernandes, Dorothy DaCosta, Norma Menezes Rahim, Eunice Barros and Tony Joe, Cresent organised the first ex-Catholic Parochial and St Teresa’s student reunion. This event grew in popularity with the 2017 event attended by ex-students from overseas.

He was especially proud of his children and grandchildren and will be greatly missed by them and by all in the community which he served.

He was a very popular, affable, down-to-earth, but larger than life personality. He will be best remembered for his generosity of heart and his willingness to help anyone in need. Due to him having the rarest blood type, he donated blood regularly to the local hospital, which would also contact him in an emergency. This underlined his selfless personality. He was a big man with a big heart and the epitome of a socialite – anything for a party – from organising a small get-together at the Regency Club in Queensbury/extended family picnics/dinner parties/larger events at home to parties at the office, where partners and their children were also invited. He was in his element organising events, but more importantly, loved seeing people enjoying themselves. He would always say, ‘Have one for the road’ before you left an occasion. Please do so in his honour.

In lieu of flowers, please offer a Mass for the soul of Cresent Fernandes at your local church or make a donation to the Goan Welfare Society Nairobi.

Condolence messages can be sent to d.fernandes@ntlworld.com

May his soul rest in eternal peace.