THE MURDER OF DAG HAMMARSKJOLD, UN SECRETARY-GENERAL IN 1961

SHORTLY after midnight on September 18, 1961, the world was stunned by the news that a chartered DC-6 aircraft carrying the UN Secretary-General Dag Hammarskjold (only the second man to hold the post at the time) had crashed near Ndola, then Northern Rhodesia, Zambia today. Fourteen other people including other UN employees also lost their lives. Hammarskjold was on a peace-keeping machine in the newly independent Congo. At first pilot error was blamed but it was not long before people were talking about foul play. That is the way it stood until last year when The Guardian scored a great exclusive in finding the man who was responsible for the crash. A Belgian pilot Jan van Risseghem was identified as the man who shot down DC-6. He was never brought to justice, he died before that.

ONE of the first people at the scene where bits of the DC-6 had come down all over the place was Adrian Begg. At the time he was a policeman and later turned his skills to journalism. We worked at The Nation in Nairobi. Like so many people at the paper, he was a delightful chap. I tracked him down to an old folks’ home in Victoria but have not been able to find any more about him. Below is his report on the horrific crash site scene: 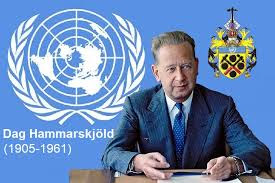 It began as a normal, quiet Sunday shift at Ndola’s central police station, where I had been stationed as a young assistant inspector since completing my training six months earlier – but it soon became obvious there was something big on the go. Officers were being called in from home, and in the early afternoon I was sent with a squad of other officers to secure Ndola Airport and put it in security lockdown in readiness for VIP arrivals. The word quickly spread among us that Dag Hammarskjöld was expected. 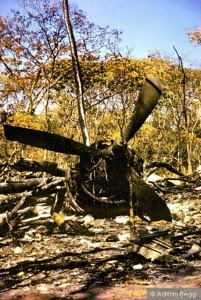 A twisted propellor and the charred remains of an engine. Investigators were able to deduce that the plane was operating under normal approach power when it crashed.

My job was to secure the airport car park, outside the perimeter fence, and at one point I was ordered to stop the waiting media posse from following Katanga’s rebel leader Moise Tshombe, who was being taken to a nearby government residence to await Hammarskjöld’s arrival. As Tshombe’s car swept past I used the simple tactic of driving a police Land Rover across the road, forming an effective blockade which brought the media convoy to a screeching halt. It wasn’t a popular move – a couple of the journalists were mates of mine.

It was a long, boring wait. Nobody seemed to have any idea what time Hammarskjöld was due, and very little information was filtering through to those of us on the ground. A plane landed we thought must be his but we learned later that it was the British politician, Lord Lansdowne, who had also come from Leopoldville.

Then, around midnight local time, another plane arrived over the airport. From where I was standing near the boundary fence, parallel with the runway, it was low enough to see the cabin and navigation lights, all of which were on. It headed away towards the west. Sometime later the runway lights were turned off and a senior officer, Supt. Bob Read if memory serves me correctly, came out of the airport building to tell the police on duty outside that we could stand down. We asked him why the plane hadn’t landed and he just shrugged and said that apparently Hammarskjöld had changed his mind and gone elsewhere which, we learned later, was the official line set by Lord Alport, the British High Commissioner, who had taken charge of the arrangements that day.

I went back to Ndola Central police station to knock off, and before going home for the night a few of us were sitting around in the control room drinking coffee and chatting about the day’s events (or non-events, in the case of Hammarskjöld’s arrival). Marius van Wyk, who had been on security duty at the house where Tshombe was staying, arrived somewhat excited about what he had seen – a bright flash that lit up the sky soon after Hammarskjöld’s plane flew over. This started us speculating that something had happened to the plane. 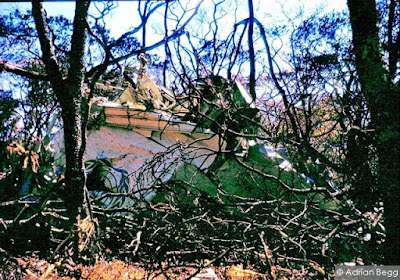 A United Nations logo adorns one of the few recognisable pieces of wreckage. The DC6 was painted in its new white livery only weeks before the fatal crash when it was bought by the Swedish company Transair for charter to the UN for use in its Congo mission.

Marius was sufficiently convincing for me to phone the airport to report what he had seen. (Why I got the job of making the call, I’m not sure. Probably because I was nearest the phone). When I failed to get through, another officer, Keith Pennock, and I drove to the airport which was then in darkness and apparently deserted (it was after 3am). We went to the control tower, which was open, and found the radio operator asleep. We woke him, told him of our concerns, and he said we should tell John Williams, the airport manager, who had just returned from an overseas holiday and was staying at the Rhodes Hotel in Ndola. We rang the hotel but got no answer, so Pennock and I then drove there. Williams wasn’t overjoyed at being woken up and I still recall his exact words when we told him what Marius had seen, and our concern that this might mean the plane had crashed: “That just doesn’t happen. VIP planes don’t crash.” He told us nothing could be done in the middle of the night and there would be no point ordering an air search before first light.

Did Williams know more than he was letting on that night? I don’t think so. Obviously, he was irritable at being roused from his bed by two very junior police officers, but my memory is of a man grappling with a situation that was spiralling out of his control. I believe he genuinely wanted to believe, as he told Keith Pennock and me, that the plane would turn up safely on the ground somewhere in the morning.

Because we weren’t happy about Williams’ apparent lack of concern, I phoned Mufulira police and suggested they send out a road patrol to search in the area Marius had indicated. Then we phoned one of our senior officers to report developments and to get his permission for Ndola police also to send out a road patrol. Between them, the patrols would cover the road between Ndola and Mufulira and hopefully, might be able to spot burning wreckage.

(All three of us were very junior officers. I was 20, Keith, as I recall, was 21, and Marius would have been about 22, so we were taking quite a lot on ourselves in going against the advice of an experienced airport manager that there was no cause for concern).

It is to my eternal regret that our patrols failed to find the crash site that night as we might have been able to save the life of Harold Julien, who was still alive at that time, and perhaps even Hammarskjöld himself, who according to some sources, may have survived for a short time after the crash. 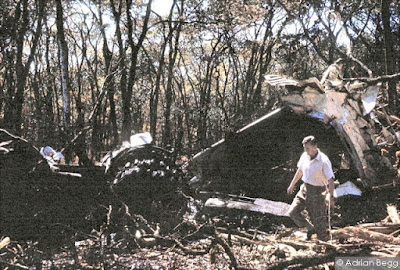 A searcher picks his way through the wreckage, which was strewn over a wide area.

On Tuesday, September 19, the day after the discovery of the plane, I volunteered to assist the team working on the ongoing search of the wreckage and took a number of photographs of the devastation using Kodachrome 35mm slide film (these images have since been digitised). While I was searching I found a body, believed to be that of the Swedish security guard Pvt. Per Persson. The bodies of the other victims had been removed the previous day, and because of initial confusion about the number of people on board, Persson’s body, well hidden beneath the debris, had been overlooked.

The body had what appeared to be bullet wounds and my recollection is there was a 9mm sub-machinegun in the wreckage nearby, which we surmised was the cause. He could well have been holding the weapon on his lap when the plane crashed or maybe even have been loading it preparatory to landing in what he would probably have considered to be alien territory (there was no reason why the gun should have been kept loaded during the flight, but obviously he would have wanted to be prepared for anything once they landed).

The soldiers’ wounds remain one of the mysteries of the crash, and like so many other questions that are still being asked, we don’t know all the answers even after fifty years.

My view? As someone who for many years was a journalist and who, during a brief career as a policeman had a very minor role on the fringes of this tragic and momentous event, I’m tempted by the theory of Ockham’s Razor. This tells us that when there are many competing hypotheses, the simplest explanation is usually the most reliable.