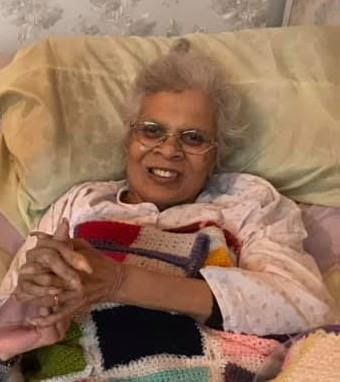 Rosalind was born in the coastal village of Anjuna in Goa on the Arabian Sea. Her early years living and growing up in Catholic Goa and the famous Anjuna beach with its ‘laid back’ atmosphere certainly influenced Rosalind’s appetite for strong values, a good life of traditional cuisine, fun, and adventure. Rosalind was the only girl amidst her brothers. With her violinist father’s support of the Choir at St Michael’s Church, Rosalind grew her own talent with singing both at church and social gatherings. With her mother, she enjoyed the love of flowers, especially the Jasmin which they used to make into garlands. Rosalind married Rui Mascarenhas who was from Mombasa, on 20th January 1958. Their early married life started in Dar es Salaam during the '60s. Life with husband Rui’s cousins created delightful memories.

Egged on with Rosalind as a daring crusader, the families enjoyed beach gatherings and feasting on authentic home-produced delights. Rosalind was but a young mother and of course had a zest for life and play when she first came to Mombasa in 1966. With husband Rui and her four boys, they lived in an apartment on the floor above where Rui’s parents and siblings had been living. The warmth of the extended families across two dwellings was a lifestyle that was reminiscent of village Goa. Rosalind and family were soon part of the Barry Road neighbourhood in Ganjoni. She took part in street games like seven tiles, hopscotch, cricket and many a game punctuated by a quick halt to let the traffic go by. Rosalind’s love of cooking, especially traditional Goan sweets made her even more popular.

These were the early years of Kenya’s independence from Britain. Most Goan and Indian Asians went through the angst of thinking about their futures, especially their very young children. This was the time of emigrations where families and friends prepared and departed for distant shores. Rui led his family’s exit by moving to Mossley, Lancashire, UK in 1967. The Mascarenhas’s (Rui’s Dad and Mum) and D’Souza’s (Cosmas and Rose) were long time family friends and then found themselves as street neighbours where the bonds grew stronger. 1968 was the year that both families had planned to emigrate to the UK. Tragedy struck in the guise of a road accident on the final weekend of Rosalind and her boys’ departure from Mombasa.

Sadly, this cut short a full physical ability for an active young Wife and Mother of four incredibly young boys. Rosalind was bed bound and eventually evolved a life from the wheelchair whenever this was possible. Even in those early traumatic days following the calamity, Rosalind showed a strength of purpose, faith, hope, duty, and commitment to her family. Conversations and letters of exchanges would show the emotional roller coaster of unprecedented hope and despair and struggle that Rosalind herself was managing. Plans were made and on 28th July the D’Souza’s left Mombasa. They joined the Mascarenhas’s in Nairobi and together boarded the plane headed for Gatwick Airport, London. Rosalind was medically cared for on the plane whilst each of her four boys was looked after by the D’Souza children.

The two families were met by Rui and his sister at Gatwick Airport outside London. In multiple taxis, they headed for London Euston Station for the train journey to Manchester Piccadilly. The very emotional reunion then saw Rui and Rosalind head via ambulance to the then Lodge Moor Sheffield hospital. The rest of the entourage proceeded to Mossley. Rosalind’s initial years in the UK were inextricably linked to the spinal specialist care at medical centres, and latterly the Sheffield Northern General Hospital. Those early periods saw an unending array of hope, will and disappointments in helping Rosalind adjust to such physical limitations and consequences of paralysis. The will power, determination, courage, strength, responsibility, and leadership Rosalind demonstrated left everyone who met her in absolute awe. Anything that can be said of how Rosalind’s poise, presence and inspiration affected others is truly an understating of the reality.

Rosalind was special because she was truly herself. Her impact on others, from everything she loved, cared for, shared, and helped with, elevated her in all who knew her and came to know her as nothing short of a wonderful phenomenon. Some triggers for happy memories of Rosalind the wife, mother, grandmother, mother-in-law, sister, aunt, friend include: Her fruit cake and batika coconut cake, Christmas sweets, her fish curry, her laugh, her nails, her love of Elvis Presley, how she was always wanting you to eat more. The huge meals and then chocolate at the end! Her Woodworking and Canework skills, her love of flowers and gardening, her incredible agility with the wheelchair, her beloved Cockatiels and budgies – two favourites being Joey and Jeanie.

Above all, when Rosalind was talking to you, it was as if she was looking and communicating directly to your heart. Her sense of humour, her laughter, her unreserved directions, and sheer energy to perform and achieve is surely an inspirational story of iconic measure. Rosalind resonated with dignity, grace and magnanimity that surely is a model for us all. Rosalind is survived by her loving family: Husband Rui, her sons and their partners and her grandchildren.

PS: We are in unprecedented global pandemic times. This significantly impacts any intentions to formally farewell a loved one both culturally and legally. A compliant private funeral will be held at Mossley Cemetery. At some stage after that, the family will make available a tribute in photographs via internet accessibility for those family and friends who wish to pay their respects and reflect on Rosalind the person they remember. Please register your interest to have this access to: stanleymascarenhas@gmail.com