NORMAN DA COSTA: A celebration of Goans in stellar cricket 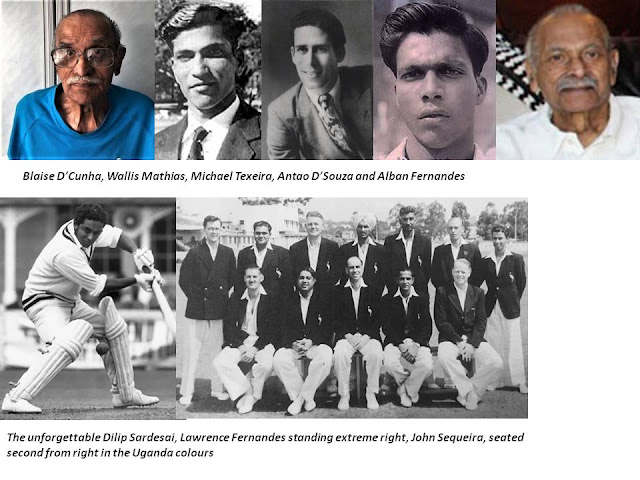 Put a red ball in his hands and Blaise D’Cunha instantly turned into a magician, a conjurer of tricks. This performer did not pull out rabbits from a hat but he baffled the best with his spin. Would that ball go straight, turn left or right? Or would it be the trick ball in his repertoire – the dreaded googly. Only D’Cunha knew. In his younger days, he mesmerized batsmen in Pakistan. He then took his act on the road to Africa where he left an indelible mark in Kenya, Uganda, Tanzania and South Africa. D’Cunha was one of three Goans who made a name for himself in Pakistan along with Wallis Mathias and Antao de Souza, who were both capped by Pakistan (more on them and others below).

Charlie de Souza, one of Uganda’s finest all-rounders who played against Blaise on several occasions, had the highest regard for the Kenyan. “When he first arrived he was almost unplayable,’’ said de Souza. The batsmen were unable to read his googly and, in their panic, they would surrender their wickets. Blaise also had a great match temperament and was a thorough gentleman.’’

After a long and stellar club career with Suleiman Virjee Indian Gymkhana, a club that fielded the likes of ace all-rounder G.B. Jhalla, Ramanbhai Patel and Jawahir Shah, the spinner joined the Railway Goan Institute, a club better known for producing world-class field hockey Olympians including the late great Alu Mendonca who was also a fiery pace bowler. It was here at the RGI where I got a closer glimpse of this cricketing giant from close up instead of the press box. Due to polio at a young age, Blaise had a limp but that did not stop him from delivering a whirring ball. The ball hummed in flight. We, in the field, had to be on our toes all the time. While many batsmen fell to catches in the slips or the boundary, our wicket-keeper Cecil Fonseca, had a field day whipping off the bails for a stumping.

One of Blaise’s endearing qualities was that he was down to earth. There were no airs about him and he reminded me so much of Muttiah Muralitharan, the Sri Lankan superstar, who also spun his way to greatness. I met and covered the greatest spinner of all time for the Toronto Star and he was so much like Blaise – simple and genuine. Murali, of course, had a bent elbow and many felt this gave him an unfair advantage. Blaise had a bad leg and a huge right thumb as a result of a snake bite. But that did not deter him from also being a first-class high jumper. Apart from his exploits on the field, he was a joy to watch  - on the table. Yes, table tennis. He combined with Jarnail Singh, another multi-talented sportsman, to win several doubles titles and go on to represent Kenya. I once had the misfortune of being drawn against him in an earlier round of the Kenya Open. Needless to say, D’Cunha moved on in straight sets without breaking a sweat.

But back to cricket. While Blaise was initially selected for Kenya and East Africa for his bowling, he quickly reminded the selectors that he could be relied on to bash that ball in the event the top order failed. In the annual Asians versus Europeans clash at the SVIG ground in 1955 D’Cunha and Jhalla played havoc with the Europeans in a runaway 255-run thrashing. Blaise carved out an unbeaten 100 as the Asians posted 251 for nine and in reply the Europeans managed a meagre 215 thanks to fast bowler Jhalla claiming five wickets. In the second knock Asians piled on 191 for seven declared and the Europeans hit the showers early after being dismissed for a meagre 72 thanks to Jhalla, who pocketed four for 27 and Blaise captured three for 28. That same year this outstanding all-rounder completed a haul of 100 wickets for the season with 15 centuries to boot. My buddy John Noronha, a former Ugandan who now resides in Canada and who I consider the local Wisden for his photographic memory and general knowledge of the game, provided me with details of some matches where Blaise had a significant impact on the outcome. One was in December of 1958 at the Nakivubo Stadium in Kampala.

“Kenya put up a modest total of 174 with Blaise the second-best scorer with 38. He then went to work on the Uganda lineup and skittled them for 68. Blaise took seven for 32 that included four ducks. The Uganda batsmen just could not figure out his googly. Blaise went on to score a very useful 37 in the second innings to lead Kenya to a narrow 21-run win.”

He tormented Uganda on two other occasions. In the first match in 1952 he took two for 35 and five for 23 to lead Kenya to a massive 254-run win. In 1954 he again struck with figures of five for 27 and five for 56 in a 128-run Kenya win.” Tanganyika also felt D’Cunha’s sting. In 1957 in Dar es Salaam he sent the home team packing for 86 with him capturing eight for 28 (three clean bowled, two legs-before and two caught and bowled. He followed that up with knocks of 35 and 44.

After a star-studded career with the SVIG where the clubs hoisted several trophies, D’Cunha joined forces with his old buddy Johnny Lobo, one of only a couple of Goans to crack the Kenya Asian lineup. When Blaise landed in Kenya, he met Johnny who invited him to join Kenya Goans for a Sunday contest against Nairobi Club, considered the plum fixture during pre-independence days. It was the country’s top European club and always put out a delectable lunch and tea spread. Goan clubs loved the hospitality at this venue and the Royal Air Force. At the RAF a bottle of beer could be purchased for 25 cents and a tot of hot drinks was the same price. No wonder few Goan cricket or field hockey player got home sober. Against Nairobi Club the home team was off to a flyer with 60 without loss when skipper Lobo introduced his ace in the bag. D’Cunha teased and tormented the home team by capturing all the 10 wickets and his reward was possibly an extra cucumber sandwich. Blaise had arrived and the rest is history.

RGI was the cream of the Goan clubs and among the early stars were star batsmen Maurice Gracias and Batu Noronha, Piety Fernandes and fast bowler Mendonca. The other stalwarts in later years included Darel Carvalho, Jarnail Singh, Charlie Ferrao, Sunil Sarkar and Teddy Gomes, a classy batsman who narrowly missed being picked for Kenya Asians.

The club played in the premier Kenya Cricket League and faced the likes of the legendary Basharat Hassan, Mehboob Ali, Zulfikar Ali, Akhil Lakhani, Narendra Patel and a host of other top-notch cricketers on a regular basis. In 1968 the club with seasoned players such as Lobo, Fonseca, Darel Carvalho, Charlie Ferrao, Sydney Machado, Donald Gonsalves and Sunil Sarkar embarked on a fairytale run in the KCA Knockout tournament, coming within a hair’s breadth of knocking out Sir Ali Muslim Club, the odds-on favourite for the trophy, out of the tournament. RGI struggled to 90 for eight before Fonseca tore the SAMC bowling to shreds by scoring a sensational 95. With Blaise in the lineup it appeared RGI’s Cinderella run would continue. But the RGI skipper made a tactical error in not using his ace bowler at critical times and SAMC survived what would have been the biggest upset in Kenya cricket annals. Wicket-keeper Naseer Butt and all-rounder Emery Jones combined to avert disaster. Emery, batting at No. 6 scored 33 and Butt at No. 7 got 56. “We usually never got to bat as our top order was so good,’’ Butt told me from London. “When I came in to bat, Emery told me ‘just play straight’ as I was having a tough time figuring Blaise’s leg-breaks and googlies. Blaise was a spinner of the highest quality and we barely managed to win. After the game Blaise came up and congratulated me. He was a very good person. A great cricketer,’’ added Butt.

Kenya had one great Goan all-rounder – Blaise D’Cunha. Tanzania countered with Alban Fernandes. Uganda led the way with three who could walk into any East African squad and they did. Fernandes was a fiery opening bowler and also a batsman who could clobber the ball. Fernandes also captained Tanganyika’s field hockey team in several international matches and he was disappointed his country failed to qualify for the Olympics.

Uganda produced the bulk of the best Goan cricketers in Africa. Several represented Uganda including all-rounder Lawrence Fernandes, Charlie de Souza and Michael Texeira. I never did see the late Texeira in action but every Ugandan sportsman speaks of him in glowing terms. Texeira played in the ’50s for the Kampala Goan Institute, the Goans in the triangular quadrangular tournament and also the national team. The other classy batsman during his time was John (Chuck) Sequeira. Texeira’s His feats with bat and ball are legendary and he was always an automatic choice for East Africa. “His batting was a pure delight to watch,’’ said Alu Mathias, a former Ugandan international batsman. In a triangular match against the Europeans in 1953 Texeira smashed 50 in 20 minutes and that “was a record for a game of that stature,’’ said Mathias. Sequeira weighed in with 133 for a huge victory. “He was a fast bowler and confused batsmen by varying his pace.” He will always be remembered for his 10-wicket haul against K.S.C. The European club was dismissed for 143 with Texeira taking all 10 for 42 runs. The Goans, behind a superb unbeaten 107 by Celly Dias, another Uganda cap, scored 157 for four. Lawrence was simply brilliant. A stone-walling opening batsman whose wicket did not come cheaply, he was an excellent leg spinner and he was a world-class fieldsman. After moving to England he starred as a spinner and just like Blaise the Englishmen couldn’t read his googly. De Souza was a reliable stock bowler and a hard-hitting lower-order batsman. Like Texeira and Fernandes, De Souza was an automatic choice for Uganda where he often starred with bat and ball. They all made their mark In East Africa and impressed visiting squads.