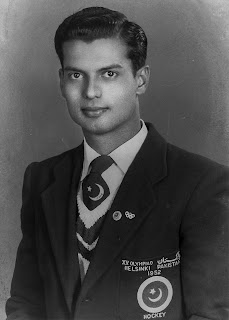 I NEVER SAW Jack Britto in action. You could say he was before my time but in Africa those that knew of him spoke in awe. I had forgotten about him, but he kept popping up while I researched various cricket stories and more recently the Blaise D’Cunha story. I am indebted to his son Desmond for painting the following portrait of his illustrious father. St Pat’s High School was a brilliant nursery for budding sportsmen, especially in Cricket and Hockey. There were four brilliant cricketers in the making: Antao D’Souza, Wally Mathias (both played Cricket for Pakistan with distinction), Blaise D’Cunha and Jack Britto who graduated with honours in their various sports.

JACK BRITTO was one of a handful of talented sportsmen of the Karachi Goan Association  Gymkhana who reached the top position in their respective sports. His sporting career started in 1936. He showed early promise when playing for his alma mater St. Patrick’s High School where he excelled both at hockey and cricket. He brought fame and glory to his school. Jack always had a smiling face whether losing or winning. He also played badminton, table tennis and billiards with an equal amount of enthusiasm. Jack was a fine cricketer, wielding the willow in a style that was a treat to watch, to the delight of his enthusiastic supporters. In Jack, the Goans of Karachi were blessed with another true sportsman. 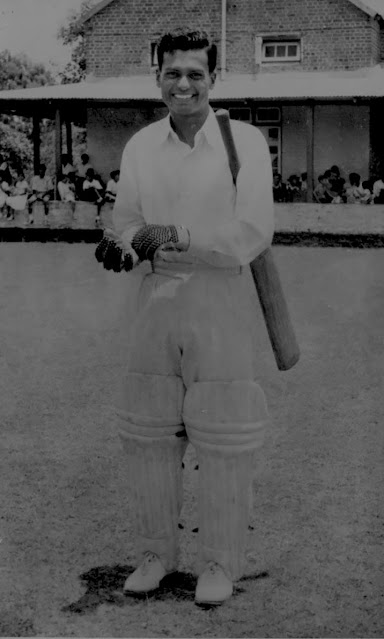 He was born on August 16, 1924.  Jack represented St Patrick’s at the age of 13. He was the first to reach a double century in the Inter-School’s Tournament, famously known as the Rubie Shield. The Rubie Shield was started by his father, Diogo Britto, in 1937. His record score of 232 not out stood until it was broken by Pakistan Test Cricketer Hanif Mohammed in the same tournament (Inter School Rubie Shield Tournament). Jack’s memorable knock had followed an earlier unbeaten 182.  At this stage of his life, Jack was contented with the way his career was shaping and was doubly rewarded by being selected as the Captain of St. Patrick’s School. Jack could justly be proud for St Pat’s as he held the distinction of winning the shield for 5 years in succession, 3 years under his captaincy. From 16 to the age of 21 he represented St. Pat’s.

By now Jack had already been selected to play for the Sind and Karachi Team in the Ranji Trophy. Jack was chosen for the Sind team in the Pentangular between 1940 and 1944. He took the field, with players like Jeomall Naoomal, Gulab Rai Kishenchand, S.K. Girdhari, B. Lanewalla, Jamshed Khoodaddad Irani, MInoochehar J.Mobed, Qamardin, Daud Khan, Abbas Khan Lodhi, Fazal Lakda and several previous Sind stalwarts which included names like Ghulam Mohammed, the old Baloch player from Lasbela, who had toured England with the 1932 All India Team. G.S. Ramchand who went on to captain India and defeat Australia on the famous turning pitches of India. Another famous name worth recalling was that of Abdul Aziz Durrani. He was believed to be employed by the Sind Madressah School and was well known in Karachi as the Sind Madressah coach. He was the father of Indian Test Cricketer Salim Durrani.

Jack was lucky enough to meet some of the other famous names like the old Maharashtra Ranji Trophy All Rounder and veteran all India cricketer and Pakistan test cricket selector, Jacob Harris. Jacob had high hopes for Jack.

During 1942-1946, Jack played for the ‘Rest’ in the Karachi Pentangular Cricket Tournament.

In 1946/7, he represented Karachi and Sind in the All-India Tournament (Ranji Trophy) at Bombay. (In 1946, Sind won the tournament).

The Goan community heard the sad news regarding Jack Britto: he had to choose between cricket or hockey. The Karachi youngster who in fine batting form was being tipped to be selected for Sind in the opening match against the West Indies. This was between 1949- 1950. The West Indies included players like Everton Weekes, Clyde Walcott, Allan Rae, George Carew, Robert Christiani, Gerry Gomez, James Cameron, Dennis Atkinson, Prior Jones, John Trim, Wilfred Ferguson, Cliff McWatt, Ken Rickards, Geoff Stollmeyer and the “Black Bradman” George Headley. Frank Worrell was initially selected but was forced out on health grounds.

Jack finally got his call up to play for the Pakistan cricket team against the West Indies team but at the same time, he was chosen for Pakistan to tour Europe in the Hockey World Championships in 1950. After partition, the authorities were forcing him to make a choice, this was heartbreaking for Jack, for he realised that he was good enough to play both hockey and cricket at the top level. Jack chose to tour Europe with the hockey side.

Thus ended in tragedy, one of the finest careers of a sportsman that could have gone on to international honours, both in Cricket and in Hockey.

In local tournaments he soon won recognition in hockey circles. He was a clever tactician blessed with stick wizardry and his ball control was as artistic as it was effective. Jack started as a crack centre forward in the ‘D’. He was clever agile and dashing. He thus soon built up a formidable reputation as an exponent of good, clean hockey.

Some even dared to compare him with the famous 1936 Indian Olympic player to Dyan Chand.

In choosing to play hockey, Jack had finally decided to give up his career in cricket. It was a sad day for the game of cricket, but he was soon one of the best centre-halves in the game. The Karachi Goan hockey teams were great crowd pullers at the famous Aga Khan Hockey Tournament held in Bombay.  The wizardry of the Karachi Goan players in the Cabral  Shield Tournament in Karachi shone against the top teams that were invited from all over India like the Bhopal Wanderers, Calcutta Customs, Kalayam Mills, Khalsa College and Jhansi Heroes. He played in many major provincial tournaments in undivided India:

1941 Won the Cabral Shield when the school beat the famous Bhopal Wanderers.

Captained the Karachi XI in the national championships in Lahore.

In 1944, under his captaincy in cricket and hockey, toured India (Ahmedabad, Bombay, Poona etc. The tour was cut short due to the great explosion in Bombay and most of the members of the team had narrow escapes.

In 1945 won the Munawar Cup and the Coutinho Cup.

He was soon being tipped to play international hockey. Jack’s hockey skills as a goal-scoring centre-half attracted the attention of the senior members of the squad. This eventually landed him the top spot in the national team and Jack was chosen to play for Pakistan in the 1950 World Championships in Barcelona Spain. He represented Pakistan in the World Championship at Barcelona, Spain and also toured Europe. Pakistan  were joint winners with Holland.

1951 Toured India representing Pakistan Independents in the Invitation Gold Cup Tournament at Bombay and Delhi Cloth Mills at Delhi. Pakistan were runners up in the former tournament and winners in the latter.

Jack was selected for the Pakistan Olympic team for the 15th Olympiad, Helsinki Games in 1952 as a centre half. He found a place in the side because of his excellent stickwork. He also toured various European cities after the Olympics. (Paris, Lyons, London, Amsterdam, Brussels, Venice, Berlin, Stuttgart, Munich, Hamburg, Duisburg, Zurich, and Rome). He was capped eight times.

In 1956 was a trialist for Pakistan Olympic team to Melbourne.

He captained the Karachi X1 as a centre half in the national championship at Lahore.

He played cricket for Mpingwe ‘A’ Sports Club for many years until 1975. He topped the batting averages for most of the years. He was Malawi’s outstanding spin bowler bowling leg breaks, off-breaks, googlies & topspin. His googlies were unplayable. He took 5 wickets in an innings on many occasions. On one occasion he took 7 wickets for two runs. He also captained the side. He was also a brilliant slip fielder taking many catches.

1957 Played for Nyasaland (Malawi) against Stragglers and Country Districts (Zimbabwe).

1959 Represented Nyasaland (Malawi) versus Mashonaland. This was the first appearance of Nyasaland in Harare (Salisbury) Zimbabwe.

In Bowring Shield Cricket Tournament scored 155 not out. “A league match.

Played for Nyasaland (Malawi) versus Watershed in Salisbury (Zimbabwe).

Played for Cricket Club Malawi (C.C.M) from 1957 to 1975 topping the batting averages for many years.

The Sunday Mail Correspondent on the 22nd August 1959 reported “It was Jack with magic stick that scored the winning and only goal of the game”, Malawi against Mashonaland (Zimbabwe).

Jack also played hockey in Zimbabwe against the Springbok players who also played for Rhodesia, namely the Pithey brothers, Colin Bland, Griffin, Godfrey (Goofey) Lawrence and Rob Elliot. Bland the former South African Test cricketer was arguably one of the best fielders ever.

1967 Presented the Jack Britto Trophy to the Hockey Association of Malawi.

1968 Manager of the Malawi X1 to Salisbury (hockey). (Harare Zimbabwe)

1969 Coached the Malawi team to Dar-es-salaam (Tanzania) in the East African Championships-first appearance there.

Jack was a wristy, skilful doubles player who served from the corner of the box, making it very difficult for the opponent to return. He was very deceiving in his shot play. His net shots were brilliantly disguised and very hard to read. His calm tactical game was amazing and could adapt to any situation at any time. It was known that his opponents would turn up just to watch him play.

He played at club level for Mpingwe Sports Club.

Jack lived in London from 1976 to 2013 and led a sedentary life.  He continued playing social cricket, badminton and tennis. Played badminton in his early eighty’s and still won tournaments.

By the late Dr Mohammed Hussain Baluch and Desmond Britto.

“Although I met Jack only once, it was enough to identify him as someone who could have kept company with the wizard of hockey Dyan Chand. He had the personality of Keith Miller, the genius and patience of Hanif Mohammed and the artistic skill of Sachin Tendulkar.