A Blaise of Cricket Glory

Blaise D’Cunha plays his final innings
The Lord called Blaise to be with Him on the 8th February 2021, following a short, non-Covid-19 related illness, surrounded at home by his family.
A Mass to celebrate his life and a funeral service will take place in the near future, due to current guidelines it will be family only.
Out of the generosity and kindness of your heart, please pray for the repose of his soul, may the Lord grant him eternal rest.
Messages of condolences or personal memories can be sent to the family at blaisedcunha28@gmail.com
Best wishes, Joe Desa.
He is the husband of Celine, and father of Grace, Basil and Roy.
THE last ball of the last over has been bowled. The umpire has signalled “game over”. The stumps and bails have been knocked down and gathered. The pitch has been covered … until the next game. Blaise D’Cunha won’t be there, he has played the last innings of life on earth. We may probably never see the like again … the great Goan cricketer if not the greatest. Cyprian Fernandes.
One Blaise D'Cunha's favourite photographs: The 1956 visit of the Pakistan Cricket Writers Club to Kenya: 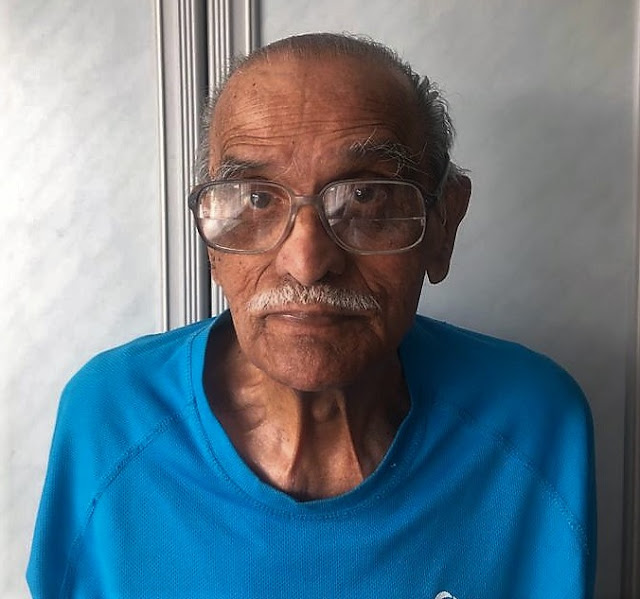 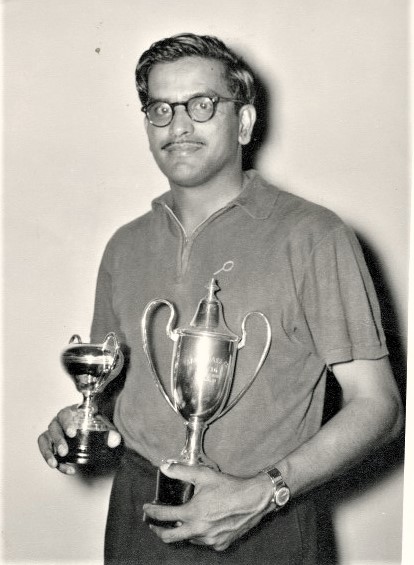 The way I will always remember him ... always a winner!

In a previous article, I mentioned three outstanding Goan cricket players from Kenya: C. M. Gracias, Johnny Lobo and Blaise D’Cunha, who was with little doubt the greatest Goan cricketer with bat and ball I have known. He stands shoulder to shoulder to two other Goans who played international cricket, Wallis Mathias (batsman) and Antao D’Souza (medium pacer) for Pakistan. Both men also attended St Pat’s in Karachi. Blaise’s name is cemented in any list of top eleven cricket players from Kenya or East Africa as a whole.

Of course, there are many, many more I could have added.

His name sits proudly in the roll of honour of the former Suleiman Verjee Indian Gymkhana (Nairobi Gymkhana), his favourite club and some of the favourite men he played club cricket with. He is now 93, generally in good health, resides in London and as with all of us with age, getting frail. To this day, he has the respect and admiration of anyone who saw him anywhere in East Africa, Pakistan and India. I feel really, good now … and will feel even better once I have finished writing this tribute. For more than 20 years, I tried to track him down and it was not until a few days ago that his son-in-law, Joe Desa got in touch with me. He had just read the Johnny Lobo story featured in my blog. I am very indebted to Joe Desa for an immense amount of help with this story.

This is the story of a magnificently determined personality, who overcame adversity despite suffering from polio at a very young age, additionally a snakebite on his right thumb, to compete and excel at the highest levels in sport.

In Karachi, Blaise found a sports heaven at the Karachi Gymkhana Club and St Pat’s school, which produced many hundreds of fine sportsmen and women. He was only 14 when he started but it was not long before he had made the school team. What’s more, he was soon making some pocket money bowling to the senior batsmen in the nets.

This is from a clipping: “Blaise D’Cunha, one of the finest bowlers the school has produced: vice-captain (it was not long before he was captain) of the school team, represented Sind province in the Festival Match against Maharashtra.” He played Ranji Trophy cricket, inter-provincial school cricket at Delhi and Calcutta. “A very steady bat. A student of the school who is master of the willow.”

“Blaise D’Cunha also proved to be a deadly bowler.”

“Hardly 18 years old, with a little coaching will turn out a first-class bowler.”

“A bright century by Blaise D’Cunha was the outstanding feature of a match between St Pat’s and Pakistan Wanderers. The clock saved the Wanderers from defeat.”

Blaise answered a few questions with the help of his son-in-law, JOE DESA:

Please give a brief insight into your early life:

My father had secured a position as a Steward whilst in Goa, India, for East African Railways in the early 1920s; along with my mother and siblings we moved to Masindi, Uganda, where I was born on March 24, 1928, one of 10 siblings. I was baptised Bras Agapito Lucas D’Cunha and was affectionately known to family and friends as Blaise.

My father’s contract with East African Railways expired in 1932, unable to secure any new employment in East Africa, we returned to Goa.

He subsequently secured a position as a steward at the Karachi Gymkhana Club, in Karachi, Pakistan in 1935, where we resided on site, having the ‘run’ of the grounds as kids.

How and where did you learn to bowl?

I was a ‘regular’ in the sports fields, wherever and whenever feasible, initially playing cricket, batting and bowling for fun as a pastime, later on as my bowling techniques improved, bowling to established cricketers who played for the club, additionally overseas touring players, practising for upcoming club and national and international matches, earning monies (they put coins on the stumps and if I bowled them, I was rewarded with the coins)

I attended St. Patrick’s high school in 1937, where despite my handicap; I excelled at sports, high jump, where I was school champion and especially, cricket.

I represented the St. Patrick’s school cricket team from the age of 14, playing local and national venues, including travelling to New Delhi, and the Brabourne Stadium, (Bombay) Mumbai, winning the Cricket Championship of India.

I was part of St. Pat's Goan cricket team, some of whom went onto international and Olympic recognition in their own right

From 1944 -1948, I played in the Ruby Cricket shield, we were winner's for 5 years, Jack Britto (later Pakistan Hockey Olympian, also played in Malawi) was captain, then I took over from him

When I was 22, I left Pakistan and returned to East Africa, taking a transfer from National and Grindlays Bank in Karachi, settling in Nairobi, Kenya.

Before the independence of Kenya, Uganda and Tanzania, I represented East Africa, when the ‘union’ went their separate ways, I chose to represent Kenya.

I was selected for the Kenyan/East African cricket tour of South Africa in 1956 against the non-white team and the subsequent return tour in Kenya in 1958.

I retired from international cricket in 1965 but played for my club until 1967; thereafter I took up table tennis in 1968 playing for Kenya.

What was so special about the way you bowled?

At a very young age, I contracted polio, which at the time was not initially medically diagnosed, affecting my left leg, leaving me partially handicapped with a pronounced limp. This limited my physical ability; determined not to be ‘left out of the group’, I adapted my skills to suit.

A snake also bit me on my right thumb, which is still evident today. I found that the enlarged thumb helped me with the spin.

How did he learn to bat? Were you a batsman or a bowler first?

I was a bowler first and foremost. I was very lucky to have attended St. Patrick's High School in Karachi and at the time, there was a fantastic crop of very talented young men who excelled in sports, especially cricket and hockey. Some of my compatriots included Orlando Ferro, Simon, D’Souza, Douglas Thomas, Michael Braganza, Gulam Razza, Jack Britto, Stanley D’Souza.

Who was the most difficult batsman to bowl to?

There were, as usual numerous … too many to name individually, all having their exquisite techniques and abilities.

Who are cricketers you remember to this day?

Again, numerous. I played against the very best in my heyday. No one particular player above the very many superb, gifted and talented I had the pleasure to have played with and against.

(However, he does recall playing against the mighty West Indies, including the Three W’s, Frank Worrell, Everton Weekes and Clyde Walcott. This was in Kenya in the 1960s)

Is there one cricket performance that you can remember?

The Kenya tour to South Africa was ground-breaking in its time, apartheid was in place and strictly being enforced.

You were a champion table tennis player?

After my cricket career ended, I took up playing table Tennis, winning with Jarnail Singh the GI Tournament. I was partnered Viktor Barna (multiple world champion) when he toured Kenya in a doubles competition. 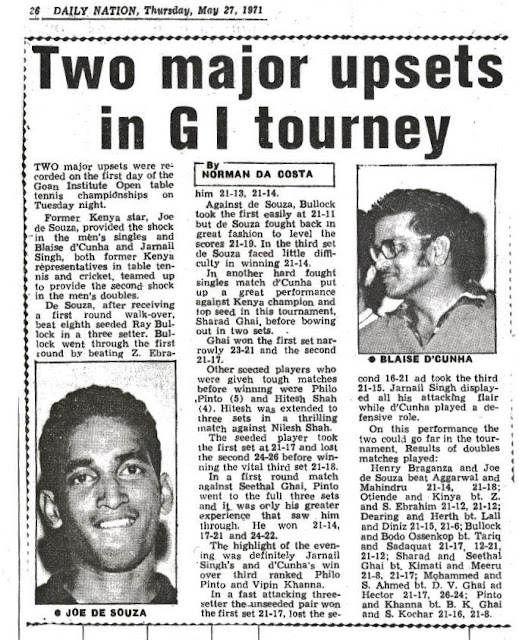 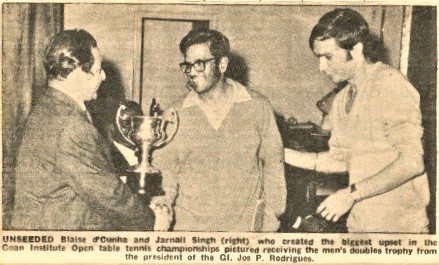 What other sports did you enjoy?

What he learnt in Karachi, perfected Blaise as an all-round cricketer in cricket at club and national level.

While the triangular Kenya/Uganda/Tanganyika matches were well supported, it was the annual Asians v Europeans which was probably the star match of the annual calendar. Blaise had a starring role in most of them, if not all.

For example, in 1952, Kenya beat Uganda by 254 runs. In the first innings, Kenya scored 214 (Shakoor Ahmed 58, DW Dawson 58). Uganda scored a measly 87. Kenya in their second innings scored a further 190, thanks mainly to Dawson 78 and a spirited 39 by Blaise. It inspired one reporter to write: “D’Cunha was giving first-rate support and it is surprising that he warranted such a position as No. 11). In second innings, Uganda capitulated scoring only 63. Blaise had match inning figures 7-53.

Reaching that bowler’s milestone of 100 wickets in a season was never too much trouble for Blaise. On one occasion (1955) while playing for Non-Official Asians against Asian Officials, he achieved the mark by taking a total of 10 wickets in the match.

However, it was the Asians v Europeans where he shone equally with the bat and ball. If he was deadly as a spinner, he was even more so as a daring batsman. There was no, tap-tap pussy-footing with Blaise, rather more calculated carnage as soon as he got his eye in. He cut, drove, and smashed the ball to all corners of the ground. When needed he could be relied on to save the team by smashing a quick 40 or 50 (in 50 minutes or less) or 100. He was ferocious and it was always a delight to see him in action. Once the Asians found their form, they won five or six consecutive matches to reduce 19 match tally to 10-9 to the Europeans.

He fared well against all visiting teams but it was the tour of South Africa that remained memorable for him. For one thing, he met and played against the coloured Basil D’Oliviera, who at the time should have played for South Africa but was not allowed to due to apartheid. Nonetheless, the Kenya Asians side was unbeaten and quite rightly the South African man had warned of Blaise as the dangerman with bat and ball.

You can write to Blaise at blaisedcunha28@gmail.com.

Special thanks to John Noronha for bringing this to my attention: The late Dilip Sardesai, played 30 test matches for India between 1961 and 1972. Dilip who hailed from Margao, opened the batting and his run tally includes significant innings against West Indies and England. He would have to be included on among the greatest Goan cricketers. 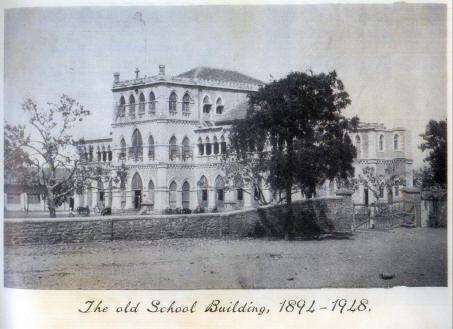 St Pat's Karachi, where Blaise honed his skills ... played for the school from age of 14 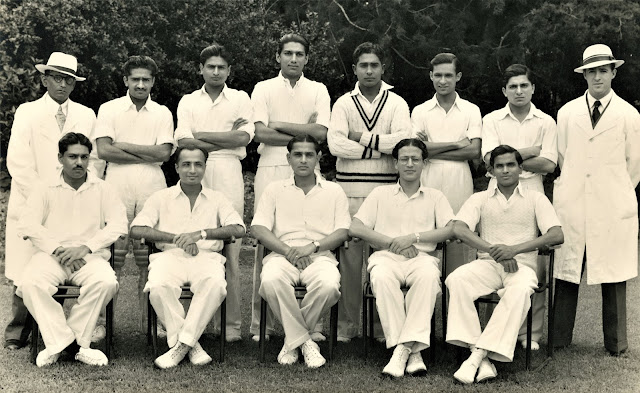 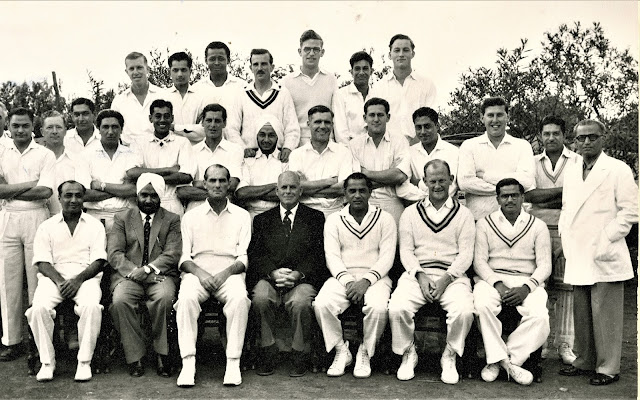