Gone fishin' ... in Uganda, and here and there!

Fishing comes naturally to the Goan.  Many a Goan has fished off the freshwater piers in Entebbe, Port Bell, Bukakata, Mbulamuti, Namasagali, or from the shore or rocks at Old Entebbe, Nkumba, the old Rippon Falls – just to name a few.

Other the ones that got away, catches included Nsoga (kerio), Tilapia (ngege), a bony fish called Kisinja, and catfish.  But, the most exciting to land was undoubtedly the large Nile Perch.  Join me on a memorable fishing expedition for this worthy game-fish of the deep.

All agog with excitement, four of us pile into Seby’s pint-size Austin A40 (UFB113), well before sunrise.  Our destination:  Mbulamuti on the mighty Nile, where a pre-arranged motorboat, with heavy-duty fishing gear, awaits us.  Naturally, we carry adequate provisions for sustenance and copious quantities of fluid fortification. 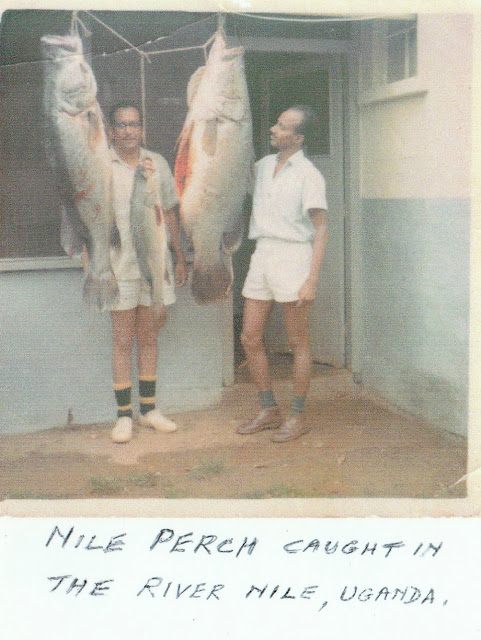 In the early morning fog, Prip, the navigator, is still in a fog himself.  He is not a morning person.  Instead of a left turn at a fork near Kasangati, we go off to the right  (blame it on the fog !), only to find ourselves in the middle of nowhere.  We retrace our path, but not before the radiator starts belching smoke.  (Cars in those days had water-cooled radiators).  Seby could not remember if he had checked the water level the day before.  Panic sets in.  There is no water in sight.  All make a personal contribution that saves the day. We arrive at our destination without any other incident.

The local “captain” of our battered old boat promises to take us to the best fishing spots for perch.   Four lines are soon trolling in the wake of the boat.  An hour goes by without a bite.  We do not have to watch our lines.  Each of us is absorbed in his thoughts, the uppermost being:  “Will I be the first”?  The diesel fumes are overpowering.  The malodorous and dank swamp air does nothing to assuage our pent-up anticipation.  The Equatorial sun begins to test our tolerance.

Suddenly,  Freddie P. breaks the silence with a victory yell, when he gets a tug that nearly yanks him out of the boat.  To the uninitiated, it is akin to hooking a large log.  The next thing you know, a large specimen leaps high into the air and lands with a splash that sends ripples to our boat some 50 metres away.   The ”captain” cuts the engine and orders all other lines in to avoid them from getting snagged.   The adrenalin is pumping and F.P. “plays” and struggles with the perch for nearly an hour.  Exhausted and with no fight left, eager hands help in gaffing and then laboriously heaving the 150-pounder on board.  The catcher feels drained and does justice to two large bottles of Bell to revive himself.

The rest of us continue fishing, while F.P. sports a grin of smug superiority.  All but one of us – who shall remain nameless – are lucky and manage to land good sizers.  The boatman is kept busy de-gutting the fish as fast as we heave them on board.

Seby’s A40 groans and protests under the added load.  The radiator has now been topped up with brackish Nile water.

We head straight for Lake Victoria Hotel at our home base of Entebbe.  No, we are not going there for fish steaks!  Besides, we are unpresentable and reeking of fish and other unidentifiable odours.  Our good friend,  Motez R., the chef, receives our catch at the rear entrance, for storing in the hotel’s cold room,(we had no fridges in those days) till we are ready to saw off chunks for consumption or distribution to friends and neighbours.

Then off to the Goan Institute to brag about our piscatorial prowess and related adventures.

Then there were guys in Kisumu, many of whom used to just pop out to catch large tilapia (ngege) that night’s dinner or fishing in Lake Rudolf (later Lake Turkana) for giant tilapia, ferocious tiger fish and gigantic Nile Perch and plenty. Who could forget Franklin Pereira and Peter George D’Souza, kings of the Indian Ocean out of Mombasa fishing for Marlin, Black Marlin, Spanish Mackerel, huge tasty reef fish and lots and lots more, as a business and purely for fun? What about all those guys in Zanzibar, who first went fishing the India Ocean in dhows, the guys from Tanga all the way down to the Mozambique border fishing the mighty India Ocean. The Indian Ocean and its bounty of mackerel, whiting, Spanish mackerel, blue and mud crabs, and a million other favourites …