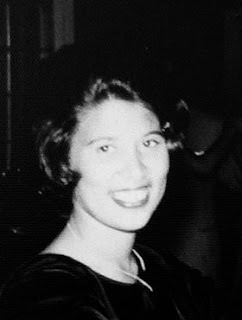 EDNA was born in the Kenyan town of Kisumu in 1939 on the shores of Lake Victoria, where her father had been posted by the British civil service. After several secondments in regional towns around Kenya, the young family of four children finally arrived in the capital, Nairobi, in 1953 where Edna attended Dr Ribeiro Goan School.

Edna was very social and, like her brothers and later her younger sister, had a natural ability to excel at sports. In her final year, Edna was rewarded by the school, receiving the Victor Ludorum prize for her all-round sports ability. After leaving school Edna attended secretarial college and began her working life. Together with her life-long best friend, Sr. Trifa De Sousa, she focused her sporting capability mainly on athletics and hockey, working and training during the week and travelling to championships and tournaments on the weekends.

Her hockey team, the Collegians, was very well-organised and became the best women’s hockey team in East Africa. The team members had a special bond and the players remain very close to this day.

After marrying Renato Monteiro in 1963, Edna worked in administration for Sassini Coffee Estates. She strived to balance the demands of career, family and an active social life. Edna played hockey for the Goan Institute where she captained the team and mentored many of the younger players. She also got a lot of satisfaction from being on the Ladies Committee which did so much to organise community events. She enjoyed cooking with the other ladies. They called these sessions “Board Meetings” because they would bring their cutting boards and talk about the week’s activities. Edna developed a passion for cooking and won several cooking and recipe competitions in Nairobi.

In 1983, Edna and Renato made the difficult decision to emigrate to Australia to join the rest of her family who were settled in Canberra and Melbourne. This was in the hope that they would provide a better education for their sons, Malcolm and Julian. Leaving her idyllic lifestyle in Nairobi to start life afresh in Canberra presented many challenges which Edna embraced. She had a passion for life which allowed her to develop new skills, loyal friendships and to be closer to her mum, Mary. After a long career, she retired from the Public Service in the late 1990s. Edna subsequently spent a lot of time doing community work with her local Church and charity organisations. She loved gardening and joined the ‘Friends of the Botanical Gardens’ where she volunteered for decades. She was known for her practicality and ability to just get on and do whatever was required. This trait is fondly remembered by her immediate family whenever they called on her.

Edna loved travelling to see her siblings and their families in Melbourne. Her children, daughters-in-law and grandchildren treasured her visits to Sydney, especially when she came bearing gifts of food and large piles of chapattis, which were rapidly devoured.

Over many years Edna developed a close-knit group of friends in Canberra who were unfailing in their support of each other. These friendships gave her great strength and much pleasure; they shared a fondness for conversation over many dinners, afternoon teas, and the occasional holiday.

Edna will be remembered for her true colours. She was a strong woman with a big smile, a genuine personality, and an ability to maintain loyal friendships across many decades and generations.

Edna was the matriarch who guided her family to a new country and taught us always to look forward and not be afraid of what lies beyond.