Fifty years as a vibrant social and sporting club is a significant milestone in the life of the G.O.A.(Toronto). Its Golden Jubilee is on April,23,2020. A historical perspective of this iconic club follows.
Whether in the humble “khudds” (village clubs) of Bombay or sophisticated institutes and gymkhanas elsewhere, the Goan has always been a gregarious creature with an inborn need for camaraderie. This characteristic has endowed him/her with the propensity to form clubs for social, sporting and literary purposes wherever they go, after coming to terms with the basic necessities of life -- food, clothing and shelter.

Back-pedalling now, prior to 1970 there were only a few amorphous Goan groups in Toronto, and their interests were either religious, social and sporting, but only marginally, as they were loosely-knit and accountable to no one. In the broader sports arena, field hockey was the common factor that brought several Goans together, though they played for different teams. At house parties or gatherings, lip service was paid to the need to form a proper Goan club to foster a sense of belonging, with no evidence of any initiative to form one.

In 1969, it occurred to most of the Goan hockey players that if they played together as a team they could easily be the best in Ontario and in Canada. Roque Barreto was the driving force behind this initiative, with Aloysius Vaz and Willy Monteiro as his lieutenants. To this end, a preliminary and exploratory meeting of all known players and well-wishers was called in December. It could be because of winter, lack of proper transportation, or simply inertia, that attendance was dismal and the meeting proved a failure. Undaunted by the setback, and winter notwithstanding, another meeting was called in January 1970. Of the thirty people notified, only six roughed it out. They were: Roque Barreto, Aloysius Vaz, Willy Monteiro, Tony Fernandes, Anthony D’Souza (Jnr) and Armand Rodrigues.

Decisive action was taken to (a) form an interim committee, (b) enter a Goan team for the forthcoming Canadian Field Hockey tournament, and (c) explore the allied issue of a coherent body under whose banner to play.

Spearheaded by the six, word of mouth brought 24 people together for a general meeting, on April 5, 1970. The idea of a club under whose auspices a consolidated Goan hockey team could play was unanimously endorsed and morphed into the Goan Overseas Association (Toronto) on April 23, 1970. The rest is history. Before long, membership started escalating rapidly and the club gained momentum in the realm of sports and socials. It was a force to reckon with when it came to field hockey, cricket and soccer. Tennis and badminton had a fair list of adherents. When the Uganda Goan refugees swelled our ranks in 1972, they came with enviable credentials and gave our teams a welcome fillip. The club garnered trophies in many an open tournament. Egged on by its success, it floated the Norbert Menezes Memorial Gold Cup field hockey tournament for a number of years. This tournament became pre-eminent on the continent and attracted teams from as far away as India, England, the Caribbean and the States. And, the ladies were not forgotten. They competed for the Savio & Joyce Barros trophy. Many members also donated floating trophies for other tournaments at parochial level.

Dances were always a sell-out to the extent the Lions’ Club in Etobicoke could cope with a capacity crowd. The dinners were beyond compare and the band was the best our means would allow. Needless to say, the camaraderie was exceptional. As would be expected, members formed the Goan Theatrical Group and kept lagging cultural traits and language skills alive with regular offerings of Konkani plays (“tiatr”) and lively songs. Annual Track & Field meets brought sister-clubs together in healthy competition.

The hugely successful International Goan Convention in 1988 (under the aegis of the club) was the brainchild of Zulema D’Souza, our first female President. It put the club firmly on the map and remains unmatched to date. The International Goan Youth Convention held in Goa in 1990, was a spin-off from the Toronto Convention. Embracing all facets of Goan life, “Viva Goa” festivities serve to showcase the community to all and sundry. And, not forgotten are the disadvantaged people in our community. The Goan Charitable Organization – a registered charity—comes to their aid.

In the early heady days, the vibrancy of the club was palpable. It was the largest Goan club on the continent, and the most active. Credit for managing the club and catering admirably to members’ needs, goes to the hardworking men and women who over the years have given selflessly of their time and energy in fostering the aims of the club.

That was then and this is now. Over the years, like clubs everywhere, membership that peaked some years back has started to ebb somewhat. Population growth has not translated into a corresponding increase in membership. Societal factors such as fragmentation, diminishing community allegiance, inter-marriages and insularity, in our second generation Goans, are changing our physiognomy, and our clubs are gradually lapsing into a terminal mode. Seniors’ clubs, spawned by the mother-house, have picked up the slack and have been doing a commendable job, at both ends of the city of Toronto.

When all is said and done, it must be noted that a younger set with nostalgic traits, has taken over the G.O.A. (Toronto), from the old guard, for some years now. Selwyn Collaco has been the President for the last few years now and has used his managerial and business acumen to keep the club abreast of developments in this digital age. He has done more than any other president of the club, to bring Goans from different camps to the G.O.A. (T) tent. He is ably assisted by like-minded committee members. And, Greta Dias keeps tending to the social needs of retirees, with unprecedented zeal. These volunteers keep the flame alive and pulsate to the rhythms of the times.

To celebrate the Jubilee, an elegant bash, with sit-down dinner and appropriate libation, and the accompaniment of two bands is slated for August 1, 2020.

A hearty toast to the club is in order!

(A picture of five of the six that spearheaded the formation of the club, is attached) 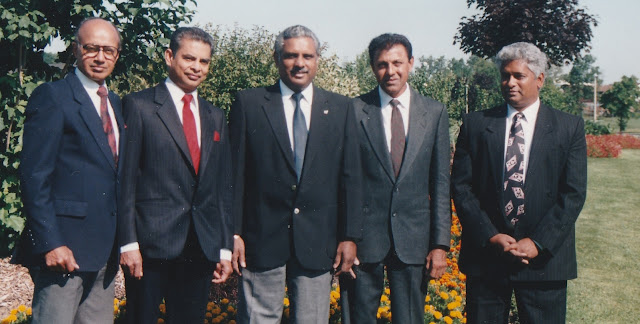