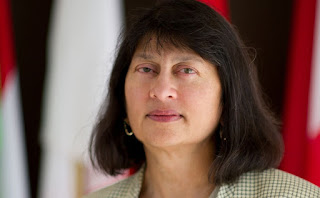 The human side of Brexit: the last goodbye to Brussels of a British representative with Kenyan and Goan roots Brexit is now a fact. As from February 1, 2020 and after a long negotiation the UK will officially leave the EU. Apart from the political and economic consequences, Brexit is behind of many personal stories. An example of this is Rose D'Sa, a British woman with Kenyan and Goan roots who has been serving for 22 years as member of the European Economic and Social Committee (EESC).


The human side of Brexit: the last goodbye to Brussels of a British representative with Kenyan and Goan roots Brexit is now a fact. As from February 1, 2020 and after a long negotiation the UK will officially leave the EU. Apart from the political and economic consequences, Brexit is behind of many personal stories. An example of this is Rose D'Sa, a British woman with Kenyan and Goan roots who has been serving for 22 years as member of the European Economic and Social Committee (EESC).
Dr. Rose D’Sa was the longest serving female UK member of the European Economic and Social Committee (EESC), the EU advisory body in Brussels that represents civil society. For five consecutive mandates, she was chosen by the UK Government and confirmed by the Council of the European Union.
On 22 January, when she attended her last EESC plenary, this journey came to an end. On that day, the EESC paid tribute to its British members with a moving ceremony where many personal feelings and emotions surfaced. On that occasion, the 24 members representing the United Kingdom received a commemorative medal and a certificate, and some of them took the floor to say their last goodbye to their colleagues, to Brussels and to the EU. One of them was Rose D'Sa, who spoke as the longest UK serving woman member of the EESC. In her speech, Ms D'Sa expressed her sadness for the UK leaving the EU: "The EU has lost my adopted home country, the United Kingdom: a permanent member state of the UN Security Council and a wealthy, influential, enterprising and wonderful nation that fought to liberate Europe in two World Wars. It is a catastrophe."
In addition to sadness, Ms D'Sa also voiced some criticism of the EU and European leaders: "Can the EU yet choose to examine its own conscience, or will it simply move on with business as usual? Has it perhaps pressed too quickly for the ideal of ever-closer political and economic Union within our lifetime? Was it worth losing the UK for this ideal?" These were the last words pronounced by Ms D'Sa as member of the EESC after 22 years serving as UK representative.
She was appointed for the first time in 1998 and has since contributed to the drafting of numerous EESC opinions, especially those of key constitutional significance such as the reform of the European Treaties, as well as many issues connected with the single market. She is especially valued for her ability to explain and clarify complex legal problems and to persuade people to reach consensus on controversial subjects.
A long journey to Brussels Dr D’Sa, a British national living at Newport in Wales, was born in Kenya. Her ancestry is from Goa in India. She was educated at Loreto Convent in Nairobi and at Millfield School in Somerset, England, before graduating with a first class honours degree from the University of Birmingham and then gaining a PhD in public international law.
After qualifying as a barrister, she became Visiting Lecturer at the Kenya School of Law and held lectureships in law at Cardiff and Bristol Universities. Later she worked at the Commonwealth Secretariat in London, where she assisted Commonwealth governments on compliance with international human rights law. Dr D’Sa subsequently became the first Professor of European Law at the University of Glamorgan in Wales and was awarded a Jean Monnet chair in European Community law by the European Commission. Her many publications include European Community Law on State Aid (Sweet and Maxwell, 1998) which has a foreword by Lord Neil Kinnock, the former European Commission Vice-President.
She also worked as a specialist consultant to the Cardiff law firms of Geldards and Morgan Blake. Dr D’Sa won the “Welsh Woman into Europe” prize in 1995 and a decade later was honoured by an invitation from Queen Elizabeth to a State banquet at Buckingham Palace, together with her husband, John Matthews, an Emeritus Professor of Physical Geography at Swansea University. She is an only child and attributes her career success to the encouragement of her father, Alex D’Sa from Vagathor, Anjuna, Goa, before his sudden death whilst she was still young, and the support of her mother, Annie D’Sa, née Mendonça, of Nairobi, Kenya and Soranto, Anjuna, Goa, who recently died in Nairobi. She has other close relatives as well as in Germany, Canada and India.
Rose was the number 3 ranked tennis player in Kenya in 1975 and has been ranked 13 in Great Britain in the over 55’s. She has played international seniors tennis for Wales and represents the East Glos Club in Cheltenham. Her love of sport was fuelled by her uncle, Aloysius Mendonca, a renowned hockey player who represented Kenya in four successive Olympics.

This international and multicultural journey led her to Brussels more than 20 years ago. "For me, it has been a long journey to Brussels; I was born in Nairobi, Kenya in Africa to parents whose ancestors came from Goa, in India. I never imagined that I would one day be privileged to speak as a citizen of the UK in Europe", said Ms D'Sa in her address to the EESC plenary.