If you only read one book ... this could be the one!

Anti-Semitism and an author’s walk down memory lane 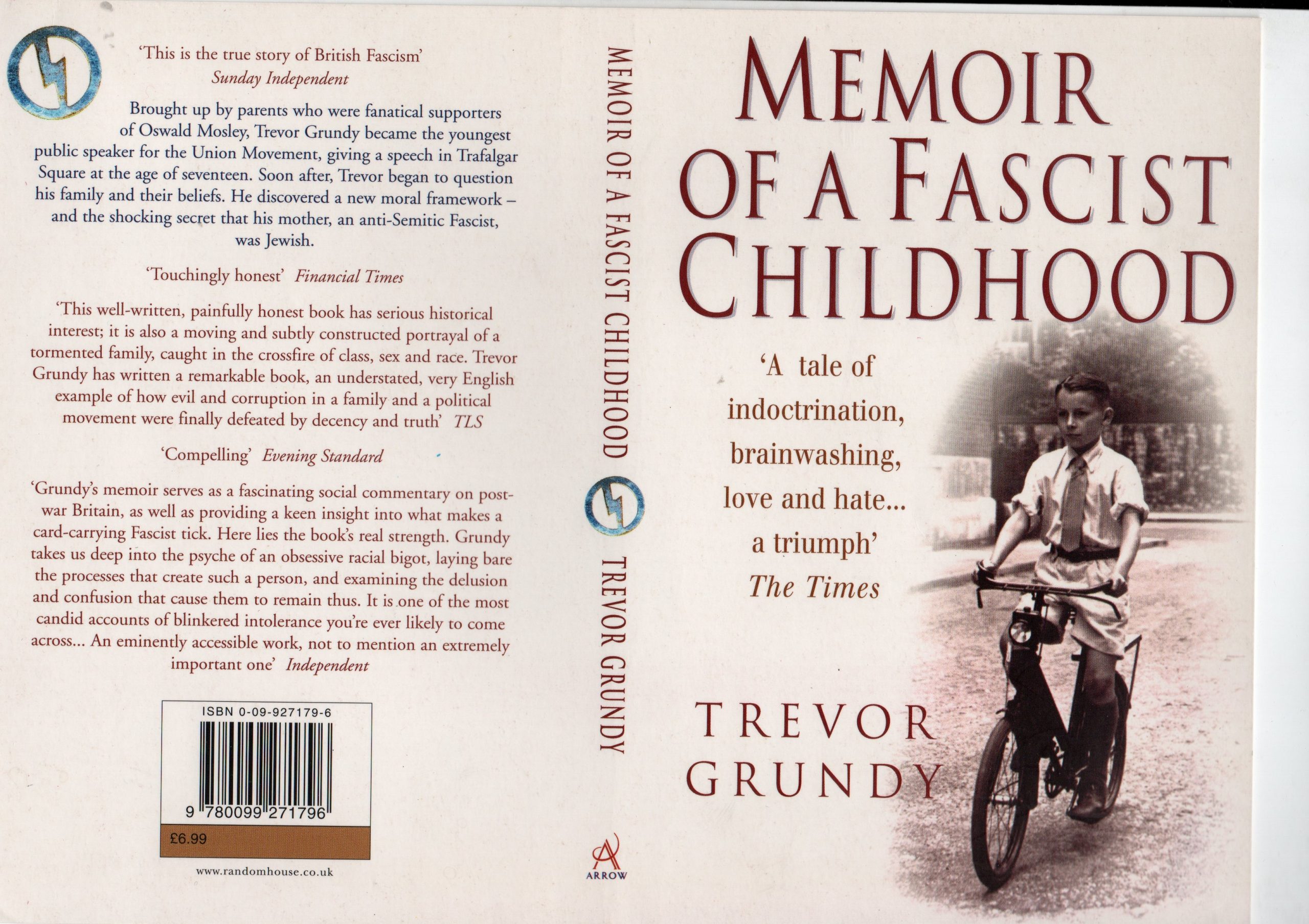 Memoir of a Fascist Childhood by Trevor Grundy (William Heinemann, 1998 and Arrow Books 1999) Literary agent in 1998/1999 was Giles Gordon, Curtis Brown, London
Also available on Amazon
Reviews of this 20 plus years old book were published in several magazines and newspapers in Britain.
They included articles in The Jewish Chronicle, the Jewish Quarterly and one by the Jewish affairs correspondent of The Tablet.
All the comments made by Jewish writers about the fascist phenomenon before and after the last world war were fair, balanced and constructive.
After my book was published, I made a short tour of Israel in 2000 and spoke to rabbis, students and ordinary Jews about Mosley in the 1950s and 1960s.
The following year, I completed a tour of colleges in different parts of the UK with large Jewish student intakes.

Trevor Grundy (right) with Sir Malcolm Rifkind at the home of the former British Foreign Secertary in 2000 in Edinburgh. There Grundy spoke to a large collection of prominent Scottish Jews about his childhood in the Mosley Movement in the 1950s and early 1960s. (Picture: David Kaplan)

In 2009, the former Archbishop of Canterbury, Dr Rowan Williams, described the book as “an extraordinary chronicle“ adding, “I wish all those who are inclined to underrate the corruption potential of fascism could read and digest this.”
With the appalling rise of anti-Semitism in this country, in Europe and in the USA it might be a book to show to young people tempted to support race hate organisations. And there’s plenty of them.
The late David Cesarani, one of the world’s leading authorities on the Holocaust, urged me to write a follow – up after I told him in London that I had cut out ‘quite a lot’ to protect, not the dead but the living, people I once knew and loved.
Today, almost all of them are either dead or have left Britain. For me, the road is open once again.
“Give me the child of seven and I will give you the man,” said St Ignatius Loyola.
How I hope he was wrong.
It is possible to change but it takes luck as well as determination.
I was saved by chance – meeting a man who turned my fascist world upside down and inside out and education.
I do not know if my 1998 book has a message to anyone perplexed by race and religion today.
I hope it does.

In February 1998 the book was ranked as one of London’s best sellers by the Evening Standard. Extracts  were sserialised in the Daily Mail. 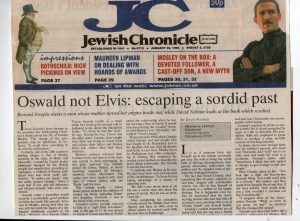 EVENING NEWS/EDINBURGH (Gethin Chamberlain): It is difficult not to be appalled by Trevor’s story. Although no longer a fascist, even now he will not accept Mosley, the man he worshipped as a child, was a demon.
THE TABLET (Emma Klein): Trevor Grundy first saw Oswald Mosley on a snowy night in February 1948 at the rally in Bethnal Green where Mosley’s new Union Movement was founded. He was seven and three-quarters – ‘an interesting age to meet Oswald Mosley ‘as he puts it ironically today. He recalls that his beautiful mother Edna, an ardent Mosleyite, touched her hero as he passed a gesture that seemed to imbue her with renewed strength. At the meeting, which was attended by over one thousand followers, Trevor heard the words ‘Jewish bitch.’ Next day in the playground of his primary school in North London he walked up to a pretty dark-haired girl never joined the other children for morning prayers. ‘Jewish bitch,’ he said. His life changed when he learnt about his mother’s Jewish origins. ‘It was a hand grenade that turned into a key.’
THE JEWISH QUARTERLY (Wendy Brandmark): Trevor was urged to lead the movement’s youth league but with an honesty that makes this book so compelling, he remembers his big moment in Trafalgar Square speaking to a group which seems mostly composed of hecklers. ‘The sequence was filmed in black and white without any sound and when I saw it later, it reminded me of a Charlie Chaplin film.’
THE (CATHOLIC) UNIVERSE: Trevor Grundy looks back to his childhood with anger and sadness. He understands exactly the kinds of people to whom extremists like Mosley appeal.
EVENING STANDARD (Nicola Tyrer): Grundy came back from Africa to write his book. Married for the second time, to a fellow journalist who helped him with the task of confronting his past, he now lives in Edinburgh. He could never have written the book in his father’s lifetime. ‘I was too frightened of him.’
THE CHRONICLE-HERALD /Calgary, Canada (Heather Mallick): Trevor Grundy’s tale of growing up in London after World War 11 in the care of British fascist parents takes the cake. It beggars belief that any child should have suffered this and grown up to be sane, much less the author of this utterly magnificent autobiography.
FROM INDIVIDUAL BRITISH WRITERS
Dr Rowan Williams (Archbishop of Canterbury):” . . . an extraordinary chronicle. I wish all those who are inclined to underrate the corrupting potential of fascism could read and digest this.”
Andrew Marr: I have had several unsolicited readers’ letters saying how much they enjoyed it and how moving they found your writing to be.
David Aaronovitch: Who can argue with a change of heart? But first you have to acknowledge the thing you were. Like Trevor Grundy, who was born two months before Max Mosley, into a family of Mosley foot-soldiers. In his wonderfully candid book Memoir of a Fascist Childhood, Grundy recalls how his parents took him, at the age of eight, to a rally where Sir Oswald Mosley launched the Union Movement (UM). It was 1948. After a while, the audience began chanting the old BUF slogan ‘The Yids, the Yids, we’ve got to get rid of the Yids.’ Then someone started up with the movement’s song. Those of you who know the tune of the Horst Wessel Song can sing along.
David Cesarani: There is clearly a lot more to your life than that the chapters chronicles in Memoir of a Fascist Childhood. I look forward to the next book.
Rabbi Jonathan Romain: I have read it and can recommend it.
Fred Bridgland: Your book is one of the bravest and most memorable books I’ve ever read.
John Goldsmith: I would give it five star status for the lean and simple beauty of its prose, its unflinching honesty, and its poignant – at times almost unbearable – depiction of your mother in all her wonderousness and monstrousness and the weird secret she guarded from you for so long; for the limpid humour and evocation of character. But above all for shedding light on a world that has been a sort of appalling taboo in this country and which I think I now begin to understand a little. It’s a riveting read. It would make an amazing film. If one had the courage.
Uberto Pasolini: I think this is an understated, intelligent and insightful book which is successful above all in highlighting the banality of evil with a drab, working class context. The depiction of 1950s fascism is extremely convincing and at times fascinating, showing the all too recent support this could garner.
Libby Purvis: In his fascinating autobiography, Trevor Grundy has told the rarely told story of what it was really like for a working class boy inside Oswald Mosley’s movement.