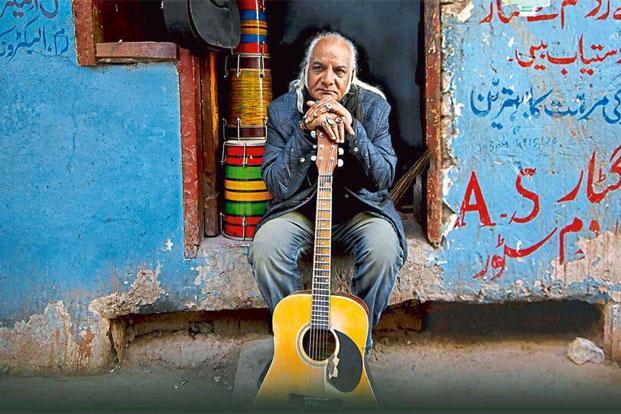 In 1977, the conservative Islamic regime of Ziya-ul-Haq, who banned
Almost all secular music, came to power in Pakistan. This repressive
policy hit the residents of Lahore, traditionally considered the musical  capital of Pakistan, leaving many musicians out of work and forcing them to hide.
(I don't know the name of the magazine I picked this up from, apologies. Title in a distant language untranslateable.)
In the early 2000s, Pakistani millionaire Izzat Majid brought together the remnants of Lahore’s music circles in his Sachal studio, trying to restore his lost musical heritage. Influenced by his childhood interest in American jazzman Dave Brubeck, he created the Sachal ensemble, which combines the features of traditional Pakistani music with Western pop and jazz.
During their recent tour in the USA, performing in Saratoga, the ensemble performed a mixture of traditional Pakistani music, original compositions by Majid and conductor Nidat Ali, as well as several Western tunes, for 70 minutes.
Opening the concert with a purely Pakistani folklore performance, the ensemble played a tune from the famous musical Rogers and Hammerstein of the show, the tune “Some Enchanted Evening”, so that the audience could hear for the first time how the ensemble masterfully masters the classical themes of Western jazz music. Then other tunes sounded, such as Michel Legrand's composition Windmills of Your Mind, Henry Mancini's Pink Panther theme, and Ben King's classic Stand by Me, followed a clear pattern.
The piano and electric bass performed the main theme, setting the basis for the structure of each melody, which allowed percussionists, flutist Bakar Abbas or the master of the “saranga” (Indian string instrument - Islamosphere) to solo or add improvisations to the melody, taking the viewer from the sound palette of the Western hemisphere and feel in South Asia.
Although the ensemble demonstrated by its performance of cover versions of well-known jazz compositions that it could successfully mix Western motifs with traditional Indian music, their original works showed a better mix of cultures. Majid’s songs “Shalimar” and “Lahore Jazz” rely on melodies written under the influence of American jazz bands on the west coast of the 1950s, but they intentionally included Pakistani classical and folk motifs in their current American tour program.
To hear their wonderful music google YouTube Sachal Take Five
https://www.youtube.com/watch?v=xYGZXUXwVFM&list=RDxYGZXUXwVFM&start_radio=1