Doc
Tears for a Goan icon 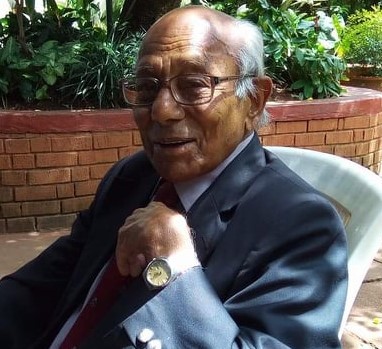 Dr Manu (Manuel) D’Cruz was an outstanding Kenyan Goan Ear Nose and Throat consultant physician and a consultant sergeon who graduated in Edinburgh. His passion for treating the sick, especially the poor villagers miles away from major town centres, had to be seen to be believed. Nothing would stop him driving 200 miles unless, of course, his beloved Volvo was Ill. He was recognised as a great Kenyan when  President Moi bestowed on him the Order of the Great Warrior. As you will see he was also a devoted Goan. On the social scene, of course, his first love was the Nairobi Goan Gymkhana. He served as president/chairman countless times and was always ready to put up his hand if there were no one else for a committee post. He was also a dedicated Rotarian and was regularly lauded for his work with the organisation. I have left the tributes below to speak in their owners’ voices. He was born in Saligao, Goa.

He passed away yesterday after a three week battle for his life. He had fallen an suffered an injury to his head and has been in a coma since October 31. He is survived by his wife Dr Clara and his sister Lillian Castellino.  Cyprian 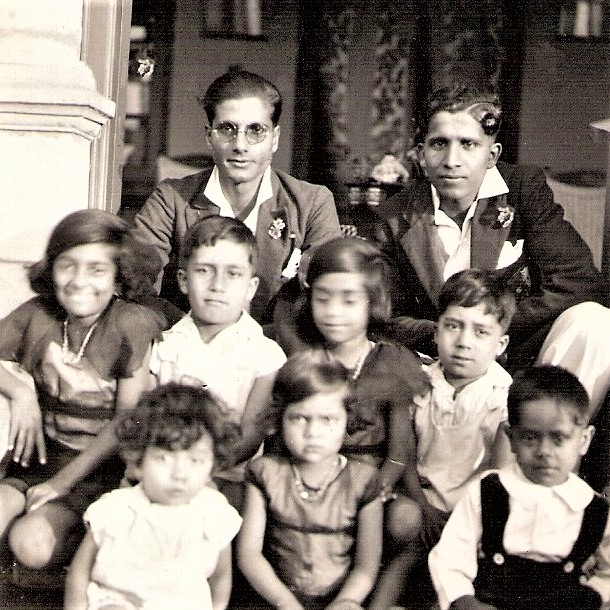 Also found this photo was taken with Manu, Lillian and me with our two Aussie grandchildren: Henry (son of Pollyanna) and Aliya (daughter of Josey). 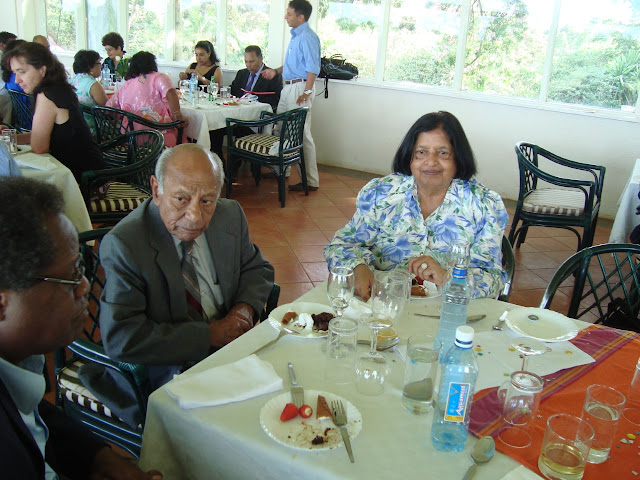 JERRY LOBO: We all have very fond memories of Dr Manu. I still recall a trip to Mombasa in the early eighties. I went with Dr Manu and Dr Clara in his white Volvo 244 “KQT 243”.
He was a very skilled and fast driver I must say. We left early and were in Mombasa for lunch.

During this trip and while we were at the Mombasa Institute, I felt a sore throat coming along and told my mum about it. She suggested I speak to Doc and so I did.
He looked at me and said come with me. I thought he was going to his car to get me some medication. Instead, we headed for the MI bar and he ordered me a nice shot of Brandy which did the trick….

I did a few trips to Nairobi recently and wanted to meet Doc Manu. I was told best to be at the GG at 12:30 pm sharp on a Saturday. Like clockwork, Dr Manu arrived and ordered a cold Tusker and some hot Samosas! We enjoyed our meeting and he insisted he buys me a drink instead of the other way round – that is Doc Manu.
Before long he was gone. Dr Clara was waiting for lunch.


JOHNNY AND MAURA LOBO: In the 1920s in Kenya we were close family friends and neighbours with the D'Cruz family and our friendship has continued with Manu and Clara till today. I am reminded of one afternoon in our earlier years when
we saw Mrs D'Cruz carrying Manu in her arms, running towards our house and screaming to my mother that her little boy was dying. My mother opened the door and Mrs  D'Cruz told her Manu had stuffed a corn seed in his nose, stopped breathing and turned blue. My mother who was crocheting at the time had the presence of mind to use the crochet needle and with a steady hand dislodged the seed and Manu began breathing again. Manu told us while growing up he heard that story many times from his parents, and it was one of the reasons he was inspired to become an ENT.

When Manu practised as an ENT Consultant our memories of him were of a loving, compassionate gentleman. We had six children who he was very fond of. Whenever I took them for a checkup he would come out and say "my girl what's the problem and which one of them is it this time". He was always so kind with his words and deeds and looked after us all with such care. Our family till today has very fond memories of our dear
friend Manu.

Dr Manu D'Cruz was founder of the Goan Cultural Society in Nairobi, Kenya and contributed to the success of uniting the Goan community under the umbrella of cultural and social gatherings. These included the Annual Mando and Theatrical Festivals promoting and showcasing our Goan and Portuguese heritage through music, song and dance. He also presented them with an annual trophy in the shape of copper ghumot (a traditional Goan clay pot with a leather tied firmly at the opening and another at the bottom. It is often referred to as the national instrument of Goa.)

Through this society, we inclusively and for the first time in our history, reached out to the local Kenyan people and trained them to perform and participate in the singing of the Mando. A notable record of Manu's contributions to our Goan society in Kenya.

CYPRIAN FERNANDES: When I first met Manu D’Cruz not many Goans actually knew what a medical consultant was in those early days. Neither did I. I would pop into his office in Vedic House on my way to the Court House, City Hall for coffee with the lawyers or a snack at one of the nearby outlets.
On the third or the fourth occasion, this is how the conversation went.
“Doc, why do you say enter after your name and degrees on the door?”
“Where? Come show me.”
So, we went to the culprit door and turned it around.
“That is not “enter”, it is short for Ear, Nose and Throat (specialist consultant).”  And after an hour at the Queens’ Hotel (Brunners), a roast beef sandwich, a plate of sizzling chips and a glass of this and that …I was somewhat familiar and for the rest of the time, I was in Kenya until 1974 he would either ring me up or meet me to tell about this or that advancement in ENT.

Another friend popped in for a chat with Doc. During the course of the chatter, Doc was irked by something in the man’s throat or nose and he had him quickly in the treatment chair. After a couple of minutes of examination, Doc told the guy to go and see Dr Paes because “you may be coming down with the flu and suffer some pain in the throat.”
A few days later the man was back.
“Why did you send me this bill for 70 shillings? You did not treat me or give me a prescription. I did not ask you to look down my throat … I thought you were being a friend, friend … anyway, you are not a doctor. As a consultant, you probably only write reports”
“Yes. I might have saved you from something far worse, now pay up.”
“I will have to do it in instalments”
“OK. But don’t forget.”
I don’t think until the man’s dying day that Doc ever saw a cent. I asked him why he did not pursue it and he just shook his head. “I see him regularly at the Gym and sometimes at the GI, we just smile at each other.”
There were thousands that Doc treated around Kenya, all free of charge.
This was a kindly man, a generous man and always the epitome of a blessing to his community, his friends and his patients. For a somewhat small man, Doc was blessed with an energy that a herd of elephants would have been proud of. Unlike the elephants, he moved quietly, always elegant in dress and always eager to lend a hand whatever the problem may be.
We had long hours of talks about the Kenya Hockey Union and his passion for improvement. He had a huge imagination and lofty ideas. Once, he even thought that game, could go professional, like English soccer already had. But “in Kenya and one murram ground at City Park?” and his answer was: You never know. Time will tell.
We rekindled our friendship when he was on a brief visit to Sydney. I was president of the local Goan association and he seemed to spend every moment encouraging me to greater deeds in the service of the local Goan community… that elephant stubbornness.
I am sure he infected everyone he met with his passion and enthusiasm, especially in medicine (healing the sick) people generally but especially the Goans, their music, their food, their dances (although I can’t remember him dancing very much in those early days) and of course their sport.
Doc was that kind of a guy, just one of kind, the very good kind, and the world is surely the poorer for his passing.

BRAZ “Matata Books” MENEZES: Manu was senior to me by about 10 years. I knew him growing up as his father was very active in the Goan Gymkhana. He left for boarding school in Goa or Bangalore in about 1948 and didn’t return to Nairobi for about 25 years.

Thereafter, we met each other regularly at the club. He was always very involved in the club’s activities, on every committee, and was never short of ideas for moving the club forward. I enjoyed the early days as we all had time on our hands, and until his dear Clara came along, his evenings were free.

He was the first responder at my mum’s last hours she collapsed on the GG’s dance floor on December 26, 1967 (as I described in my latest book Among the Jacaranda.)

FELIX & HAZEL NAZARETH: Doc was born on the 25th of December and christened Manuel J. D’Cruz. He was the founder of the Kenya Ear Foundation. He used to travel the length and breadth of Kenya in his beloved Volvo checking the ears of everyone who would let him especially in the bush. He charged them nothing. This was his passion and labour of love. He also used to bring doctors from India to help on his mission to help the poor.
During the presidency of Mr Daniel arap Moi, Doc was recognized for his dedication and passion and services for the people of Kenya and decorated with high Kenyan honour.
He was also a Rotarian. He was also almost the permanent president of the Goan Gymkhana and was involved with the Goan Welfare Society (which survives well to this day) and he was a staunch supporter of Goan sports in Kenya.
He was a very generous and kind person. He would not let anyone sit alone, he would take them to his friends and introduce them.
He was very much the son of the earth because he loved going camping all over Kenya. He used his surgical skills in deftly skinning whatever was going to be on the menu that day.

VICTOR and  MONICA NAZARETH: Doc Manu as he was known to his friends, which was a very wide circle in Nairobi, Kenya, in the Goan Community and beyond.

He was greatly involved in his Medical profession and after hours he had a finger in every pie. For starters, he was involved with the Goan Gymkhana, just like his father did. Manu was responsible for starting up the Goan Cultural Society and organised the first Mando Festival. He had a hand in setting up The Goan Welfare Society. His next venture was to start clearing up the cemetery, which he happened to discover, in Nairobi South 'B' which was the resting place of the early Goan Pioneers.
Manu was a great Goan going back to his roots in Saligao, Goa and was very much involved in celebrating the Saligao feast in Nairobi
He was a Rotarian and helped a lot of organisations that needed help financially or otherwise.
Manu was a sportsman, played Badminton and got himself in the hockey administration.
At the weekends he would accompany us into the 'bush' camping. He loved fishing and would help with the cooking. He also loved his glass of beer.