Albert Castanha: aka “Legs Castanha” or “The Cat”. The late sports genius began playing football while at school. He went on to play for the Mombasa GI “A” team and played in all the Coast Province Football tournaments as a centre forward. Later he moved to the right-wing but injuries forced him into the 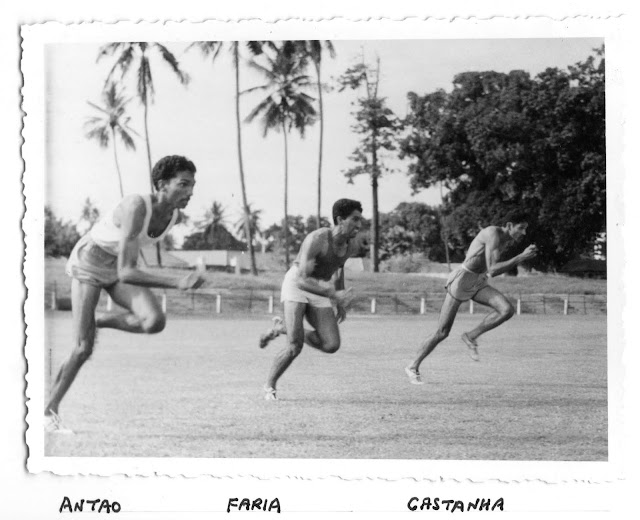 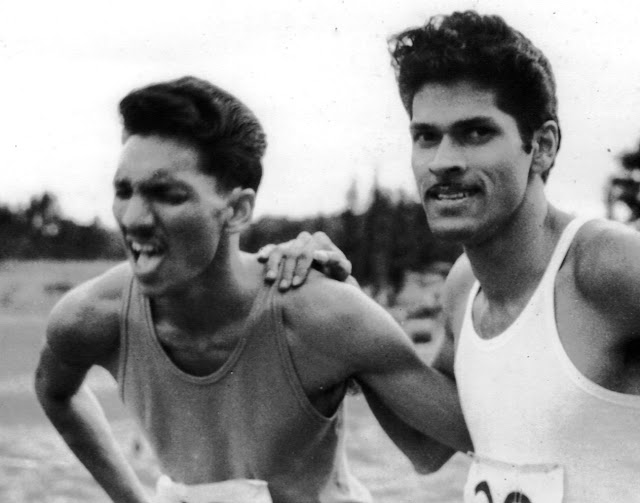 Two of the greatest: Seraphino and his great rival Albert Castanha after a
tightly-fought race

goalkeeper position where enjoyed stunning  success.  He  was  selected  for  the  Coast provincial team and played for them from 1958 to 1963. He later joined the Liverpool Football Club where they won all the tournaments. He played in  goal against such big name teams Mohan Bhagan of India, A.I.K Sweden, Tanzania Combined   etc.

His big moment came when he became one of the few Goans to represent Kenya   in the Gossage Cup, the premier Kenya, Uganda, Tanzania triangular tournament. Other Goans who played  in  the  Gossage  were  Alex  Fernandes,  Oscar  D’Mello,  and Saude George. Albert also played for Kenya in various internationals. Albert captained the Coast Province team from 1959 to  1964  and  was  the  provincial  coach  from  1958  to 1963.

He was easily recognised as the greatest Goan all-round Goan sportman of his time. He was brilliant in soccer, hockey, cricket, athletics (sprinting), badminton and virtually any sport he put his mind to. This was indeed a great Goan. Perhaps the greatest Goan all-rounder anywhere. Soccer, hockey, athletics and much more,  he was brilliant in almost every sport he played. He played for the MGI for 30 years, captained it often. He played for the Coast XI from 1955 until 1970. 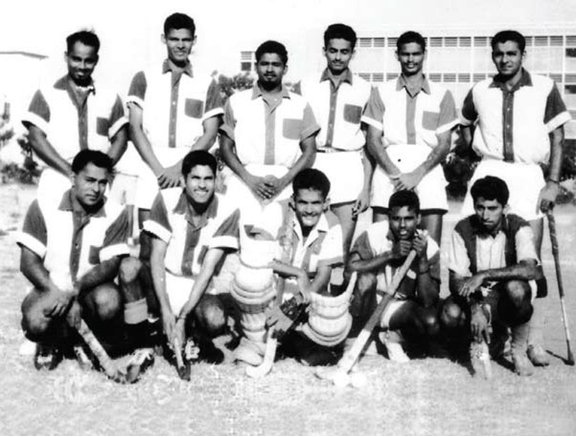 He was also the Coast provincial coach. The Kenya Hockey Union sent him to Karachi in    1981 for a prestigious coaching course.   He played on the left-wing, inside left or left half. His first match was in 1955 and his last for the MGI was in 1990. What an absolute champion.  Deserved international representation.

He was awarded the Victor Ludorum (the best all-round athlete) in 1955 and 1957. He captained  both  the  Coast  and  Mombasa  GI teams for many years. In 1956 he equalled the Kenya 100 yards record. He was part of the 100 yards Kenya relay team that set records in the East African Championships. He was a contender for the 1956 Olympics but was disappointed by the selectors. In 1960, he won both sprints at the MGI, Coast, Kenya and East African meets. His best times were 9.6 and 21.3. Unfortunately, there was always one man, Seraphino Antao, who stood in his way to international stardom. In 1958, for example, Ali Yusuf, Albert and Seraphino tied for the fastest 100 yards in Kenya with a time of 9.8. The battle for supremacy between is the stuff of movie blockbusters. There were many times when Albert outraced Seraphino  and vice versa.   The third 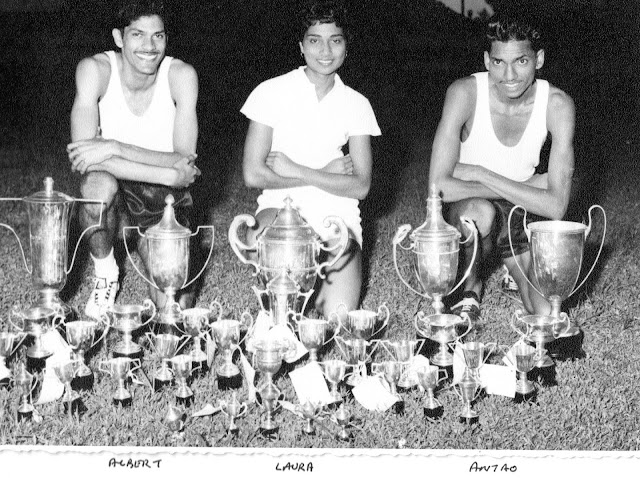 Sprinter Laura Ramos with two fo the greatest Goan sprinters of all time, Antao and Castanha

musketeer in this trilogy was a guy called Ali Yusuf and fourth Joe Faria, all from the Coast, who was just as fast as each on their day.  At a GI Nairobi meeting,    for example, Albert beat Seraphino in both sprints with Eddie (?) Rodrigues filling the third birth each time. A few other interesting results at the same meeting:  440 yards: 1. S, Antao, 2. R, Caiado, 3. Bruno De Souza. 120 yard hurdles: 1.  Mario. Carvalho, 2. A. Castanha, 3. S. Antao. High Jump: 1. S. Antao. Pole vault: Anthony Vaz, 2. Avito D’Souza, 3 Murian D’Souza.

However, when competing for selection in the 1956 Olympics, Albert ran fourth in the 100 and second in 220. He did not get a place in the team. 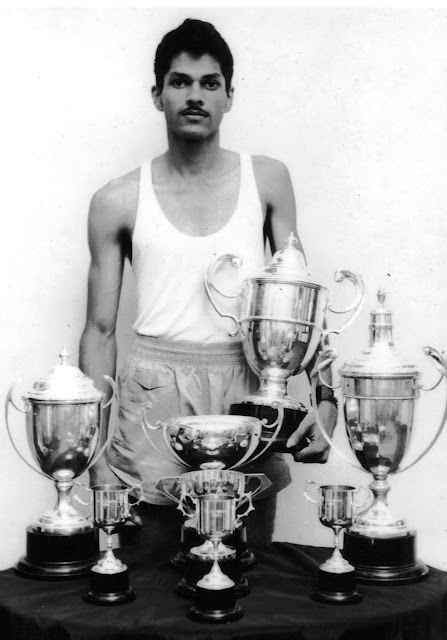 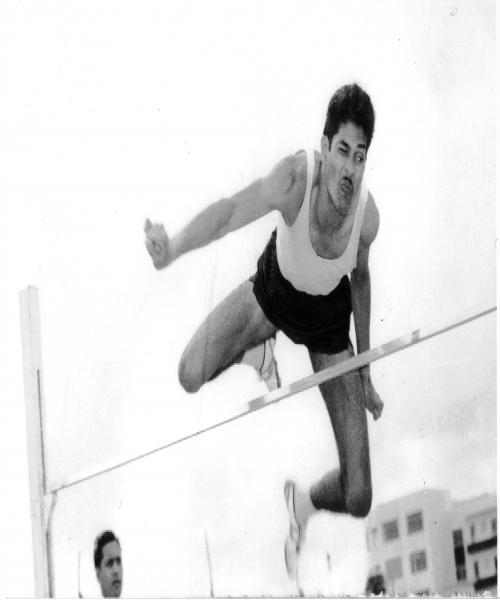 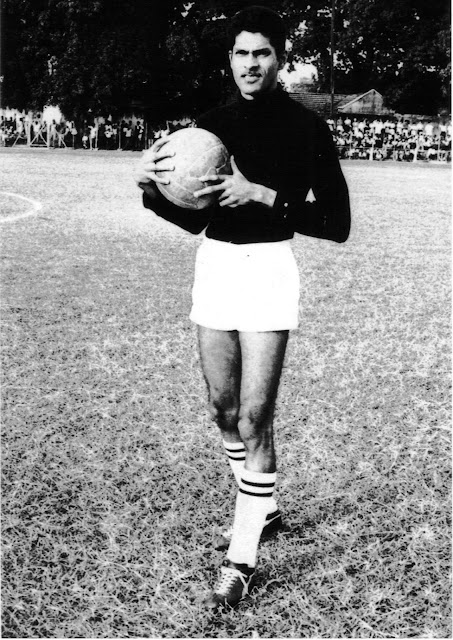